The Quad: Exploring anti-sleep culture, how students may be affected 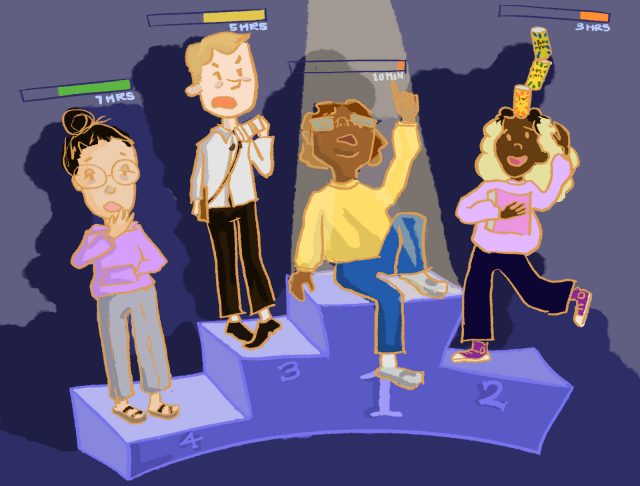 Picture this: You sit down for your 8 a.m. final and find yourself yawning and complaining that you only got, say, four hours of sleep, only to have your classmate one-up you and say they got two.

Although this competitive sleep-deprived college student is a common image, the culture that surrounds it is a dangerous and romanticized illusion.

Around 46% of students report not getting enough sleep five to seven days of the week, according to the American College Health Association. In addition to this deprivation of sleep, students may mask it with acceptance and glorification. And what’s generated in return? The toxic sleep culture.

To zoom out, the anti-sleep culture we see today didn’t necessarily begin on college campuses. In fact, a poll done in 2018 found 65% of American adults believed sleep was instrumental to next-day productivity – yet only 10% prioritized it among other categories such as fitness/nutrition and work.

This issue is further perpetuated when some of our nation’s biggest names such as the former CEO of PepsiCo, Indra Nooyi, Yahoo!’s former CEO Marissa Mayer and even President Donald Trump publicly boast about their lack of sleep. Despite immense productivity being a result of their three-to-five hours of slumber, it dangerously implies that sleep is a futile and needless activity, The Daily Beast writes.

Some people may have an anti-sleep mindset ingrained in them. And with a staggering 70% of college students reporting an insufficient amount of sleep, the challenge is only exasperated during the university experience.

Around 2011-2012, a Red Bull poster preaching that “Nobody ever wishes they’d slept more during college,” found its way on several campuses, including UCLA.

Not only do such advertisements foster negative rhetoric surrounding sleep, but they target a community that already is lacking in sufficient sleep.

Psychologist Roxanne Prichard from the University of St. Thomas in Minnesota has researched this subject since 1999. In an article for Boston College Magazine, Prichard said the most consequential shift in our sleep schedules since the end of preschool naps is experienced during the first year of college.

The challenge Prichard describes has fortunately been recognized – not only by college students themselves – but also by companies seeking to uncover the sleeping patterns of students. In particular, the fitness group Jawbone complied data tracking 1.4 million nights of college students’ sleep and its figures conveyed a compelling correlation: the more highly ranked the school, the later the student’s bedtime.

Third-year psychology and cognitive science student, Pranav Meda, can attest to these challenges, admitting his sleep schedule is inconsistent and he is often tired.

Similarly, Dana Wilks, a third-year economics student, said although she strives for a healthy amount of sleep, she knows many people don’t.

Of course, heavy course loads and busy schedules are common to a majority of students, and despite attempting to strike a balance between various responsibilities, sleep may often not be a priority. But when did sleep become an afterthought?

In an attempt to better understand this trend, Abigail Williams from the HuffPost has traveled across U.S. colleges, UCLA included, discussing college sleep culture with students. In Yale Daily News, Williams said the mantra “I’ll sleep when I’m dead” was a common justification for poor sleeping habits, in addition to a general acceptance of sleep deprivation as essential to the college experience.

However, what was particularly revealing from Williams’ visits was the cultural association between college life and lack of sleep: Students are staying up late even without academic or extracurricular stress.

Roni Touboul, a third-year biology student, described a similar association, explaining she tends to feel guilty when her roommates are doing work and she is getting ready for bed. In return, she will sometimes stay up later than needed.

Meda also said he feels weird going to sleep if his roommates are still up. He surpasses his tiredness and stays up late because he feels pressure to.

The root of this issue, according to UC Berkeley professor Matthew Walker, may partly be attributed to the stigmatization of sleep.

In an interview with The Guardian, Walker said we advertise our minimal hours of sleep because we want to appear busy. It’s a badge of honor, he explains.

According to Walker, people may be scolded and ridiculed for meeting the most basic shut-eye recommendations. Consequently, those who need eight or nine hours of sleep are embarrassed to publically admit it – they think they’re abnormal.

The stigmatization Walker describes surrounds us. So much so that it has even been translated to the common “college language” of memes. Photos with labels like “haha i only got 4 hours of sleep last night,” followed by “i only got 1,” as well as other jokes poking at sleep, regularly circulate college meme pages.

Although masked by satirical humor, conversations with a similar sentiment can be overheard in UCLA lecture halls, Powell Library bathroom stalls and even apartment parties.

Luckily, this issue has not gone completely unnoticed on campus. In 2013, UCLA’s Healthy Campus Initiative, or HCI, was launched – aimed to inspire a culture of health and wellness. Its efforts comprise a variety of resources, including campus napping locations, educational events and sleep optimization advice.

Interns at the Undergraduate Students Association Council’s office have also recognized the importance of mental rest, organizing a Sleep Week in 2015. One of their major initiatives during the week was a nap room in Powell Library, which could be a promising resource to reintroduce.

With finals looming around the corner, a need for a cultural shift in mindset is a particularly pressing matter. Our biggest accomplishment shouldn’t be watching the sunrise in Powell Library. Perhaps it should be a lot more simple: getting enough sleep.