The Quad: Examining what human trafficking is, misconceptions surrounding it 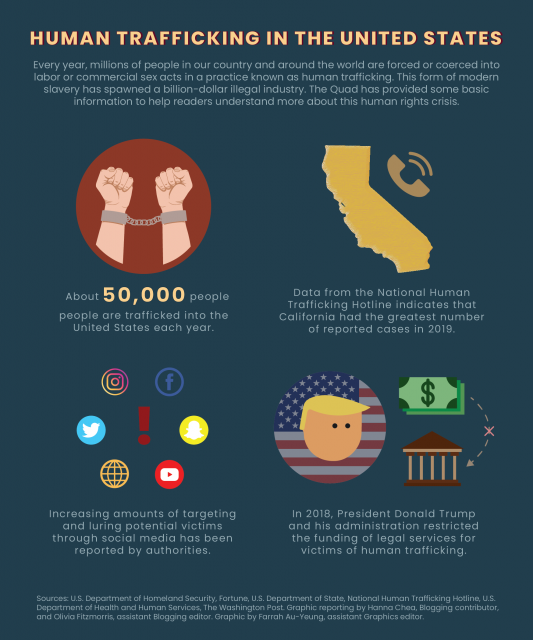 Today’s reports are plastered with breaking news, but there are many persistent problems looming in the shadows of every headline.

Human trafficking is an ongoing crisis that is not limited to the developing areas, brothel settings, which the media may often depict. In fact, college students can also be at risk of being trafficked – factors like exposure to large social gatherings, unprotected social media accounts and thinning wallets can make students a favorable target to traffickers, according to The National Center for Campus Public Safety.

What is human trafficking?

To begin, human trafficking is the practice of controlling and exploiting human beings for profit, making it one of the most lucrative forms of modern-day slavery, according to an article by The Guardian. This $150 billion criminal industry is profiting in areas closer than you think – for example, Los Angeles County, which is one of the United States’ epicenters for sexual exploitation and child trafficking.

According to the International Labour Organization, approximately 40.3 million people were trafficked globally in 2016. People can be trafficked for a range of illegal commercial industries, including organ removal, prostitution, marriage and labor.

Marit Frost, a third-year geography student and vice president of UCLA’s LA Stop the Traffik, said human trafficking is currently one of the most profitable illegal businesses.

“It is the fastest-growing illegal commercial industry in the world and it’s about to surpass drugs for how lucrative it is. … Selling people is worth more and less risk to traffickers than drugs or guns,” Frost said.

Mary David, the director of communications of Journey Out, an LA-based nonprofit that provides services to sex-trafficking survivors, also said certain demographics such as women of color, boys and transgender youth tend to be unacknowledged despite making up a large portion of trafficked individuals.

“If you are talking about an American victim, you might see a blonde woman,” David said. “And while, yes, they are certainly also victims … our most marginalized communities … are so overlooked.”

Past and present policy pertaining to human trafficking provides insight into the ways this global crisis is handled at a federal level.

Human trafficking was made a federal crime in 2000 with the Trafficking Victims Protection Act under Bill Clinton. Since then, initiatives to combat human trafficking have developed, including revisions to the TVPA and dispersed responsibility among the FBI, Department of Homeland Security, Judicial Department and social service agencies. Doing so allows federal agency workers to tackle specific tasks, making it easier to combat the overwhelming issues of trafficking.

Oftentimes, individuals trafficked into the U.S. struggle to escape their traffickers because they do not have a legal job or an independent income. A visa created to reduce this issue is the T Visa, which allows people who have been trafficked and their immediate family members to stay in the U.S. and work temporarily.

However, President Donald Trump’s recent reversals on immigration policies impose stricter requirements to qualify for this visa, according to Frost. These qualifications include requiring proof of being a victim of human trafficking, such as court documents, witness statements or medical reports. Imposing these regulations can increase the likelihood of deportation, making it harder for certain individuals to apply, Frost said.

Outside efforts and increased funding to ground organizations can provide individuals who have experienced human trafficking with some of the help they need.

Nonprofit organizations like Journey Out and clubs similar to LA Stop the Traffik work to combat human trafficking from the ground. For example, Alyssa Gordon, fourth-year international development studies student and president of LA Stop the Traffik, said the club includes educational presentations given every week in general meetings and holds workshops for survivors of trafficking.

While there is a push for stricter regulation and stronger advocacy against human trafficking, common misconceptions and inaccurate data can overshadow the truth, David said. For instance, a popular and often dangerous misconception includes doubting the pervasiveness of the human trafficking industry.

“Usually what I tell people is LA is such a big hub for trafficking, and a lot of people are surprised by that I think because we still see trafficking as more of an international, a more broad, issue when it’s really not,” Gordon said. “It’s really here in LA, with trafficking in the fashion district as well as sex trafficking on Sepulveda (Boulevard). So I do think it hits closer to home and our community.”

While trafficking involving bringing foreign victims into the U.S. is a common practice, it is only the tip of the iceberg, David said. Trafficking can take advantage of online platforms, reaching individuals through the sites they may use every day, and it is not limited to disadvantaged neighborhoods – it can happen to anyone, anytime, Frost said.

Frost also said a lot of trafficking takes place online and in pornography and modeling industries, with Los Angeles being a particularly large hotspot for these businesses.

Additionally, trafficking in the news and other depictions in the media oftentimes only cover the surface of human trafficking’s pervasiveness, because the data and statistics do not account for the trafficked individuals who do not report or receive help for their case.

While resources are certainly an important platform to look to as a baseline for understanding trafficking statistics, numbers reported by hotlines and organizations are not always representative of trafficking’s reality, David said.

There are many ways individuals can help, starting with simply familiarizing oneself with what human trafficking is about. Helping victims can be accomplished in many ways, such as lending a hand to organizations assisting the human trafficking advocacy movement, supporting events in your local area or donating to advocacy groups, David said.

“If you’re good at finances, maybe it means assisting a nonprofit with any accounting needs, maybe it’s helping a client (learn how to) open a bank account or how to balance a checkbook,” David said. “There are ways for medical students who want to provide free checkups. … We need advocates in all spaces.”

Similarly, making conscious decisions in your purchases, specifically the clothes you buy, are important steps towards limiting the drive for labor trafficking, Gordon said.

Fast fashion refers to trendy clothing that is rapidly made and cheaply sold. Because of its need for quick and inexpensive manufacturing, the demand for cheap forced labor makes it one of the leading industries contributing to human trafficking. Limiting fast fashion purchases and buying responsibly made clothes made to last may be a pricier decision, but can ultimately save lives.

Making conscious decisions and aiding relief efforts may help get our world to the point where human life is no longer associated with a price tag. Recognizing how the trafficking industry is a lucrative business profiting off vulnerable members of any community is important in understanding its severity, Frost said.

“(Trafficking) is by many people treated as a business endeavor. … It is very much a growing industry and not just something we are fighting and getting over.”