The Quad: Exploring UCLA’s goal to be designated as a Hispanic-Serving Institution 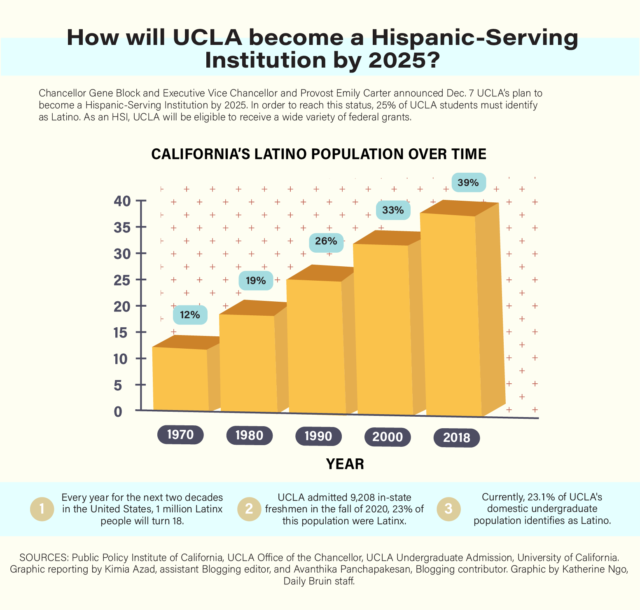 Correction: The original version of this article incorrectly stated 19.1% of UCLA's student population is Hispanic/Latino. In fact, 23.1% of the student population is Hispanic/Latino. The accompanying graphic also incorrectly stated 23% of the fall class of 2020 was Latinx. In fact, 23% of the in-state freshman admits for the class of 2020 were Latinx.

Despite roadblocks for a future of stronger diversity, UCLA has made a promise to increase representation in its student body through efforts to become a Hispanic-Serving Institution.

An HSI is defined as an institution whose student body is composed of at least 25% full-time Hispanic students. The designation originated in 1992 when a bill written by Sen. Claiborne Pell, a Democrat from Rhode Island, was passed by Congress.

Several federal agencies, including the Department of Education, the National Science Foundation and the National Endowment for the Humanities, allow HSIs the opportunity to apply for grant funding for their universities once the designation is reached.

There are currently 539 HSIs across the United States. Six of the nine UC campuses — Merced, Irvine, Riverside, Davis, Santa Barbara and Santa Cruz — are already HSIs.

Block and Carter said in their emailed statement the decision to become an HSI stems from the university’s public responsibility to serve California and the country’s shifting demographics.

The Hispanic community is the largest ethnic group in the state of California, representing 39.4% of the state’s population. Los Angeles, particularly, is 48.6% Hispanic/Latino.

The 23.1% of UCLA’s student population that identifies as Hispanic/Latino stands starkly against these statewide and citywide numbers.

Research professor and co-director of the Civil Rights Project at UCLA Patricia Gándara said given LA’s large Latino population, it is distressing that UCLA has not yet become an HSI.

“Los Angeles (has) the second-largest Latino or Mexican-origin population in the world, after Mexico City,” Gándara said. “(The Latino community is) obviously a very large and important part of the population area that UCLA serves.”

An HSI designation can increase attendance rates, improve academic performance and strengthen interracial relations among UCLA students, according to the emailed statement from Carter and Block.

Data finds that graduation rates at public HSIs are higher than non-HSI public institutions. According to the American Council on Education, 74.1% and 77.9% of full-time students at public and private HSIs respectively graduate within six years compared to the 42.7% federal rate for public universities and 49.1% for private universities.

To get a sense of what an HSI designation can bring, Bruins can look to UCSB. A mere 95 miles away from UCLA’s campus, UCSB was designated as an HSI in 2015.

Assistant director of the UCSB EOP Brenda Curiel said since the university became an HSI, campus diversity has not only increased over the years, but efforts and initiatives geared to support Hispanic students led by administrators have also risen.

“It has been great to see increased support on behalf of the university to support (first-generation) students and Latinx students,” Curiel said.

Over 26% of UCSB’s student population is Latino, which is greater than the population at UCLA, UC San Diego and UC Berkeley —the three UC campuses that are not designated as HSIs.

As a UCSB alumna and former financial aid staff member, Curiel said she has witnessed firsthand the broader range of UCSB students who come from diverse racial backgrounds and income brackets after HSI designation.

It is unknown how UCLA administrators plan to allocate funding if the university receives HSI designation. However, second-year public affairs student Hector De Leon said the Hispanic community at UCLA must be part of the decision-making process.

Though the designation is welcomed, there are a few areas where HSIs have fallen short. According to a survey conducted by Gallup, Strada Education Network and Excelencia in Education, 66% of HSI graduates found their alma mater’s career services difficult to navigate and access.

Third-year Chicana and Chicano studies student Jorge Cruz-Deleon said he wants more information on how UCLA will support undocumented and Hispanic students after being designated as an HSI.

“What resources are they really going to offer us?” Cruz-Deleon said. “Sometimes, to be a Hispanic-Serving Institution is like a little trophy they have. And we’re not trophies, we’re students. We’ve got feelings, we have needs.”