The Quad: Exploring how the term ‘Latinx’ has catalyzed a conversation on gender inclusivity 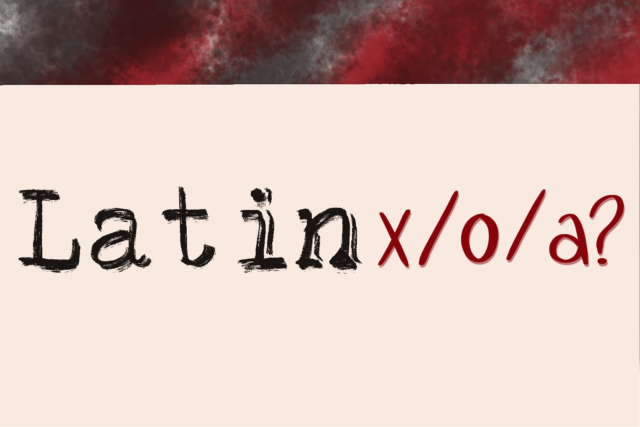 LGBTQ+ activists, allies and linguists have long advocated for gender-neutral language. But things can get complicated when words are gendered down to their very composition.

“Latinx,” a nonbinary word used to refer to people who are from or descend from Latin America, was added to the Merriam-Webster dictionary in 2018. It was first used more than a decade ago as an inclusive term to describe the larger population of Latin Americans.

The word Latinx was adopted to challenge the genderization of such nouns as either masculine or feminine — Latino or Latina, respectively.

Though the term Latinx may be common on campus or among young people, it has not been readily adopted by the greater community. According to a survey conducted by the Pew Research Center in 2019, only 3% of the Latino population actually uses the term Latinx. The same survey also found that 76% of Latino adults have not heard of the term.

The lack of knowledge or usage of the term, however, has deep roots in the identity of some Latinos.

English professor Rafael Pérez-Torres said the word “Latino” itself is not an embodied identity, but rather a political and social response.

“I think there’s a general resistance to the term Latino altogether,” Pérez-Torres said. “I think most people recognize it as a kind of categorical term that was developed for specific contextual reasons. Most people don’t self-identify as Latinos or Latinas or Latinxs.”

According to a poll conducted by the Pew Research Center in 2012, 51% of Hispanics most often identify themselves by their country of origin rather than Hispanic or Latino.

Pérez-Torres said he is not expecting the word Latinx to grow within the Latino community.

“I think it’s really kind of a U.S. import,” Pérez-Torres said. “It’s clearly an incorporated term that has been modified, and people recognize it as that. It feels like it’s a term that exists out there that people kind of have to accommodate to, but the term itself … isn’t really an embodied identity.”

For some Latino Bruins, challenges with gender inclusivity extend past the word Latinx and rather reflect a larger struggle with the genderization of the Spanish language as a whole.

“The reason why I use the term Latinx is because I understand that I (am) somebody who is privileged (as) a cisgender, who is heteronormative.” Cortez said. “I want to make sure that the language I use … is inclusive.”

But for others, the identity of Latinx is lost within the natural rhythm of the Spanish language. Pérez-Torres said there are elements of the term that make it artificial, such as the “X” at the end.

Cortez suggested that “Latine” may be a better term to use over Latinx, as it not only breaks the “O” and “A” gender binary of the word, but it also fits into the Spanish language more effortlessly.

The term Latinx also clashes with Chicanos and their preferred identity.

Chicana/o and Central American Studies lecturer Celina Martinez said there are some people of Latin American descent who prefer the term “Chicanx” over Latinx, citing feelings of historical revisionism when using Latinx to describe their Chicano heritage.

“Chicanos, in particular, have never adopted (Latinx),” Martinez said. “It’s just kind of going back and imposing that term on people that never have appropriated or chosen that term to describe themselves.”

First-year political science student Aaliyah Farias said homophobia within the Latino community plays a part in people resisting the use of Latinx in conversation.

Machismo, a social construct within the Latino community that conforms male-identifying individuals to specific societal roles, negatively impacts the view of LGBTQ+ individuals within the community, according to a study by the National Institutes of Health.

Farias added that while the Latino community has to come together to create a more inclusive environment, members outside of the community should use the term Latinx more frequently.

“I don’t think it would be appropriate for people who don’t identify as Latino or Latina, to try to address our issues (with homophobia),” Farias said. “I think it’s our own weight to carry. The term Latinx really has to be more popularized and if non-Latino folks can use the term that would be so awesome, just to start the normalization of it.”