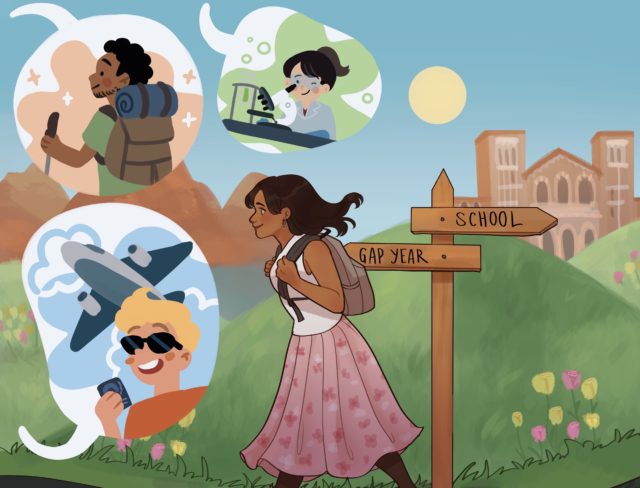 Four years of undergraduate and then straight off to graduate school – for so long, this has been a frequent track in our education system. However, several Bruins on the pre-med route have found benefits in taking a gap year before resuming the train.

Andrew Reyes, a fourth-year molecular, cell and developmental biology student, said he is currently planning on taking a gap year prior to entering medical school because of the MCAT and hiccups in course scheduling.

“I had classes I felt I needed to be prepared to take the MCAT, mainly biochemistry,” Reyes said. “I think I could have planned it out better, just in terms of my class schedule, and it really didn’t hit me that I’d have to take the MCAT so early.”

Trina Nguyen, a fourth-year molecular, cell and developmental biology student, also said the MCAT played a major role in her decision to take a year off before medical school.

“By the end of my second year, I hadn’t finished all of the bio, chem and physics series yet, and I knew I wanted to finish those before I felt prepared to take the exam, so I decided to postpone the MCAT until the summer of my third year, therefore pushing my application season a year back,” Nguyen said.

Fourth-year physiological science student Peter Tran said his decision to take a gap year came down to prioritizing an internship over studying for the MCAT.

“I actually encountered an internship at the Nagourney Cancer Institute, and this was during a time where I was studying for my MCAT,” Tran said. “I couldn’t really properly devote my time to both and do a good job, so I decided to delay the MCAT to the following summer, which actually forced me to take my gap year.”

For other students like Lucia Soto, a fourth-year psychology student on the pre-physician assistant career path, acquiring practical experience in both health care and the workforce was her primary reason for taking a year off.

“I really wanted to get hands-on work in the field before I started applying to grad schools because I don’t really want to go in very fresh, and I think the more experience you have, the more confident you are in the field that you want to go to,” Soto said.

Many Bruins, including Tran, utilize gap years to pursue jobs and opportunities that will allow them to build experience in their respective fields.

“I’m applying to a bunch of jobs with my degree, … trying to get more of a clinical experience and seeing how it’s like to work alongside doctors,” Tran said.

Some students also expressed interest in taking some time off to travel and relax during their gap years.

“I also knew that I wanted to allow myself some time between college and graduate school to really combat the fatigue and the overwork that four years of college could bring,” Nguyen said. “I wanted to be really fresh and excited going into graduate school.”

Reyes said he plans to travel when not on duty as an EMT or engaged in school or research.

Gap years can alleviate many stresses for undergraduate students by minimizing the workload and slowing down the rushed timeline often associated with pre-health careers. With extra time, students can also strengthen their GPAs and secure strong letters of recommendation, said Tran and Nguyen, respectively.

However, there are some added challenges to consider, such as comparison to others who are directly entering medical school.

“Seeing others advance towards their medical degree while you’re laying back and trying to take a break, … if you have this tendency to have imposter syndrome and comparing yourself to others, it’s not hard to fall into this mindset of comparing yourself to those who got accepted to a graduate school,” Tran said.

Several gap year students also have to deal with feelings of uncertainty.

“It is more uncertain for the future because you’re not sure where you’re going straight out of college, and that can be really scary,” Nguyen said.

Sticking to an individualized pace and avoiding comparison is of utmost importance, Soto said.

“Explore yourself. Learn who you want to be. … Explore new hobbies,” Tran said. “Don’t feel rushed to get this degree that you’re looking for, whether it’s med school, dentistry, pharmacy – anything like that.”

While gap years certainly come with many challenges, the benefits of taking this time off are worth it for many. Education can be a personal affair, and UCLA students are no strangers to this experience.