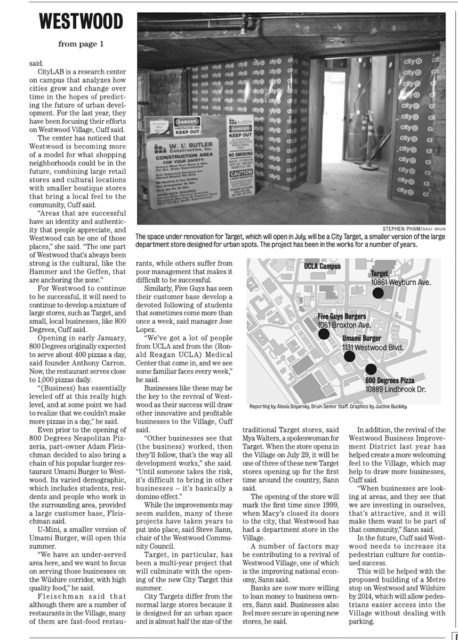 For many Bruins, Westwood Village is an area often frequented as an excursion after class, Friday night outing or quick lunch get-together. However, this general sentiment regarding the liveliness of UCLA’s college town was not always the case.

Ten years ago, Daily Bruin writer Alexia Boyarsky wrote about a Westwood revival among local businesses. The decade-old article mentioned the arrival of various businesses in Westwood, an addition that came after a progressive downturn in business activity since the 1990s.

While factors such as the recession and lack of public parking contributed to Westwood’s waning activity, Boyarsky also said businesses were unable to find traction to stay in Westwood for the long run.

Dana Cuff, director of UCLA’s cityLAB at the time, said in the article that Westwood was ready to enter a new era of business.

“It’s taken a while for Westwood to reestablish its new identity, but really, it is primed for its next blossoming,” Cuff said.

Boyarsky said certain businesses in Westwood Village were exemplifying a hopeful era of growth for the area. Boyarsky wrote about the opening of Five Guys Burgers and Fries and 800 Degree Neapolitan Pizzeria, two restaurants that signaled a hopeful future for Westwood’s urban development.

While the addition of these businesses pointed toward the beginning of a thriving Westwood era, their closing certainly did not signify the end. Five Guys Burgers and Fries and 800 Degree Neapolitan Pizzeria have closed since their 2012 openings, but a plethora of new businesses have taken their place.

2020 introduced new businesses to Westwood, from Meet Fresh to Duffl, a student-created college delivery service. Through such additions, Bruins and other Westwood frequenters are able to experience a continued level of pedestrian culture.

Cuff said in the article that the businesses established at the beginning of Westwood’s revival would be crucial in helping solidify a steady future for Westwood.

“Other businesses see that (the business) worked, then they’ll follow. That’s the way all development works,” Cuff said. “Until someone takes the risk, it’s difficult to bring in other businesses.”

A correction note in Boyarsky’s article also mentioned the construction of a Metro stop on Westwood and Wilshire that would not be added until 2036. Now, only ten years later, the metro stop is well underway with an expected completion date of 2027.

Other sources from the 2012 article, such as Westwood owner Adam Fleischman, said it was difficult for Westwood to grow, as the area mainly served fast food.

Westwood has come a long way since 2012. As a city amid restructuring during the time of Boyarsky’s article, the boom of Westwood’s businesses ever since has certainly lived up to its predictions.

Steve Sann, the chair of the Westwood Community Council in 2012, said in the article that Westwood’s revival would allow for steady growth in the future.

“When businesses are looking at areas, and they see that we are investing in ourselves, that’s attractive, and it will make them want to be part of that community,” Sann said.

Now, a decade later, Sann’s predictions are largely correct. Westwood’s reputation as a bustling college town may not have always been the case, but for now, Bruins can expect it to stay that way.