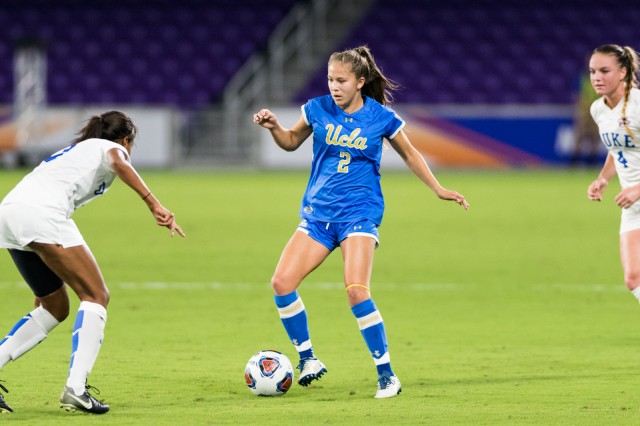 All three players started at least 10 games for the Bruins. Villacorta and Sheehan played in all 25 games and Sanchez participated in 24. Sanchez ranked third on the team in goals scored and logged a UCLA freshman-record 12 assists. Sheehan scored five and had three assists while Villacorta made four assists. The U.S. women’s national team is tied for first with Germany in total titles with three.

The U.S. will begin tournament play Aug. 6 against Japan. The other two opponents in its group are Paraguay and Spain. Mexico kicked off play Aug. 5 against Brazil and claimed a 3-2 victory. Mexico will face England and defending champions North Korea in their remaining group stage games.

The WNBA playoffs are less than a month away – and it’s likely both of the Bruins’ 2018 draftees could see each other in the finals.

UCLA women’s basketball point guard Jordin Canada and forward Monique Billings went fifth and 15th in the WNBA draft in April. Canada, a reserve for the Seattle Storm (21-7), and Billings, a reserve for the Atlanta Dream (18-10), now see both their teams leading their respective conferences.

The Storm and the Dream currently have the two best records in the league.

The two teams played each other three times this season, with the Dream owning the head-to-head 2-1. Seattle, however, was the first team to clinch a playoff berth after an 85-75 victory over the Minnesota Lynx (15-13) – the defending champions – last Friday.

So far this season, Canada is averaging 5.7 points and 3.1 assists per game in 16.2 minutes of action, backing up 10-time All-Star and all-time WNBA assist leader Sue Bird.

Billings is averaging 3.4 points and 2.7 rebounds, but is shooting an efficient 45.9 percent from the field in 10.7 minutes of action.

Both teams have six games left of the regular season to distance themselves from the rest of their conferences. The WNBA playoffs will kick off Aug. 21.

The Cape Cod Baseball League regular season is over, but a handful of Bruins are battling it out in the first round of the playoffs.

The Gatemen won 3-2 after a two-run ninth inning comeback attempt by the Kettleers.

Garcia got the starting nod for Wareham in the series opener after posting a 1.29 ERA and 33 strikeouts. The Western Division All-Star tossed five scoreless innings and recorded eight strikeouts.

Ydens – the Gatemen’s primary leadoff man – hit .304 on the season and led his team with 34 RBI. The outfielder went 3-for-4 with a home run, a double and three RBI in Wareham’s season finale against the Bourne Braves.

Toglia had the lowest batting average of any Bruin in the CCBL with a .209 mark, but the first baseman was still able to hit seven homers.

Rising junior Nick Scheidler – who played for the Chatham Anglers – tossed seven strikeouts in nine innings with a 2.00 ERA.

The Gatemen finished with a 25-17-2 record, while the Kettleers went 22-18-4. Wareham won the season series with Cotuit, going 3-1-2 against the Kettleers.