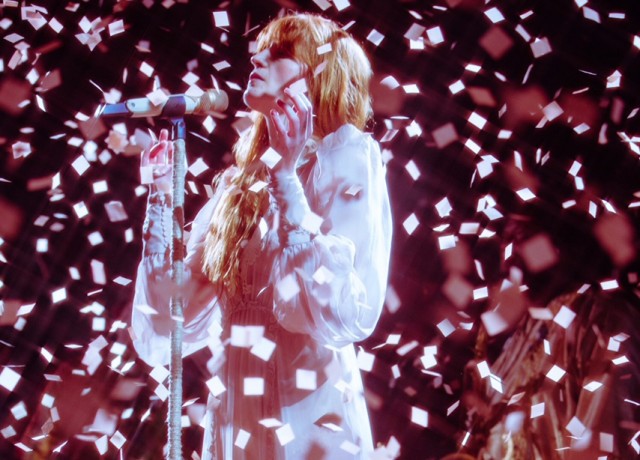 Florence Welch took the stage at the Hollywood Bowl for the first of two Los Angeles Florence and the Machine shows. The indie band played a combination of its older, more energetic songs and their newer, more soulful songs. (Courtesy of Lillie Eiger)

Florence and the Machine

Florence Welch stepped out from between a crucifix and the Hollywood sign for her first of two Los Angeles shows of the “High as Hope” tour.

The tour, titled after Florence and the Machine’s latest album, mainly featured newer songs. The show began with Welch softly singing the opening line, “The show was ending,” from the emotional number “June.” The concert also featured upbeat songs from past albums, such as “Cosmic Love” and “What Kind Of Man.” It was a necessary addition – if she had only included songs from her more recent album, which mainly included slower ballads, the show might have dragged, instead of feeling energetic. Though “High as Hope” signaled a departure from the band’s signature ethereal persona with less over-the-top production, Welch remained as fairylike on stage as she has in the past.

Welch was not afraid to make demands of her audience, though she did include many thanks throughout. She requested audience members hold hands throughout “South London Forever” after discussing the “messy” times from her early teens to late twenties that inspired the song. The audience stood and swayed as she sang “holding hands with someone that I just met” during the song’s intro. A bit awkward for people who chose to follow her instructions, it was in line with her desire to create a sense of community at the event.

During “Dog Days are Over,” Welch paused halfway through the song, the band still playing the beat, and asked everyone to put away their phones and enforce the rule with those around them. She then asked everyone to raise their hands in the air and jump for as long as possible, whether to release feelings of anguish or to send out positive energy. Though the gesture could have come across as cheesy, it was instead heartfelt and genuine, as she spoke throughout the night of the importance of sending love into the world.

When singing, Welch complemented her deep vocals with eccentric dance moves, often twirling for what seemed like an impossible amount of time, leaping across the stage and dropping to the floor. Her movements did not feel choreographed – they were simply her feelings channeled into spontaneous and smooth actions. At one point she raced into the audience, running between the benches and crowd, eventually being lifted back to the stage by the audience. With a flowing, sheer white gown, she had the appearance of an exuberant ghost – fitting for the persona she has spent a decade creating.

Welch began the show’s encore with “How Big, How Blue, How Beautiful,” the titular song from her third album, a song she said was inspired by a disastrous love story that originated at the Hollywood Bowl, creating a full-circle moment. After bringing opener Kamasi Washington and his band to join her for a jazzed-up version of “Big God,” Welch ended the night with “Shake It Out.” She requested the audience to join as her choir, ending the show on a note of togetherness – just as she had begun it.

Ending the concert on an iconic Florence and the Machine song epitomizes her performance; though Welch has changed as a musician, her performance persona remains solidified.

Snyder is currently the Podcast producer and Arts staff. She was previously the 2019-2020 Arts editor as well as the 2018-2019 Theater | Film | Television editor.