By Sam Connon and Gabriel McCarthy 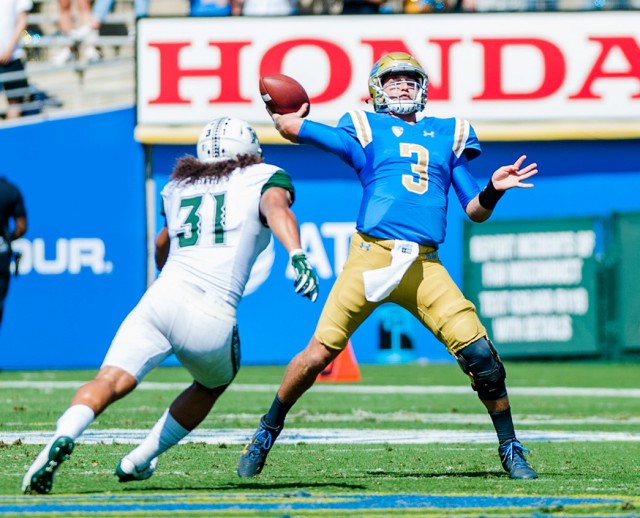 It took three weeks, but Josh Rosen is now a starting quarterback in the NFL.

The No. 10 overall pick in last year’s NFL Draft and former UCLA football starter got his first taste of NFL action last week, but the Arizona Cardinals named him their starting quarterback Monday.

With just over four minutes to play in Arizona’s matchup against the Chicago Bears on Sunday, Rosen came in to replace Sam Bradford with his team down by two.

Rosen threw for 25 yards on his first drive, but coach Steve Wilks elected not to take a timeout when the Cardinals were facing a 4th and 5 at midfield. Rosen was hit as he threw and the Bears picked him off.

The rookie got another chance to complete the comeback, but after scrambling for a 12-yard first down, Rosen was sacked on a Hail Mary attempt as time expired.

The offensive arsenal Rosen will be working with is made up of future Hall of Fame wide reciever Larry Fitzgerald, rookie wide receiver and former Texas A&M Aggie Christian Kirk and Pro Bowl running back David Johnson.

Rosen and No. 1 overall pick Baker Mayfield will be the third and fourth rookie quarterbacks to start a game this season.

The Cardinals will travel to Seattle to play their division rival, the Seahawks, at 1:05 p.m. on Sunday.

UCLA women’s golf claimed its first player of the week award after success in Minnesota.

Sophomore Patty Tavatanakit was named the UCLA/Muscle Milk Student-Athlete of the Week after she shot a 9-under 63 at the ANNIKA Intercollegiate at the Royal Golf Club this past week to come back and win.

UCLA finished second in the team competition behind Alabama, despite Tavatanakit recording seven consecutive birdies from holes 9 to 15 in order to contend. She entered the final round tied for ninth and seven shots off the lead.

The Bruins shot for 26-under 838 as a team, a new school record for a 54-hole event. This is the first UCLA weekly award of the season and Tavatanakit’s third time receiving the honor.

The Bruins will start play again after a busy spring season.

UCLA softball will be participating in Fall Ball to end the year, including four games at Easton Stadium.

The Bruins will begin play on Oct. 14th away at San Diego State, where they will face the San Diego Toreros and the Aztecs. UCLA defeated San Diego in last season 8-3 in its only meeting with the team, where then-senior infielder Kylee Perez led the Bruins with three hits and then-freshman outfielder Julie Rodriguez hit one home run for three RBIs.

UCLA will then play Cal State Fullerton, who they met in the NCAA regionals last season, with split-squad teams in October. Last season the Bruins won all but one game of four against the Titans by scores of 5-3, 3-0 and 6-4.

The home games at Easton begin in November as UCLA will play host to UC Riverside and Loyola Marymount in a doubleheader, before facing Cal Baptist in the only night game of the fall ball season, who the Bruins did not face last season.

UCLA will close out the season against Long Beach State after a road game at CSUN. The Bruins defeated the 49ers 6-5 in the Louisville Slugger Invitational last season and beat the Matadors 8-3.