By Alissa Evans and Eli Countryman 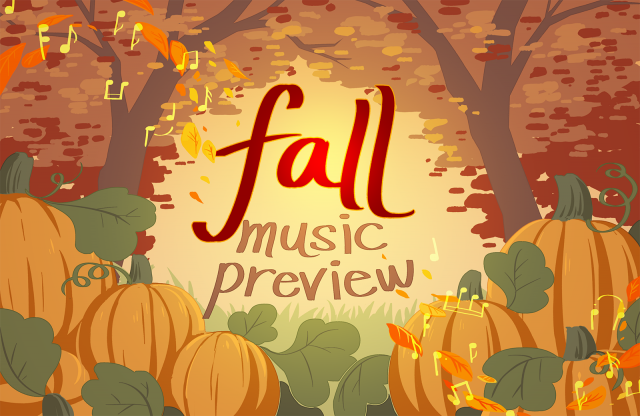 2018 is drawing to a close, but more artists are slated to drop new music throughout the fall. While fans saw summer releases from an array of performers like Nicki Minaj and Florence + The Machine, upcoming albums may mark shifts in the musical careers of many. Read more for some of the Daily Bruin’s top picks for the season!

English rock trio Muse will follow up their 2015 record “Drones” with the band’s eighth studio album “Simulation Theory,” releasing Nov. 9. The album, which credits prominent producers such as Rich Costey and Timbaland, will feature homages to 1980’s pop culture including films like “Tron” and “Teen Wolf,” as well as Michael Jackson’s “Thriller.” Lead singer Matt Bellamy said the digital age allows people to travel to any time period through a kind of virtual simulation, and his desire to go back to the early ‘80s influenced the latest album.

Bellamy said “Simulation Theory” will touch upon virtual reality as a concept, exploring how elements of fantasy are integrated into everyday life. “Pressure,” the album’s latest single released Sept. 27, is a funky, riff-powered number. Accompanied by a “Back to the Future”-inspired music video, it trades the pop influence of previous singles like “Something Human” for a more rock-tinged sound à la “Black Holes and Revelations.” After Muse’s previous few albums catered to a more radio-friendly demographic, a return to the guitar-powered rock that made the band famous is a welcome reversion.

“Trench” by Twenty One Pilots

Musical duo Twenty One Pilots will return from a year-long hiatus on Oct. 5 with their fifth studio album “Trench.” After the chart topping record “Blurryface” launched Josh Dun and Tyler Joseph to stardom in 2015, “Trench” is an opportunity for the band to reestablish itself as a major player in the radio charts.

Singles released in the summer, including the bass-heavy “Jumpsuit” and reggae-infused “Nico And the Niners” teased another collection of sonically diverse tracks from a band that hasn’t been afraid to experiment with a variety of genres. Dun previously said the songs comprising the upcoming album will be slower in tempo than those of the past album, and are more lyrically focused. Fans will have to wait until the release, however, to see if the anticipated shift in sound results in a cohesive album or a haphazard collection of tracks.

“A Brief Inquiry Into Online Relationships” by The 1975

The 1975 is scheduled to release its third studio album following the massive success of its 2016 release “I Like It When You Sleep, For You Are So Beautiful Yet So Unaware of It.” The new album, entitled “A Brief Inquiry Into Online Relationships,” is slated to release Nov. 30. The band recently shared the 15-song tracklist, with three numbers already having been released as singles.

“Sincerity Is Scary” sticks true to the vulnerable nature of the song’s title with more personal lyrics and gives listeners a melancholic trip into lead singer Matt Healy’s mind after a relationship. With about a dozen new songs on the way, The 1975’s new album gives the band a chance to strip back on layers of irony and jokes, similar to “Sincerity Is Scary.” The recent songs from “A Brief Inquiry Into Online Relationships” seems to be a movement toward more lyrically honest numbers that aren’t veiled as heavily in metaphor and irony. The band’s first single from the LP, “Give Yourself a Try,” even referenced Healy’s battle with drugs. The refreshing pace gives listeners a new dynamic from The 1975, but the overall sound has remained true to their style, marking the album as a sure-to-be hit this fall.

The release of 2018 album “Lil Boat 2” didn’t stop Lil Yachty from emerging with another project.

“Nuthin’ 2 Prove” comes at the heels of his previous work, which fell short for critics who believed the lyrics were no more sophisticated than his first album. The upcoming album title perhaps suggests that the rapper won’t be giving fans lyrical transformation, and instead will simply make music without having to prove anything.

The Oct. 19 release date will be one to look out for as Lil Yachty’s experience in the entertainment industry broadens to incorporate acting. With a voice roll in “Teen Titans Go! To the Movies” and an upcoming roll in “How High 2,” Lil Yachty’s entry into the mainstream marks a shift in his career that warrants attention – his music will remain relevant so long as he himself is a relevant character. Regardless of some critics’ opinions, Lil Yachty’s previous works still garner millions of streams from listeners, which means he could either continue down his regular path or spice things up lyrically. Either way, “Nuthin’ 2 Prove” will likely be a hit in the eyes of his fans.

MØ has not released a new album in forever – well, four years.

The Danish singer-songwriter is well-known for her popular collaborations, such as “Lean On,” with Major Lazer and DJ Snake, but she is finally releasing her own studio album Oct. 19.

“Forever Neverland” will come four years after MØ’s first LP, “No Mythologies to Follow.” However, she has kept busy with features, EPs and singles in the gap between the two. “Forever in Neverland” could be the grand culmination of tips and tricks MØ likely picked up on while working with other artists for her array of collaborations. The album’s first single, “Sun in Our Eyes,” is a powerful demonstration of her ability to create cohesive and enjoyable music while working with others. The song came out of teamwork with Diplo, and was formed as an upbeat track that masks gloomy lyrics about potential heartbreak. The intricate qualities of the song create a distinct sound that sets MØ apart from other female artists, with a stand-apart voice and storytelling, and makes the album worth the wait.