By Joy Hong and Gabriel McCarthy 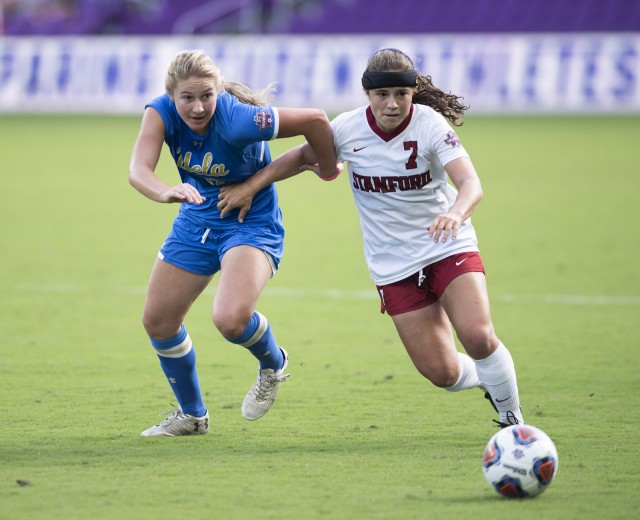 Correction: The original version of this article incorrectly stated that Big Four teams would compete against each other for the first time on Oct. 12. In fact, USC and Stanford will compete Oct. 6.

The Pac-12 has a number of teams at the top of the women’s soccer rankings this season.

The Cardinal have remained undefeated after an impressive weekend where they defeated the Bruins 3-2 before beating the No. 2 USC Trojans 1-0 in overtime. Stanford has extended its undefeated streak to 33 games, with its last loss coming in August 2017.

The Cardinal have recorded 29 goals over the course of the season, with an average of 2.64 goals per game, all the while only allowing their opponents to score seven goals total. Stanford had five players named to the preseason MAC Hermann Trophy watch list, including forward Catarina Macario, who has recorded six goals and four assists in nine games played.

Washington State is also undefeated, with ten wins on the season, though has yet to face USC and Stanford. The Cougars have notably defeated the Bruins – who were then ranked No. 8 – by 1-0, and the Oregon State Beavers (1-10, 0-3) by 2-0 in its most recent home game.

Washington State forward Morgan Weaver has scored six goals in 10 games started, including one against UCLA, after which she was named the Pac-12 Player of the Week for the first time in her career.

The Trojans have won every game but two, losing to the Cardinal and drawing with the No. 10 Florida State Seminoles (9-2-1, 2-2 ACC), who defeated the Bruins 4-1 in September. USC has been undefeated at home and has only ceded four goals total, while scoring 27. Forward Leah Pruitt leads the team with seven goals, although six players on the roster have over five points.

The “Big Four” teams have yet to face one another.

USC blew out No. 5 UC Santa Barbara (12-5) by 16-2 on Sept. 13. The Trojans are allowing just four goals per game, and will have a two-week break to prepare for the MPSF invitational.

The Cardinal have only faced two top-10 teams so far. Stanford escaped a late fourth-quarter run against UC Santa Barbara on Sept. 22 to win 9-7, and defeated then-No. 10 Pepperdine 13-7.

Cal’s lone loss was a 15-14 overtime loss to then-No. 9 Harvard back on Sept. 15. The Golden Bears have also played in close matches against UC Irvine, UC Santa Barbara, UC Davis and Pepperdine, but came out on top.

With the season almost halfway over, competition between the Big Four teams is starting to heat up.