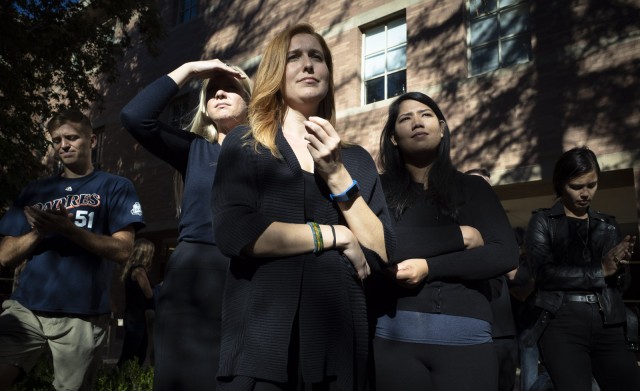 Law students and faculty left their classes early Thursday in protest of the Supreme Court confirmation vote on Brett Kavanaugh and denounced the law school dean's email to them as inappropriate. (Ken Shin/Daily Bruin staff)

UCLA School of Law students and faculty staged a walkout to protest the possible confirmation of Supreme Court nominee Brett Kavanaugh, who has been accused of sexual assault. Students also protested against an email sent by the law school’s dean.

Almost 100 law students and faculty walked out of class onto Shapiro Courtyard on Thursday to protest Kavanaugh, a current judge on the U.S. Court of Appeals for the District of Columbia Circuit.

Last month, Palo Alto University professor Christine Blasey Ford alleged Kavanaugh sexually assaulted her in the early 1980s and testified before the Senate Judiciary Committee as part of his confirmation hearing. Two other women have also accused Kavanaugh of sexual misconduct during his confirmation process.

In the email, Mnookin said she believed Ford’s testimony and opposed Kavanaugh’s confirmation, but also said she questioned the accuracy of traumatic memory recall in general.

“I also think it’s highly likely that her clear and focused memory of the identity of her attackers is accurate,” Mnookin said in her letter. “At the same time, as a scholar who works in part on issues of wrongful convictions, I recognize the possibility that victims can have sincere but erroneous memories, even about traumatic events.”

The National Lawyers Guild at UCLA, a law student organization on campus, planned the walkout and was inspired by similar student protests at Yale University, Kavanaugh’s alma mater, according to the event’s Facebook page.

Maryam Abidi, a National Lawyers Guild board member and law student, said she thinks Mnookin was playing both sides of the aisle in addressing Kavanaugh.

“She brings up the specter of wrongful convictions,” Abidi said. “(Kavanaugh) is not going through criminal proceedings. He will not deal with the collateral consequences of a conviction.”

Protesters dressed in black and discussed the impact of sexual assault on their own lives during an open mic session.

Asheeka Desai, a law student and survivor of sexual assault, said at the open mic she was retraumatized by the process and thinks the justice system fails to adequately handle sexual assault cases.

“I’ve been reminded that from the time someone is violated and they try to seek justice, these institutions will fail us,” Desai said.

Khaled Abou El Fadl, a UCLA law professor, said he ended his class early to attend the walkout. He said he could not continue teaching because of his own experiences adjudicating campus sexual assaults cases. He added he believed the stories of sexual assault from students and Ford.

Hadley Morris, a law student and NLG board member, said she believes Kavanaugh’s accusers are telling the truth.

“It takes a lot of courage to (speak out), whatever your experience is in a situation of assault or violence or where your personal safety or dignity is being taken away from you,” Morris said. “Nobody does that lightly, nobody does that flippantly.”

“Instead of trying to sort out with reason and care the allegations that were raised, Judge Kavanaugh responded in an intemperate, inflammatory and partial manner,” the signatories said in the letter. “We are united, as professors of law and scholars of judicial institutions, in believing that he did not display the impartiality and judicial temperament requisite to sit on the highest court of our land.”

The UCLA branch of the Student Bar Association, along with 43 other branches across the nation, also sent a letter Tuesday to the Senate majority and minority leaders requesting the Senate refrain from voting on Kavanaugh’s confirmation before the FBI is allowed to conduct a more thorough investigation than the one ordered by the Senate.

Luis Vasquez, the UCLA Student Bar Association president and law student, said he signed the letter because he did not think the FBI investigation was thorough enough.

“With us the question isn’t really about whether or not there should be an FBI investigation, but rather we want to make sure that there is a meaningful one,” Vasquez said. “And part of that includes making sure that every possible witness is actually interviewed.”

The FBI completed the investigation into the allegations Wednesday, but has not released the results to the public.

“I hope that in bringing these allegations against (Kavanaugh) into the public eye we make it known that we as a community in the country – and as a legal community – that we’re not okay with this sort of behavior,” Morris said.