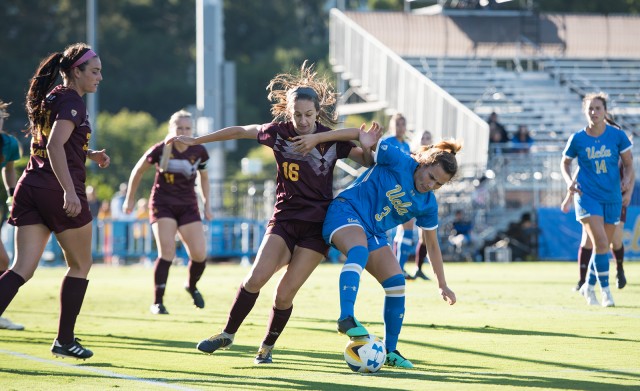 The Bruins defended their home turf but lost one of their leading scorers.

Fans were still on the way to their seat when redshirt junior midfielder Chloe Castaneda drove up the left wing and cut the ball across the middle of the box to freshman midfielder Maricarmen Reyes, who slotted the ball into the corner with just over a minute played.

Castaneda assisted both goals in the first half, shifting to different positions across the front line, sometimes on the left and right wing before returning to midfield. Her four assists this season are tied for second on the team.

“Our game plan was to go out and score early and so I guess I just did whatever I could to do that,” Castaneda said. “So I guess drifting back to midfield was in the game plan.”

“We kept the pressure on, especially in the first half,” Rodriguez said. “We’ve worked a lot on just breaking teams down that sit in, so keeping passing to two touches, keeping our width and using each other to bounce the ball off each other.”

Anika Rodriguez doubled the lead in the 16th minute with a shot from outside of the box on the right side that swerved into the bottom-right corner.

UCLA lost Anika Rodriguez to injury in the 25th minute after she collapsed and clutched her knee. Anika Rodriguez leads the team with five assists and 13 points so far this season.

Coach Amanda Cromwell said the injury was as disheartening as when Anika Rodriguez hurt her knee during her time in her first year.

“When you have any player go down like that it’s heartbreaking because she’s dealt with her fair share of injuries and she’s so dangerous,” Cromwell said. “We just have to see what it is and go from there. My first reaction is I’m just bummed for her.”

Despite maintaining possession in the Sun Devils’ half of the field for most of the first half, the Bruins were caught on the counter. Arizona State’s forward Casey Martinez pounced on a through ball and attempted a chip over redshirt freshman goalkeeper Lauren Brzykcy, who flipped backward and palmed the ball over the crossbar.

Brzykcy and junior goalkeeper Teagan Micah have split time in goal this season, but Cromwell said she does not have a set starter.

“Lauren played great and actually deserved the shutout,” Cromwell said. “They had nasty inswinging corner kicks and she had that one save in the first half. Right now, we are going to start Teagan (Micah) on Sunday but right now there really is no clear-cut starter.”

Sophomore forward Ashley Sanchez added a goal in the 60th minute after cutting inside and powering the ball past the goalkeeper in the bottom left corner.

Cromwell said the Bruins still have work to do on their finishing, despite the end result.

“Getting a goal early is awesome because it meant that they have to come out a bit more than they want to and chase a little bit,” Cromwell said. “Our finishing focus wasn’t good enough and I think at times that we settled for long-range shots when we should have slipped somebody in.”

UCLA squandered chances to pass in the final third for long distance shots, as they finished with 16 total shots and six on goal.

The Bruins were unable to hold the clean sheet as Sun Devil defender Jemma Purfield placed in the ball into the bottom right corner from the left side of the box. UCLA has failed to record a clean sheet in five out of its 11 games.

The Bruins will face Arizona on Sunday at Wallis Annenberg Stadium at 3 p.m.