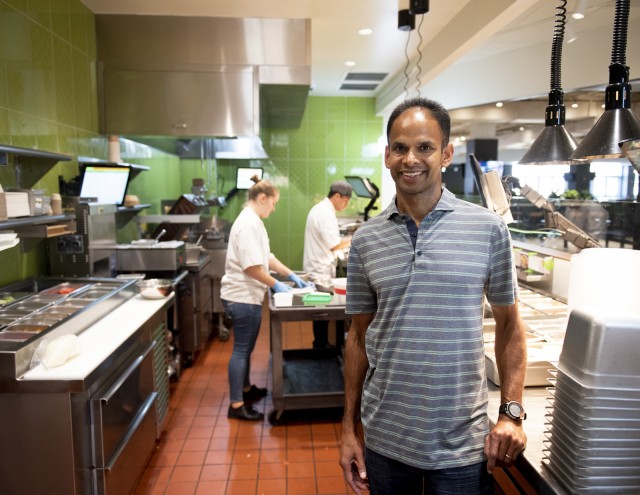 T.K. Pillan was on the hunt for convenient plant-based food when he came up with the idea for Veggie Grill.

The UCLA alumnus co-founded the entirely plant-based restaurant in 2006, when films about unhealthy foods such as “Fast Food Nation” and “Super Size Me” started to grow in popularity, Pillan said. Combined with a statistic from a Merrill Lynch research report that showed 75 percent of consumers weren’t happy with their fast food choices at the time, the films prompted Pillan to realize he wasn’t the only one who desired convenient, healthier options. With two locations near UCLA – one on campus and one in Westwood – Veggie Grill has become an option for students who are looking to eat plant-based amid their busy schedules.

“We’re on a mission really to show as many people as we can how delicious and enjoyable plant-based foods can be,” Pillan said.

As an entirely plant-based restaurant, Veggie Grill commits to creating dishes with no cholesterol, trans fat or animal fat, eliminating the common negative items found in restaurant foods, Pillan said. Research has proven that plant-based diets can reduce the chance of heart disease, cancer and diabetes while enabling one to maintain a healthy body weight, he said. From his personal experience, Pillan said he lost 20 pounds and lowered his cholesterol level from over 200 to under 140 after switching to a vegan diet.

But plant-based ingredients are more expensive and much harder to work with in order to achieve the flavors and textures that replicate meat and dairy favorites, he said. For example, when Veggie Grill first started, Pillan said they had to make their own tempeh by carefully fermenting the soybean and tempeh culture overnight, and then sauteing it enough to bring out the textures and flavors that people would find as appealing as real meat.

Although Veggie Grill provides many whole food options with salads and bowls, the menu does include several comfort food choices as well, such as burgers and fries, but without any cholesterol, animal fats or trans fat, Pillan said. Some of Pillan’s go-to indulgence items include the VG Beyond Burger, which replicates a classic hamburger made from Beyond Meat – a mixture of coconut oil and pea protein totaling 620 calories. The Buffalo Bomber, which is Veggie Grill’s chicken – a combination of veggie proteins and fibers – marinated in their homemade buffalo sauce, totaling 580 calories, is another favorite of his.

“A lot of people, including myself, crave a burger, they crave buffalo wings, they crave fries … and we give you all that in a better form,” Pillan said. “We’re giving you the ability to indulge, but not indulge in a way that gives your body a lot of things that have been proven to be harmful.”

In spring quarter, Veggie Grill launched its first shared dining hall setup in Ackerman Union. One of the biggest changes for the alternative location, Pillan said, was optimizing the kitchen design in order to deliver the breadth of the full restaurant menu in a smaller space and prep area. The new kitchen design was also geared toward increasing the speed of service for students who are in a rush to grab their food and go, he said.

“We did a lot of work … to make sure we could deliver the same food quality and the same experience in a different setting, and also with the ability to deliver the food more quickly given the demands of students,” Pillan said.

Tridib Biswas, a vegetarian fourth-year chemical engineering student, said it’s convenient to use the Veggie Grill app to order his food from home and then pick it up as he’s walking to class.

Despite having a meal plan on campus, fourth-year theater student Vivi Le said she often finds herself eating at the accessible Veggie Grill location in Ackerman Union with her friends.

“I like that it’s vegan. That means I can eat here with people who have dietary restrictions,” Le said. “Eating fries is unhealthy no matter where you eat it, but it makes me feel a little less bad when I eat it at Veggie Grill.”

Courtnie Ly, a vegan fourth-year human biology and society student, said she was limited to grabbing a tofu bowl from Fusion or a salad from Greenhouse before Veggie Grill opened on campus. Now, she prefers to go to Ackerman Union’s Veggie Grill for the large variety of vegan options it offers. Her favorite item on the menu is the Buffalo Mini Wrap.

As the closest university to Veggie Grill’s corporate headquarters in Santa Monica, UCLA was the ideal college campus to keep an eye on and work out the details of the first new dining hall setup, Pillan said. In the future, Veggie Grill hopes to expand to other universities across the country as well, he said, specifically up and down the West Coast, where most of the currently existing Veggie Grill restaurants are located.

“We’re thrilled to be on the UCLA campus. It’s great to see the students embracing healthier, more sustainable eating,” Pillan said. “It really does warm my heart to see … that (people) do care about where their food comes from, … to see the UCLA students helping to lead this movement.”