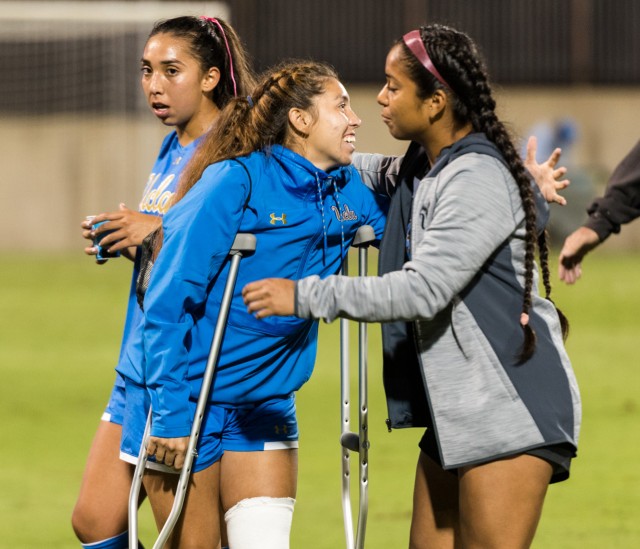 Senior forward Anika Rodriguez injured her knee in the match against Arizona State on Thursday. Rodriguez previously hurt her knee prior to her freshman year and missed the entire season. (Axel Lopez/Assistant Photo editor)

The Bruins have lost their top goal-scorer.

Despite missing Sunday’s game against Arizona (8-4-1, 1-3-1), Rodriguez currently leads the Bruins in both goals and assists.

Sophomore defender Karina Rodriguez has seen her older sister Anika Rodriguez struggle through injury before. Anika Rodriguez did not see action in 2015, as she spent the entirety of her freshman season on the disabled list to nurse a knee injury.

“It’s really tough seeing (Anika Rodriguez) go through another knee injury,” Karina Rodriguez said. “Especially since she had to go through one her first year here, I know it’s going to be tough.”

Anika Rodriguez managed to find the back of the net early in the first half against Arizona State before suffering the injury under 10 minutes later. The goal was the second scored in UCLA’s 3-1 victory and was her fourth goal of the season.

Anika Rodriguez leads the Bruins in scoring with four goals and five assists – good for 13 points.

“(Anika Rodriguez)’s injury is definitely a huge blow for us,” said sophomore midfielder Viviana Villacorta. “All injuries suck. We know we have to look forward and try to win the rest of our games for those injured players.”

UCLA has had to adapt its gameplay due to numerous injuries this season. Junior goalkeeper Teagan Micah returned to the goal as a starter Sunday in UCLA’s match against Arizona after suffering a concussion Sept. 21. After nursing an MCL injury, sophomore midfielder Marley Canales returned to the field when UCLA took on California (5-7-1, 1-4) on Sept. 30. Junior defender Jacey Pederson is currently recovering from surgery but is expected to return to the team soon.

The Bruins have adjusted their game around the losses of senior forward/defender Hailie Mace and junior midfielder Jessie Fleming, who were called to the 2018 CONCACAF Women’s Championship for the United States and Canada, respectively.

“It’s huge to have people be able to come off the bench and play so well that we can’t tell the difference,” said junior defender Kaiya McCullough. “I think the story of this season is overcoming injury and loss. We can take pride in having a really deep team that can do that.”

UCLA will travel to Washington (7-5-1, 2-3) on Friday in search of its fourth conference win, presumably without assistance from Anika Rodriguez.

“She‘s really special and she brings a lot to the team,” Karina Rodriguez said. “It will become all about pulling together and finishing the game for her – playing with each other and doing what we can on the field and getting the win for her.”

Hunt is currently a Sports staff writer on the gymnastics beat. She was previously a reporter on the women's soccer, women's water polo and swim & dive beats.