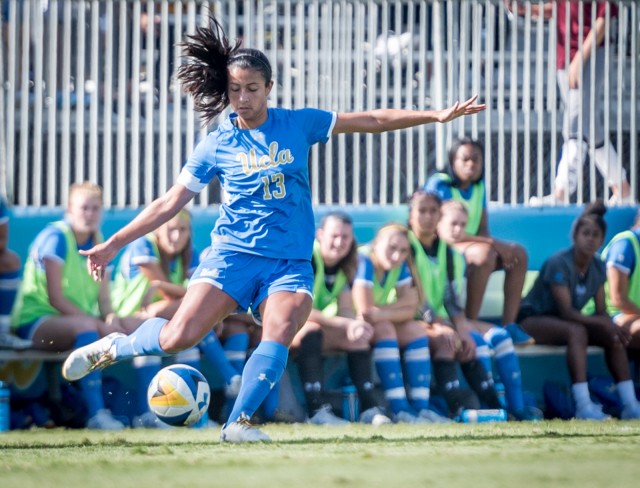 The Bruins don’t rely on just one person to score goals.

One of the new contributors to the Bruins’ goal-scoring is sophomore midfielder Viviana Villacorta.

The Hermann Trophy is a prestigious award given to the best male and female soccer players each year. Previous female winners include Mia Hamm and Kristine Lilly.

Despite playing in all 25 games – including 15 starts – Villacorta didn’t score once in 2017, but has already notched three goals this year.

Cromwell said that Villacorta deserves more recognition for her level of play.

Villacorta said she attributes her goals to a change in mindset.

Where before she used to focus on the pass, Villacorta is now eyeing the net. The midfielder assisted four goals in the 2017 season, in comparison to her two assists this year.

However, she has also become one of the leading team scorers this season.

“A lot of people – everyone, actually – have been telling me to take more shots because in practice, I definitely have the shot,” Villacorta said. “I’m more technical and look for passes, but now I’m more attacking-minded so I can help the team.”

Villacorta isn’t the only contributor to the UCLA offense, though.

The Bruins’ two leading goalscorers are forwards senior Anika Rodriguez and sophomore Ashley Sanchez, who have both tallied four goals this season. In addition to Villacorta, the team has two more players with three goals: midfielders sophomore Delanie Sheehan and freshman Maricarmen Reyes.

UCLA had goals from 12 different players last year by the end of its 25 games, but this year, the Bruins have equaled this feat in about half the number of matches.

Last season, one player had nearly twice as many goals as the next highest-scoring player. Then-junior forward Hailie Mace scored 15 goals.

With Mace missing most games this season due to national team duty, there has been room for a more even goalscoring distribution.

“Having a bench that can come on and bring something and impact the game is so important,” said junior defender Kaiya McCullough.

The Bruins have five games left in the regular season for more players to join the list of goalscorers.