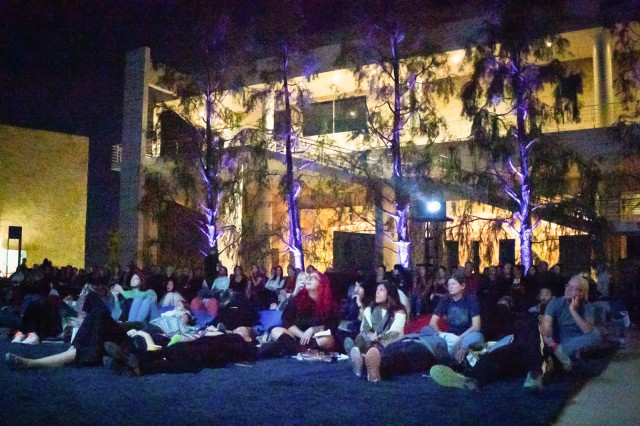 Columnist Nina Young explored the relationship between fashion and film at the Getty Center, which screened the 1978 cult thriller "The Eyes of Laura Mars" alongside a recent exhibition on fashion photography. (Daily Bruin file photo)

Los Angeles’ blend of midnight movies, cult screenings and historic theaters offers late-night scares and childhood nostalgia back in the theater. Join columnist Nina Young as she attends different cult screenings each week to find out why audiences stay out so late after dark.

The 1978 cult thriller “The Eyes of Laura Mars” begins and ends with the same image: a dramatic photo negative of Faye Dunaway’s eyes.

The Getty Center, located just across the 405 from UCLA, recently screened the film to complement their recent exhibition “Icons of Style: a Century of Fashion Photography, 1911-2011.” The screening took place after the museum closed for the night, transforming its courtyard into an outdoor theater. Not only did the movie’s focus on a fashion photographer connect it to the exhibition, but the screening was additionally preceded by fashion video shorts, allowing attendees a holistic look at the industry’s history.

Drawn to the event as an unapologetic fan of 1970s fashion and music, I was excited to observe attendees wearing sequined dresses and jumpsuits. And while the crowd wasn’t overwhelmingly costumed, the bell bottoms and headbands I did see demonstrated the attendees’ passion for the flick’s ’70s aesthetic. Starring Dunaway and Tommy Lee Jones, “The Eyes of Laura Mars” follows the misfortune of a female fashion photographer who sees through the eyes of a killer just moments before they commit murder.

Sarah Cooper, the Getty’s public programs specialist, said guests were encouraged to attend in their best throwback looks to capture the film’s fashionable spirit. They hoped the public program would enhance the impact of “Icons of Style,” providing a new perspective on the fashion sphere while also screening a fun and proto-slasher thriller before Halloween, she said.

“‘Laura Mars’ is actually a film that the (exhibition) curator, Paul Martineau, singled out as an iconic moment for fashion on screen,” Cooper said. “He even included a still from the film in the exhibition catalog, which I didn’t know when I picked this film.”

With Studio 54-era disco music pumping through the courtyard, I regretted not visiting the accompanying exhibit, as the film’s plot quickly raised questions about the ethics of fashion photography and violence in society. These questions were hard to ponder, however, due to the overall mood of the audience around me.

Unofficial cult movie screening rule No. 6: Try to separate the shared audience experience from your real thoughts about the film.

It is no secret that cult screenings invite distracting audience reactions. But when the characters in “The Eyes of Laura Mars” were brutally killed, you might’ve expected those reactions to be screams. Instead, I heard laughter. From murders to melodramatic love sequences, attendees snickered at parts of the film, undercutting its dramatic tension. I’ll admit it was hard not to get caught up in the giddiness of the crowd and mock the exaggerated zoom-ins on Dunaway’s face as she awkwardly ran from her visions. Though based on a script written by acclaimed filmmaker John Carpenter, the film’s campy execution doesn’t help to reveal its deeper themes, which brings me to …

Unofficial cult movie screening rule No. 7: Keep a lookout for threads of social commentary within the film that may explain its significance.

Several cult films, while initially underappreciated, offer commentary that resonates with audiences across decades. During my research for the “The Texas Chain Saw Massacre” screening, I discovered that some love the film due to its commentary on disillusionment in American society during the Vietnam War, demonstrated on-screen through cannibalistic violence. Luckily, the Getty’s showing of “The Eyes of Laura Mars” contextualized the film’s critique of the fashion industry by presenting it alongside an exhibition and fashion clips. As I waited for the Getty’s tram – removed from the crowd’s infectious giggles – I thought more about the film’s intriguing themes, like the danger of one’s unreliable self-image, and was thankful the screening hadn’t let the camp stand on its own.

Cooper said that “The Eyes of Laura Mars” could raise questions about how the fashion industry represents women while acting as both a commercial medium and an art form. Screening the rare short films would help the audience comprehend the general process of fashion photographers, she said, mentioning in particular the screened excerpt from William Klein’s satirical 1966 film, “Who Are You, Polly Maggoo?”

“(In ‘Polly Maggoo’) All the models wear sheet metal dresses that are cutting their arms and look totally insane,” Cooper said. “It’s an interesting phenomenon that someone who was so active in making fashion photography had this side gig of making a spoof about it.”

Attendee Jason E.C. Wright said watching “The Eyes of Laura Mars,” when experienced in tandem with ‘Icons of Style,’ would help generate a dialogue about art across media. While he had never seen the cult film before, Wright said he did visit the exhibit many times due to his love for fashion. He said that the film’s distinct aesthetics would offer the audience an engaging way to think deeply about fashion.

“There’s not that big of a gap between the cinema world and fashion because costume designers … were the ones that drove these characters’ stories,” Wright said. “I think if something creates a cult following, it is because they were able to find an authentic voice … (which) has this really stylized, imaginative way of seeing the world.”