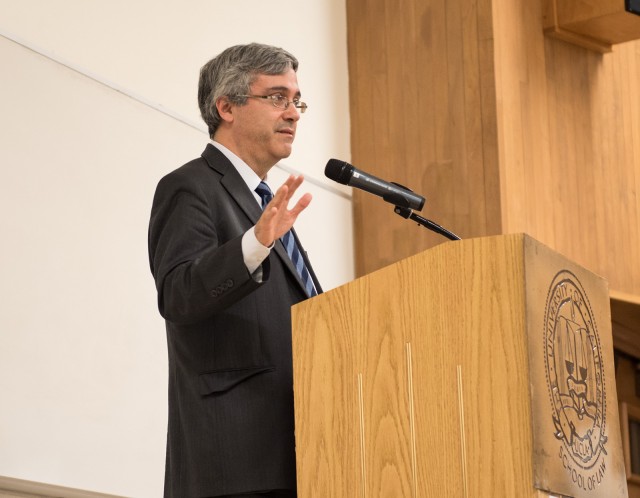 Thomas Saenz, president of the Mexican American Legal Defense and Education Fund, spoke about immigration policies at a forum at the UCLA Law School on Thursday. (Axel Lopex/Assistant Photo editor)

The case, which may appear before the Supreme Court by June 2019, could jeopardize the protections for those who immigrated to the United States illegally as children. DACA, which was enacted by former President Barack Obama in 2012, has helped thousands of undocumented individuals obtain work permits and driver’s licenses in certain states.

Saenz said he is optimistic that the efforts of activists, including attorneys and DACA recipients, can lead to a favorable Supreme Court decision. He said he thinks Chief Justice John Roberts, a conservative, may moderate his views and vote in favor of DACA.

“Who is in charge in the House and Senate will shape how the case appears before the Supreme Court, because the justices are influenced by what is going on in the country,” Saenz said.

Saenz added the Supreme Court is increasingly separating the rights of immigrants from the rights of citizens. This means several rights, including education and reproductive health, may become limited for immigrants in the near future.

Sarahi Flores, a third-year philosophy student who attended the forum, said she supports immigrants in the wake of Associate Justice Brett Kavanaugh’s appointment to the Supreme Court. Flores said she is concerned Kavanaugh will side with Republicans’ decisions, which she said she thinks often fail to protect universal human rights.

“I think, as someone who deeply cares about immigrants’ rights, I want to learn more about the legality of immigration issues and what goes on in the courts,” she said.

Saenz added the greatest victory for DACA recipients is that DACA is still in place today, 13 months after Trump called for its removal, thanks to the activism of attorneys and immigrants.

“That ongoing effort to preserve DACA, and even ultimately to see it expanded into legislative relief for the DACA population, is perhaps the most important work that we face under this administration,” he said.

Abel Valenzuela, a UCLA professor and the director for the Institute for Research on Labor and Employment, opened the forum by providing background information on immigration policy. Valenzuela is also a member of the Advisory Council on Immigration Policy, which he said was founded in March 2017 to provide solutions for immigrants’ concerns.

“There is no other institution of higher learning in the country with a concentration this strong of research programs and activities that engage with immigrant experts and the community,” Valenzuela said.

Saenz said immigrants should understand the rights to which they are entitled. For example, he said immigrants who are in school should have the right to work regardless of their work authorization status because jobs provide certain educational experiences.

“Everyone should access the services to which they are entitled,” he said. “Don’t fall for the fear.”

Saenz said he is concerned about the Trump administration’s anti-Latino policies and rhetoric. He said Trump’s rhetoric has created a fear of Mexican immigrants among America’s nonimmigrant population.

He said this fear allows Trump to use immigrants as scapegoats in any area of policy he wishes to discuss, especially voting. For example, Trump claimed in 2016 he lost the popular vote due to fraudulent voting among immigrants despite lacking any evidence to support this fact, Saenz said.