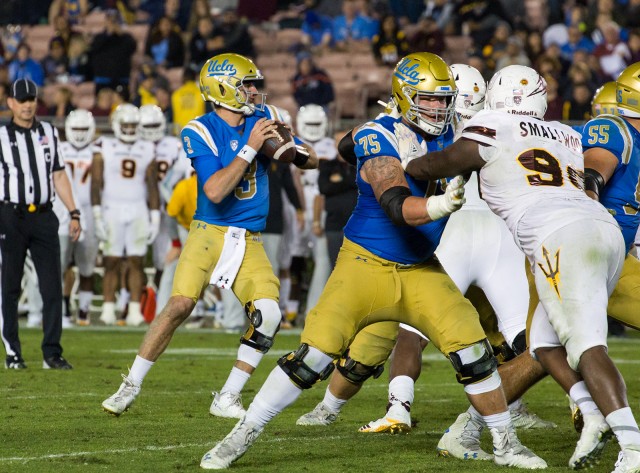 Rosen and the Cardinals trailed 15-3 early in the fourth quarter before the former Bruin signal-caller connected with receiver Larry Fitzgerald for a touchdown, cutting the deficit to five.

After a stop by the Arizona defense with less than three minutes left in the game, Rosen got the ball with a chance to steal the win.

The Cardinals’ offense marched down the field and got inside the 49ers’ 10-yard line with ease, but failed to convert on first and second down. On third down, Rosen found fellow rookie – receiver Christian Kirk – in the back of the end zone for the go-ahead touchdown with just 34 seconds remaining.

San Francisco failed to get into field goal range on the ensuing drive, giving Rosen his second career victory.

Rosen finished the game with 252 yards on 23-of-40 passing, a pair of touchdowns and one interception. He is now 2-3 since becoming the Arizona starter in week four.

Both of Rosen’s wins this season have come against the 49ers.

The Bruins’ 56-game schedule for the upcoming season was released Monday, with the first series coming against St. John’s at home Feb. 15-17.

After not playing in its third true road game until March 29 last season, UCLA will travel to Atlanta to take on Georgia Tech for a three-game series Feb. 22-24.

In the second weekend of March, UCLA and USC will both host the annual Dodgertown Classic. UCLA went 0-2 in last year’s tournament, losing 6-3 to Vanderbilt and 3-2 to USC, while their bout with TCU was rained out.

This year, Michigan and Oklahoma State will travel to Los Angeles to join UCLA and USC.

UCLA will also host East Carolina on April 12 and 13, with a double-header on the second day.

Other out-of-conference opponents for UCLA include Tuesday matchups with LMU, CSUN, Pepperdine, Long Beach State, UC Irvine and Cal Fullerton and a three-game series with Sacramento State to kick off March.

UCLA’s final series of the regular season will be in Eugene, Oregon against the Ducks from May 23-25. The NCAA Tournament Selection Show will take place the following Monday.

The Bruins will host their annual alumni game at noon on Jan. 26.

Former UCLA baseball outfielder Dave Roberts and infielder Chase Utley missed a chance at claiming the World Series this season, as the Los Angeles Dodgers fell in five games to the Boston Red Sox. The Dodgers lost a decisive Game 5 to Boston 8-4 on Sunday.

Roberts has been the manager of the Dodgers since 2016, leading them to two straight World Series appearances in 2017 and 2018. He was named National League Manager of the Year in 2016 and finished as the runner-up for the award in 2017.

As a player with the Bruins, Roberts recorded a .353 batting average, .445 on-base percentage and .468 slugging percentage his senior season, as well as a school-record 45 stolen bases. Roberts would play for 10 seasons in the MLB after being drafted in the 28th round of the amateur draft.

Utley announced in July he would retire from professional baseball after the 2018 season. Utley featured for the Philadelphia Phillies and the Dodgers during his tenure in the MLB, spending a total of 16 seasons in the major leagues.

This season, Utley logged a .213 batting average, one home run and 14 RBIs. He finished seventh in MVP voting after the 2006 season, as he finished with 203 hits, a .309 batting average, 32 home runs and 102 RBIs. Utley has been named an All-Star six times and has received a Silver Slugger award four times. He claimed the World Series with the Phillies in 2008.