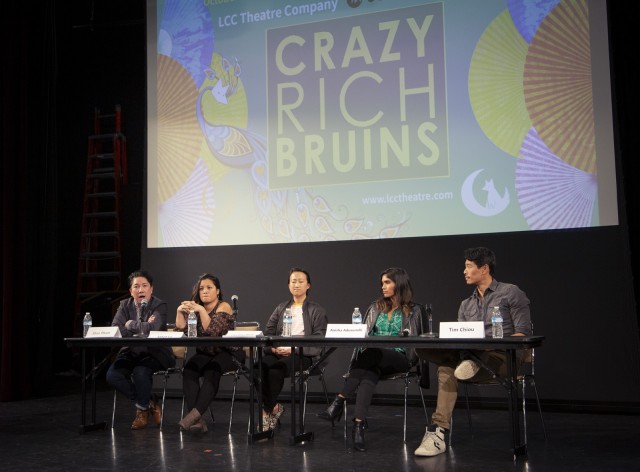 UCLA and LCC Theatre Company alumni took the stage at the Northwest Campus Auditorium to discuss Asian-American representation in the media. With the recent representation, especially the popularity of “Crazy Rich Asians," food stylist and culinary producer Janet Lo said she hopes it becomes more than just a trend. (Amy Dixon/Photo editor)

“Crazy Rich Asians” was the first film with an all-Asian cast and an Asian-American lead in 25 years.

But the film breaking box office records is not necessarily indicative of a sea of change for Asian-American representation, said culinary producer and food stylist Janet Lo – it’s a step toward a larger conversation.

“Nothing has changed, but (the conversation) is louder, and it’s come back,” Lo said. “It’s awesome right now that we’re having a moment, but I hope it’s not just a moment, I hope this is just a fricking revolution.”

Lo was one of five panelists who returned to speak to students. Although the panel is a yearly event that LCC hosts, fifth-year Asian American studies student and LCC producer Arielle Bagood said this year’s panel felt particularly timely because of the recent successes of Asian-American-driven films including “Crazy Rich Asians,” “To All the Boys I’ve Loved Before” and “Searching.”

Fourth-year geography and environmental studies student and LCC producer Vanessa Valenti also felt that it was important to frame the discussion as a continuing conversation, rather than a finite success achieved by “Crazy Rich Asians.”

“Just because we have two rom-coms that have come out, I think there’s a lot more to the story than that,” Valenti said. “And with that success … there’ll be a lot stronger voice and a lot more stories that come out and a lot more people listening.”

“Crazy Rich Asians” did make success feel more attainable for some panelists, including actor and writer Anisha Adusumilli. Because Adusumilli knew some of the actors from the movie, the proximity made her feel an availability of possibility, she said.

“It was just so inspiring, so satisfying to feel all of this emotion and be facilitated by all Asian-Americans,” Adusumilli said. “I keep feeling like the more we see that, the more possibilities we feel for ourselves, which then, in turn, creates collective possibility.”

Despite the positive reception and forward momentum generated by “Crazy Rich Asians,” the panelists also acknowledged the continuing difficulties. Actor Tim Chiou talked about how he is still asked to “speak Asian” or perform martial arts, and people still struggle to name prominent Asian-American actors like John Cho or Steven Yeun, identifying them instead as “the guy from ‘American Pie’” or “the guy from ‘The Walking Dead.’”

Lo talked about how she tries to infuse her culinary work with her Asian heritage and cultural awareness. As a producer for culinary shows, Lo is often in the room for discussions about ingredients to be used on the show and has found herself advocating for more diverse foods to be incorporated.

“I’m always the one like, ‘Hey, let’s use ube, let’s use yuzu, let’s put churros in there!’” Lo said. “And they’re like, ‘Janet, that’s too ethnic. Middle of America doesn’t want to see that,’ and I’m like, ‘How do you know what middle of America wants?’”

Despite hearing about the panelists’ pervasive struggles, many students in the audience said they felt hopeful about the future of representation. First-year biology student Ashley Kim was particularly inspired by Lo’s message of turning frustration into positive action, something she hopes to channel in her own life as a first-year college student.

“These people, all of them, have stood against consistent prejudice and consistent discrimination,” Kim said. “This idea of using your passion and following your heart and doing what you want to do in your life – I think that’s really what I took away.”

Panelist Stan Pham hopes that the possibilities for Asian-American representation continue to expand. Pham, the director of current programs at CBS Corporation, said that as time went on, the idea of a monolithic Asian-American experience would begin to fade, making way for more diverse stories.

“The more that we support each other and support the diversity of stories, you get ‘Crazy Rich Asians’ on one side, you get ‘Better Luck Tomorrow’ on the other side and it’s okay,” Pham said. “We don’t have to be favorable in every light, we can also break bad in our own stories and I think when we get to that place … we can tell that diversity of stories within our own community.”