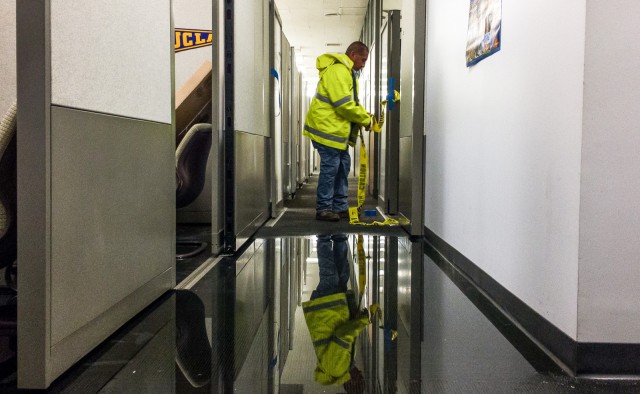 The financial aid office and other campus services were disrupted as a result of flooding inside Murphy Hall. (Jintak Han/Daily Bruin senior staff)

The flood at Murphy Hall started around 8 a.m., according to UCLA Facilities Management.

Some campus services experienced interruptions due to the flooding. The financial aid office temporarily relocated across the hall as plumbers worked to handle the flood. The registrar’s office also experienced a closure, but was fully open by 10 a.m.

Daniel Wefers, a fourth-year mechanical engineering student, was scheduled to meet with a financial aid advisor at 9:30 a.m., but found out about the flood just minutes before the appointment.

“Since it’s not an urgent appointment, I’ll probably come back … on Monday and ask when they plan to have me,” Wefers said.

Financial aid services have temporarily been moved to A128 Murphy Hall while plumbers clear the flood.