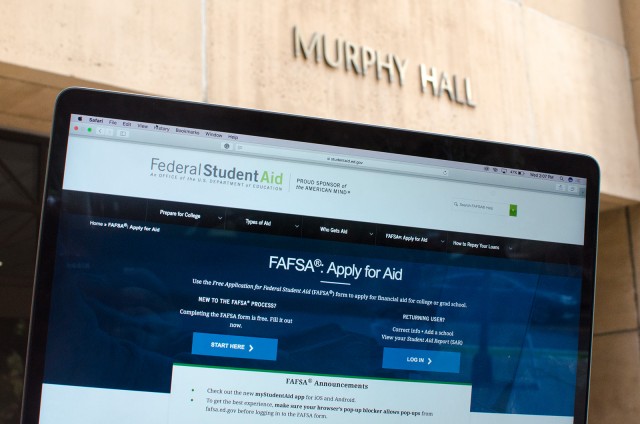 Federal student aid is meant to make college affordable to students of all socioeconomic backgrounds. Instead, it might just be making education even more unaffordable. (Kanishka Mehra/Daily Bruin)

It’s no secret that attending college is more expensive than it’s ever been.

As a public institution, UCLA has tried to be affordable to students regardless of their socio-economic status. While UCLA frequently touts the numbers of how many students receive aid, what it often glosses over is how complex and elusive the financial aid process is. From questions about the Free Application for Federal Student Aid, to concerns about aid options, students often are not getting the full picture of how the system operates.

Misinformation and the complexity of FAFSA may be why as many as 20 percent of students nationwide do not even attempt to fill out financial aid applications. Additionally, Federal Student Aid’s policies governing grant aid and loans – like when the initial aid estimate may change – are not exactly public information. Universities themselves only use summaries of the policy. The official summary – a 1,424-page read – is available via the FSA website. Official notices regarding the policy are posted via the Federal Register, but even then, it’s difficult to find the full text, and it’s impossible to determine what elements may be missing.

It’s not the university’s fault the policy is so inaccessible and confusing. In fact, the problem is not unique to UCLA at all: Most students are unaware of the policy that guides financial aid. And that lack of understanding could have a serious impact. Students’ aid amounts could be altered right before they have to pay tuition; they could be presented limited loan-type options, or the terms of the loan may be so confusing that they end up defaulting once they graduate.

“The university may alter an award as necessary, as indicated by the statement that accompanies each award, noting that it is subject to change,” said Claire Doan, a University of California spokesperson. “Financial aid awards are subject to modification due to a number of factors, including a change in fees, an adjustment to another award, a shift in the availability of funding, or a change in a student’s resources or the the family resources of a student.”

The way the policies are written is so convoluted that Susan Dimotakis, associate director of operations at UCLA’s Financial Aid and Scholarships office, said anyone would need a lawyer to interpret them. Dimotakis recommended students look at the Office of Financial Aid and Scholarships’ websiteto learn the components of their financial aid awards.

But again, that’s just a summary of how the policy works.

This is especially alarming considering 85 percent of undergraduate students nationwide receive some kind of financial aid. Those students all have little knowledge about how their aid works, how the FSA has altered its policies over the years or the impact those changes could have on them. When students receive their initial award, they probably do not even understand the terms of their aid, which may be why so many struggle to repay their loans post-graduation.

The problem starts at the institutional level. Dimotakis’ exchange demonstrates just how little universities and students know about financial aid. If students and administrators do not understand the terms of aid, their rights or how FSA operates, they are at risk of being taken advantage of, which makes college even less affordable.

Last week, for example, the Associated Press found that one of FSA’s federal loan providers, Navient Corp., had been misleading students about their loan options. The company had only been presenting high-interest and high-debt loans to students in order to increase its profits, and misled students into delaying payment on their loans without informing them it would be costlier in the long run. As a result, about 762,000 students who used Navient loans are struggling to repay their debts.

What’s arguably worse is that the Department of Education hid that scandal from the public, even though it knew since 2017. It’s hard to hold people accountable when the public does not even know the specifics of federal student aid.

There are consequences to this general lack of knowledge. Forfeiture, delayed payments and high interest rates are partially why student debt nationwide has reached an all-time high of $1.5 trillion. That staggering number has caused Secretary of Education Betsy DeVos to declare student debt a “crisis in higher education.” Rising debts, confusion about repayment of loans and ambiguous student aid policy may cause fewer students to attend college in the long term.

It may not seem like it’s a big deal that the policy is so elusive. It may seem like students only need to understand the parts that apply to them – like how many units they must be enrolled in to get grants or the conditions of their loans. But time after time, loan companies have profited off vulnerable students who thought they knew enough to accept the conditions of their loans. It’s clear students aren’t to blame here.

Federal reform is necessary. The Navient case has garnered the attention of members of Congress, such as Sen. Elizabeth Warren, who thinks Congress should pass more consumer protection laws and simplify the FSA handbook. Universities need to also push for this reform.

Federal student aid is meant to make college education possible for students regardless of their socio-economic background. But until the policies are simplified, that aid may be hindering the affordability of college, not helping it.

Merz is a staff columnist for the Opinion section.