By Kate Nucci and Melissa Morris 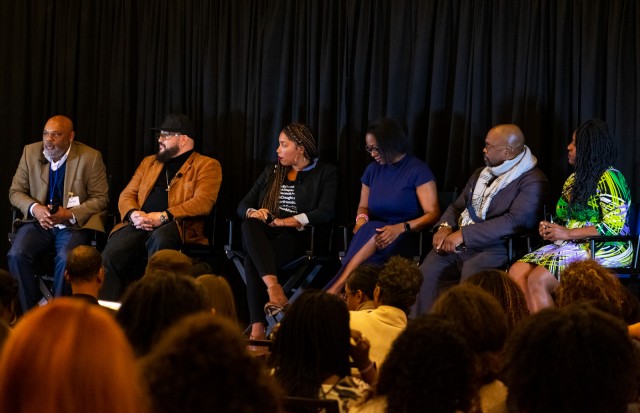 Activist Angela Davis expressed hope for the future of social justice during a summit held at a school that had fired her twice.

“It is young people, who have not had very much experience in this world, who have the hope, and who know they have to do something to change the world because otherwise they know they will not have a future,” she said.

Over 1,000 people attended a social justice summit hosted by the UCLA Black Alumni Association and the Ralph J. Bunche Center for African American Studies. The panels analyzed topics including mental health, music and activism and were led by artists, professors and activists, including Davis and rapper and activist Common.

Tabia Shawel, the assistant director of the Center for African American Studies, said she thought the summit was important because it could help initiate activism and change.

“It provides an opportunity for exchange of knowledge, and to also build resources, and then from there, hopefully, shift policy,” Shawel said.

Davis said she had been reluctant to return to UCLA for many years after she had been fired by former California Gov. Ronald Reagan and the University of California Board of Regents in 1969, and again in 1970 after successfully contesting her first firing in court. She was fired for her affiliations with communism in an era of anti-communism.

Davis compared the Black Lives Matter movement to the 1960s-era Black Panther Party. The Panthers, she said, emerged as a way to police the police.

“(Now) a lot of the activists of Black Lives Matter, you know, we’re not going to talk about the individual police people,” Davis said. “Because we can keep targeting individual police and the apparatus remains exactly the same.”

Nina Turner, president of Our Revolution and a former Ohio state senator, said while she thinks President Donald Trump has created a toxic political climate, blaming him will not solve systemic issues. Our Revolution is a progressive activist group inspired by Vermont Sen. Bernie Sanders.

“We have to be reminded we do repeat history as human beings,” Turner said. “If we don’t remember … how important it is to know from whence we came, as James Baldwin once said, we will never really know the path we need to go.”

Panelists also explored hip-hop’s rise and social justice, touching on questions such as whether white rappers were appropriating an African-American art form.

“These messages of social uplift are connected to shifting policy,” Shawel said. “(They) are really important, not only to sustaining the hip-hop movement, but to making change throughout our entire society.”

Nidirah Stephens, a fourth-year African-American studies and political science student, said she was interested by the idea that artists are the curators of culture.

“(Culture) encompasses music expression and art but also encompasses politics, how we advocate for ourselves, how we change levels of thinking,” Stephens said.

Stephens is also the academic affairs commissioner for the Undergraduate Students Association Council.

Turner said she hoped the summit would empower students.

“It’s important that we ask ourselves, perhaps first, what we enjoy doing,” Davis said. “That we not assume that we’re going to walk in someone else’s footsteps. … You do your work through what do you do best, through what you love, through your talents.”

Sheri Momoh, a third-year molecular, cell and developmental biology student, said she thought the summit was inspiring because it brought together people who had experienced and overcome oppression.

“It’s just really inspiring to see people who have gone through it and are encouraging us to continue, even at our hardest moments, our lowest moments, where it seems like you’re not making any progress,” Momoh said.

The UCLA Black Alumni Association announced it had raised $50,000 for scholarships with the event.

Morris is the 2020-2021 Editor in chief. She was previously the 2019-2020 assistant Enterprise editor as well as the 2018-2019 assistant News editor for the campus politics beat. She is also a fourth-year global studies student at UCLA.