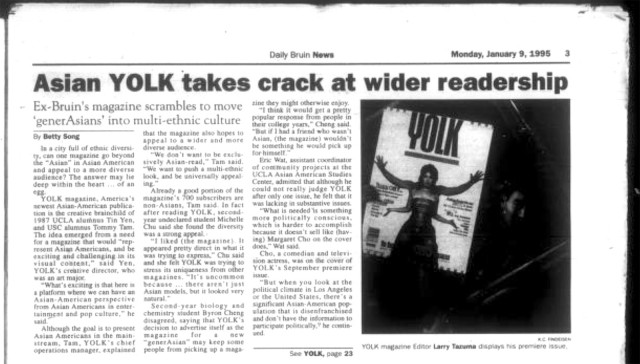 As the first Hollywood film with an all-Asian cast in 25 years, Crazy Rich Asians garnered $238 million at the global box office and snagged a Golden Globe nomination for Best Motion Picture – Comedy or Musical. Actress Sandra Oh became the first Asian woman to receive an Emmy nomination for Lead Actress in a Drama Series for her role in “Killing Eve.” Hasan Minhaj became the first Indian-American to host a weekly comedy show, and beyond Hollywood, Asian-American representation has reached Washington with the most Asian-Americans ever elected to Congress.

Nearly 25 years ago, UCLA alumnus Tin Yen and USC alumnus Tommy Tam founded YOLK magazine to fight that same battle. YOLK magazine was an Asian-American quarterly publication that hoped to “represent Asian Americans and be exciting and challenging in its visual content,” according to Yen, YOLK’s creative director.

In January of 1995, the Daily Bruin published an article expressing YOLK’s desire not only to promote Asian-Americans in the entertainment industry but also to increase readership among a wider and more diverse audience. While their focus remained on the young Asian-American community, the publication strived for a balance between an Asian-American perspective that highlighted their disenfranchisement and a universal appeal that transcends ethnicity.

For then-second-year undeclared student Michelle Chu, YOLK struck a unique balance between promoting Asian-American representation and addressing the diversity among their audience. But, for then-second-year biology and chemistry student Byron Cheng, their focus on Asian-American representation contradicts their desire for universal appeal, shutting out potential readers.

“If I had a friend who wasn’t Asian, (the magazine) wouldn’t be something he would pick up for himself,” Cheng said.

From issues dealing with homelessness to covers starring Asian-American stand-up comedian Margaret Cho, before its collapse in 2004, YOLK became a voice for Asian-Americans silenced in mainstream media. Joining a list of now-defunct Asian-American publications, YOLK never turned a profit. In attempting to display the culture and content that resonates with Asian Americans, it failed to strike a chord with the general public.

However, their sincerity did not go to waste. YOLK’s efforts, combined with a universal push to shine a light on Asian-Americans, helped 2018 become the best year yet for Asian-American representation.

While YOLK magazine did not find success, we have come a long way in both representing and respecting Asian-Americans as worthy of any role or position. UCLA, in particular, has developed a rich Asian-American student community with various clubs and organizations promoting their cultures. From the Vietnamese Student Union to the Association of Chinese Americans, students at UCLA have and will continue to create conversations and shatter stigmas surrounding Asian-Americans.

In a New York Times article titled “Why Do Asian-Americans Remain Largely Unseen in Film and Television?” author Thessaly La Force writes, “representation is about demanding more: more leading Asian-American actors, more films in which we are allowed the everyday banalities of our existence … It’s about showing that you are like us. Not the other way around.” Force encapsulates the key to turning the tide in Hollywood for Asian Americans: we must demand better.

Since the birth of YOLK magazine in 1994, Asian-Americans have been receiving more representation, more awards, and more opportunities to prove their worth on and off screen. Although progress has been made, we must not diminish our drive to display their stories of struggle, joy and culture.