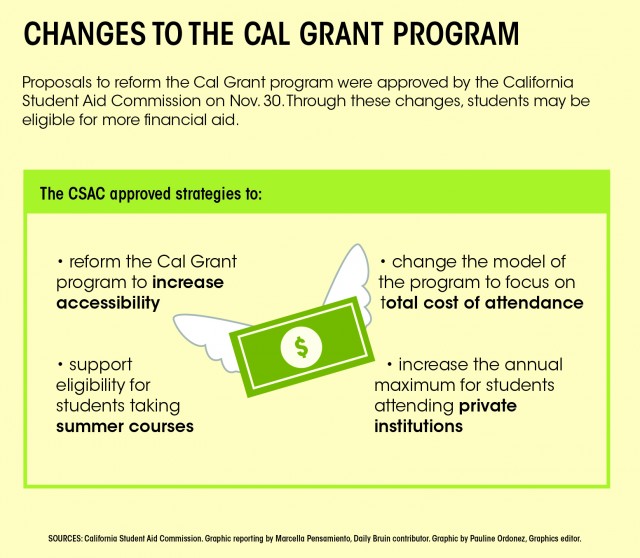 Students may become eligible for more grants through new reforms to a California financial aid program.

The California Student Aid Commission approved a proposal to reform the Cal Grant program Nov. 30. The proposed changes would improve access to the program, support eligibility for students taking summer courses, broaden its definition of total cost of attendance to include more than just tuition, and increase aid for students attending private institutions.

Kimberly Hale, a representative from the UC Office of the President, said in an email statement that the current program has provided beneficial aid to students in the past decades.

Lande Ajose, chair of the California Student Aid Commission, said in a statement the financial aid awards have been slow to adjust to the changing financial needs of the average California student.

The existing program covers basic tuition costs and some additional expenses, such as books and supplies. The proposed reforms would change the program to focus on the overall cost of attending college, which includes tuition, room and board, transportation and medical costs.

The CSAC also approved reforms to expand the program’s eligibility for students enrolled in summer classes. Under the current program, a student who uses the grant for summer coursework may lose eligibility for the grant in future years of college. The commission also voted to use a formula that would increase the grant’s maximum aid to students attending private nonprofit colleges.

Sabrina Isham, a third-year biology student, said she believes the proposals are moving the Cal Grant program in the right direction. She added she thinks the reforms are necessary in order to reduce the debt students accumulate during college.

“People normally come out of college in debt, and they’re spending a huge chunk of their lives paying it off, and that makes it really hard to accumulate wealth,” Isham said.

Isham said she relies on the Cal Grant system for about 50 percent of her tuition.

Alicia Cruz, a third-year international development studies student, said she was not sure whether she would receive financial aid for summer courses last year, which made it difficult for her to plan for the courses.

“Luckily, I got the minimum amount (of aid) which I needed, but I still had to commute (without aid) and I got lucky in terms of not needing to buy textbooks,” she said.

Hale said the UC Student Association sponsored a bill in 2018 to provide additional Cal Grants for summer courses, which the UC hopes will be continued this year.

The CSAC said in a statement the additional eligibility for summer terms could help students graduate on time.

Cruz said the uncertainty of finances impedes her enrollment, housing and transportation decisions, and she cannot start planning for these things until she knows her scholarship amount.

“It would really help us focus more on education, which is what we’re here for,” Cruz said.

While the maximum award increase proposed for students in private institution could increase the aid available to those particular students, public school attendees will not receive the same benefits because the CSAC has not proposed a maximum award increase for public institutions, said Ozan Jaquette, an assistant professor of higher education at the UCLA Graduate School of Education and Information Studies.

Without increasing the maximum amount of aid a public school student can receive, only those who are not already receiving the maximum amount of aid will benefit from the proposed reforms, Jaquette said. If the proposal were enacted, California would not provide aid to any more public school students but instead only provide more aid to students already receiving awards.

“It might not exactly benefit the (public university) students with the most need, but more of the people receiving (awards) in the middle,” Jaquette said.

Jaquette said the reforms could also increase the number of lower-income students admitted to private universities. He added colleges will be less likely to consider students’ finances in acceptance decisions if they do not have to worry about whether they have to provide financial aid.

Increasing the maximum award would level the playing the field for lower-income students, Jaquette said.

“The more generous those programs are, (the more) they increase the purchasing power of poor students,” he said.

The CSAC said in a statement that it looks forward to working with stakeholders, student organizations, the California Legislature and Gov. Gavin Newsom to enact the Cal Grant reforms.