Student channels her self-confidence through burlesque in her new club 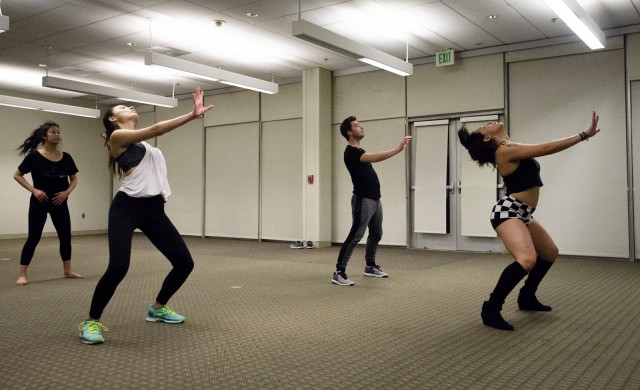 Third-year psychology student Belicia Tang founded the Bruin Burlesque club at the beginning of this quarter, hoping to instill confidence in students through the dance form. The club meets weekly for workshops in the Hedrick Movement Studio, where students of all skill levels are welcome to attend. (Kanishka Mehra/Daily Bruin)

A serious knee injury at the age of 15 took a toll on the third-year psychology student’s self-esteem, forcing her to quit rhythmic gymnastics and turn to other forms of self-expression. Tang, a former Daily Bruin staffer, said she fell in love with the sensuality of Latin ballroom dancing, and the style is much less demanding on her knees. Over the next few years, she said she established her identity as a confident dancer and person.

Tang officially founded the newly formed Bruin Burlesque club on campus at the beginning of this quarter with the driving philosophy of instilling confidence in students through the sensual dance form. The club meets once a week for one- or two-hour dance workshops in the Hedrick Movement Studio, open to students with any experience or skill level. Inspired by JoJo Gomez and other famous femme-style choreographers on YouTube, Tang develops and teaches dance routines to songs by feminine pop artists, including Ariana Grande and Britney Spears. Although the burlesque style can sometimes be associated with strip tease, Tang said strip tease is not a part of her workshops, as she thinks students may feel uncomfortable. Instead, Tang said she hopes to foster self-assurance through burlesque movements.

“There was just something about Latin ballroom, the confidence of these ladies moving in such sexy ways, that really appealed to me and I was like, ‘I want to move like that and I want to look and feel as confident as these women do,’” Tang said. “I used to be really shy but then dance really helped me break out of my shell and that’s what I want to give to these people.”

Several dance organizations on campus are starting to represent femme style, such as Dancesport Club at UCLA, a ballroom dancing club formed in 2017, and some of UCLA’s competitive dance groups, such as NSU Modern. But Bruin Burlesque is the first purely burlesque dance club on campus, Tang said. Burlesque is not a style that many people are exposed to, she said, especially at UCLA where urban dance and hip-hop are part of a long-established culture. Because there are not many dancers in the UCLA community familiar with the style, Tang said she is not able to turn to anyone or invite guest choreographers to help her teach. Instead, every week, she learns femme-style choreography from famous YouTube choreographers such as Yanis Marshall, to teach the Bruin Burlesque members.

Third-year international development studies student Alexandra Tucker has had previous experience with traditional dance styles, but said she decided to join the club to expand her repertoire and experiment with a style of dance new to her. She said the sensual style encourages her to develop a bold stage presence and a stronger connection to the music.

“We’ve only had a few workshops so far but it’s really fun. … It kind of relies more on your ability to interpret the movement more than just technique,” Tucker said. “It’s just for casual fun and there is no pressure, but you definitely get something out of it.”

Tang’s typical two-hour workshop begins with warmup stretches and across-the-floor exercises such as sassy walks or improvisation to music. Then, they work on burlesque technique, including hip isolations and body waves. If there is time toward the end, Tang said she likes to break the students into smaller groups so they have the chance to perform in front of one another. The point of small groups, Tang said, is to get the students out of their comfort zones and to teach them how to let go of any inhibition and perform. During the very first workshop held during week nine of fall quarter, Tang said the students felt uncomfortable showcasing their sassiest walk across the floor. But, by the end, she had them performing in small groups in front of each other.

“They were really nervous about that too, but I just loved it when I saw it on their faces – their relief and their smiles,” Tang said. “I do think they grew a lot in that single workshop because it pushed them out of their comfort zone so much.”

Kendall Kaufmann, a third-year civil engineering student and Tang’s high school friend, said the club has become an important part of improving her mental and physical health this quarter because it is such an enjoyable form of self-expression.

“(The workshops are) a really positive environment. Every time, (Tang) sort of starts it like, ‘Take a deep breath everyone, keep an open mind,’” Kaufmann said. “And that sort of puts you in the right mindset.”

A big part of being confident, Tang said, is expressing self-assurance through body language by learning to become comfortable with feeling uncomfortable. Through her own experience, Tang said becoming a more confident person has opened up many windows of opportunity for her, making it easier to talk to people and better handle nerves, and she hopes burlesque will have the same effects on others.

“Confidence is something that takes a lot of time. It’s a lifelong process, but I think in terms of social confidence, in terms of confidence in your body and in the way you move, those are things that … you can really work on through these workshops,” Tang said. “My goal is to be able to give them that way, that method of becoming confident through dancing.”