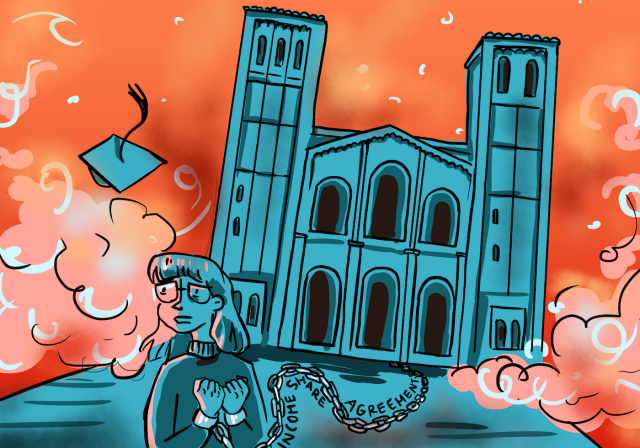 With how expensive college tuition costs can be, students can feel desperate to look for an alternative form of payment. Better hope they don’t settle for some fool’s gold.

The proposal includes University of California, California State University and California Community College students after its success at other institutions like Purdue University and Colorado Mountain College. The agreement begins six months after a student graduates, only kicking in if they are making at least $20,000 annually. The agreement then lasts 10 years, with the exact amount paid depending on the student’s income. If this bill passes, CSUs and UCs would have to start pilot schools on campus and make income share agreements available to students enrolled in the pilot school.

Voepel’s bill aims to end student loan debt, but the benefits of income share agreements hardly differ from those of paying back loans in the future. Both methods are based upon the same premise: Once a student starts making money, a portion of that income immediately goes toward paying off debts.

In effect, it’s the same poison package with a different bow on top.

James Snyder, a first-year physics student, said he was concerned how much money would be taken at the end of the agreement.

“If I had to pay back more with the agreement over time rather than paying the regular cost of the tuition fees, then I would definitely not opt to do it,” Snyder said.

Given a whopping 44 million Americans are currently paying off student debts, it’s admirable that legislators are looking for solutions to the ever-growing issue of loan repayment. But the terms for income share agreements leave students on a hook that can prove more detrimental later in life than loans would, because students won’t know how much money will be taken from them until the agreement ends.

Adam Boman, a staffer in Voepel’s assembly office, said income share agreements don’t accrue interest, and payments are put on hold when a participant is between jobs or isn’t making at least $20,000 per year.

The bill is being championed as the solution to compounding student debt, but it doesn’t solve any of the underlying issues that come with paying for school. According to a legislative analysis from California’s Assembly Higher Education Committee, students would be paying back more over time than they borrow because they’re giving a percentage of their income to their colleges.

“People aren’t going to have the incentive to work harder or work overtime because more of their money will be deducted because of the set percentages of the agreement,” Ho said.

The bill also is unclear about common situations such as a student who wants to switch their originally declared major, or needs to take time off from school. It’s unclear if these situations would be considered violations of the agreement. The proposal brings with it more questions than solutions, and the apparent confusion over the terms of the agreement doesn’t inspire much confidence for one to participate in it.

Kimberly Hale, a spokesperson for the UC Office of the President, said the University appreciates Voepel’s interest in tuition costs, but would not comment on the proposal, since it is currently under review.

Of course, income share agreements might seem easier to deal with because of the lack of accrued interest and the flexibility with payments while one is between jobs. But the agreement’s lack of clarity regarding how much a participant would pay once all is said and done weakens any inclination they might have to opt in to this program. It is also unclear if the percentage taken from a participant’s income can fluctuate throughout the duration of the agreement, complicating an already obscure proposal.

College students’ hearts already are tired and fragile enough. It’s time to stop dangling utopian promises of reduced debt in front of them.

Panaligan is the Opinion editor for the Daily Bruin and hails from Carson, California. He was previously an Opinion columnist in 2018-19 and an assistant Opinion editor in 2019-20 and wrote about higher education and student life issues. He also contributes to the Arts and Entertainment section and has a fervent love for the Los Angeles-based sister band Haim.