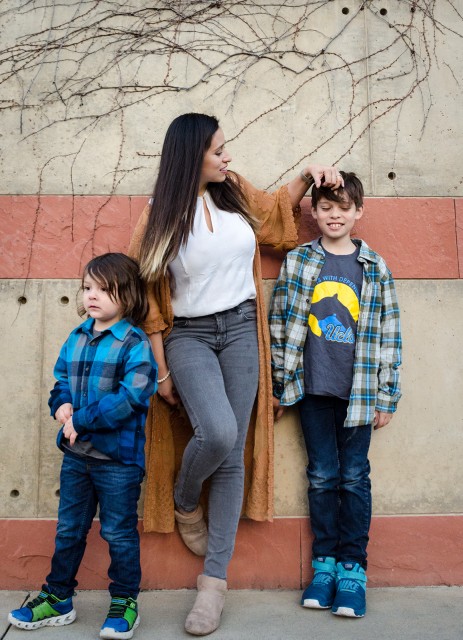 Jenneffer Vazquez Moran, a fourth-year human biology and society student and mother of two, said it is not always easy to find resources for students with dependents on campus. (Kanishka Mehra/Daily Bruin)

Kristen Payne had a 5-year-old daughter when she started school at UCLA. She said taking care of her daughter doubled her workload as a student.

“You go through this routine of getting yourself ready, then getting them ready, making sure that everybody has everything they need,” Payne said. “It was like double everything.”

Payne, who graduated in 2016, was one of UCLA’s many students with dependents. While campus resources are available for these parenting students, many of them said they think these resources are not always accessible and that they still struggle with the financial and logistical challenges of being both parents and full-time students.

Payne said although she appreciates the resources available on campus, she found them more expensive than social services off campus.

Payne said she was able to sign up for the social services she needed as a full-time student with the support of UCLA’s students with dependents office.

Chelsea Krob, a fourth-year art student, said she received some support from the student with dependents office last year but found some programs could not accommodate her 3-year-old child.

“It’s just not helping me because my child is too young, she can’t do the after-school program in (the John Wooden Center) because she’s not potty trained,” Krob said. “It’s a good first step, but it’s not making it significantly easier.”

“We couldn’t buy any gifts for our child so we got a $40 gift card for her through them,” she said.

Krob added she has also received support from the Community Programs Office.

“The CPO and their Christmas and Thanksgiving boxes are what literally fed us during the holidays,” Krob said. “I am eternally grateful to them.”

Jenneffer Vazquez Moran, a fourth-year human biology and society student, said it is not always easy to find resources for students with dependents on campus.

“When I first got here, my son had to live with my mom for the first six months because I couldn’t get him into a daycare that I could afford,” Vazquez Moran said.

However, she is now able to send her 3-year-old son to a UCLA Early Care and Education Center with financial assistance from UCLA.

Vazquez Moran added she has also learned to take advantage of the CPO Food Closet to provide snacks for her two children.

Students with dependents are also able to receive family housing through UCLA. However, students said they have often experienced issues with housing placements and requirements.

Vazquez Moran said she applied for university housing, but UCLA gave her housing that was more expensive than anticipated. She said she was able to afford housing without having to work because she received financial support from her partner, but said she would not have been able to if she were a single parent.

“There’s just so many things that you have to keep spinning, and it’s just really hard,” Krob said.

Krob said she has to drop off her child at preschool at 8:30 a.m. every day and cannot arrive to campus before 9:30 a.m. As a result, she is unable to take morning classes that start at 8 a.m.

Payne, whose daughter has special needs, said that having a child with special needs requires her to spend more time taking her child to health care appointments.

“When your child needs to see a specialist, you have one opportunity at the appointment that they give you or you wait for another in suspense,” Payne said. “It made it a lot harder.”

Krob said her scheduling conflicts and financial concerns worsened when her child fell sick and was unable to go to school.

“(My child) was sick from week four to week six, right during midterms,” Krob said. “My partner had just gotten rehired at a different firm and we didn’t have insurance, so we were juggling our child being uninsured.”

Krob said that although she tried to take her child to classes with her, doing so prevented her from paying attention in class.

“I was just focusing on trying to keep her quiet and I actually had to drop a class during my midterms because I couldn’t be in class,” she said.

Krob said although some of her professors have been understanding, others have been markedly less so. She added she couldn’t take her sick child into art classrooms because they contained dangerous tools and chemicals.

Krob said she wants to be more engaged with extracurricular activities on campus, but feels she does not have enough time due to her parenting responsibilities.

“Just assume that whatever your schedule is as a normal student, half it,” Krob said. “Half of your sleeping, half of your eating, it is all dedicated to something else.”

Krob said she thinks ultimately, students with dependents need to do what’s best for themselves and their families.

“If you need to take more time, demand more time because if we’re not asking for it, we’re not going to get it,” Krob said.

Payne, whose daughter is turning 10 this year, went straight to graduate school after completing her degree at UCLA and will receive her master’s degree in counseling in May from California State University, Long Beach.

She said her experience as a parenting student at UCLA has taught her how to persist through hard times.

“It remains busy, and full, but UCLA helps build toughness and resilience. Even though things could be really complicated being a parenting student, it makes you strong,” Payne said. “We persevered, we did it.”