Battle of the Editors: The future looks bright for bringing home national titles 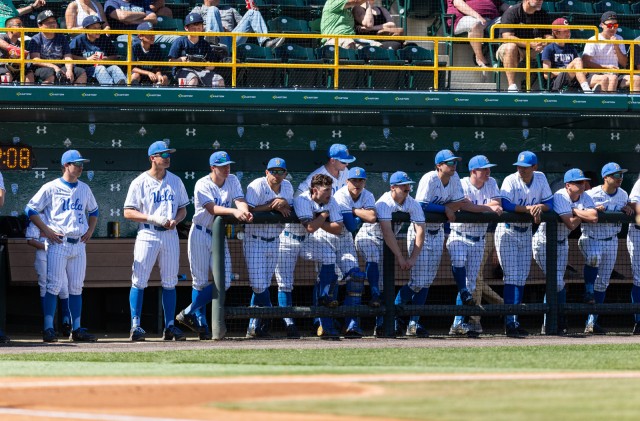 UCLA fans have been deprived of a national title for almost a year now, stuck at the 116 mark while rival Stanford continues to pull away. This spring, however, the Bruins have a few opportunities to get back on track, and the Daily Bruin Sports editors fought it out over which team has the best chance at coming out on top.

The Bruins are primed for another national title.

Coming off last season’s NCAA championship, No. 2 UCLA gymnastics (9-1, 7-0 Pac-12) is heading into the 2019 postseason in a better position than last year.

UCLA has earned 15 perfect scores this season – more than half of all the 10s given out this year – with nine coming from junior Kyla Ross alone. Ross completed the “gym slam” Saturday against Utah State, having notched a 10 at least once on every event.

Senior Katelyn Ohashi went viral on floor exercise last year – but it’s nothing compared to what she’s done this season. Ohashi’s 2019 routine is the most-watched sports video on social media so far this year, garnering over 117 million views. The senior has notched five 10s on floor this season.

To top it off, coach Valorie Kondos Field is leading the Bruins in the postseason for the last time – and she’ll want to go out on top.

There’s no better time than now for a back-to-back championship.

The road to Omaha is paved with good pitching.

And the Bruins have just that.

No. 2 UCLA baseball (14-4, 2-1 Pac-12) made a solid case for the top spot in the country with a series win over defending champion No. 3 Oregon State. The Bruins only have one NCAA championship to their name, but they haven’t been back to the College World Series since they won it all in 2013.

Last year, UCLA ranked inside the top 10 in ERA and had a lineup boasting multiple All-Americans and future MLB Draft picks. But the pitching staff was top-heavy, and after then-senior Jake Bird left the team, they couldn’t keep pace in the Minneapolis Regional.

Redshirt junior right-hander Jack Ralston – who had a 6.44 ERA and 1-4 record in 2018 – got the start in the Bruins’ elimination game in regionals last year, allowing four runs in 1 1/3 innings. This year, Ralston owns a 1.86 ERA and a perfect 3-0 record as the Bruins’ Saturday starter.

The pitching staff ranked No. 2 in the country in ERA before the Oregon State series, but the Bruin batters have even more hype.

The Bruins are star-studded and are about to be recognized as the nation’s most dangerous threat. After falling short for the greater part of the last five years, this is the year that UCLA will get back on top in Omaha, Nebraska.

The Bruins are going to go undefeated this season and bring home the natty again.

No. 1 UCLA beach volleyball (15-0) graduated just one senior from its lineup last season after bringing home the program’s first ever national title.

UCLA opened up the season without dropping a dual point until its fifth dual against then-No. 3 Pepperdine. The Bruins have also swept four top-five teams and have just one 3-2 win against No. 2 USC.

The new talent forced two members of last season’s championship lineup to now compete on the exhibition court. That’s how deep UCLA’s roster is this year.

The Bruins – who fell to Florida State in the NCAA championship last year before coming back from the contender’s bracket – defeated the Seminoles 4-1 on March 10.

With future Olympians in seniors Megan McNamara, Nicole McNamara and Sarah Sponcil, UCLA will have a handful of veterans leading the way to back-to-back NCAA championships.

The Bruins have been – and will continue to be – great this season.

No. 1 UCLA softball (25-1, 3-0 Pac-12) has its best chance to claim an NCAA championship since its last title in 2010. After suffering two losses to eventual champion Florida State in the 2018 Women’s College World Series, this year’s Bruins are battle-tested and ready for another run at the crown.

UCLA is currently on a nine-game winning streak and has lost just one game this year to No. 25 Michigan.

The Bruins most recently posted three wins over No. 5 Washington this weekend and have continued to thwart ranked opponents home and away. UCLA has held its opponents to a .156 batting average and 94 hits in comparison to its .347 average and 251 hits, respectively.

The Bruins are composed of a number of individual standouts who can contribute immediately to team success, including redshirt junior pitcher Rachel Garcia among others.

Garcia’s 2018 season concluded with her being given the Honda Sport Award, the collegiate game’s highest honor. This season Garcia has 128 strikeouts and a 0.54 ERA through 14 games, notably all wins. At the plate, Garcia has logged a .333 batting average, 26 RBIs and 26 hits.

The Bruins also have had production from the rest of the squad, including junior utility Bubba Nickles and freshman utility Kelli Godin leading UCLA with eight home runs and a .500 batting average, respectively.

The fate of games come May and June will depend on success in big moments, but UCLA has the consistency from this season as well as the individual firepower to emerge victorious.

Forburger is the 2019-2020 editor in chief. She was previously an assistant Sports editor for the women's volleyball, gymnastics, softball, swim and dive and rowing beats and was a Sports reporter before that.