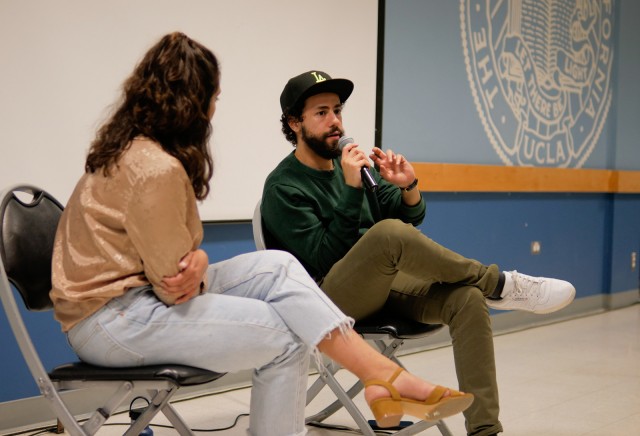 Flooded bathrooms at mosques are something Muslim actor, comedian and writer Ramy Youssef is all too familiar with.

This is often a byproduct of wudhu, an Islamic ritual where individuals wash themselves before prayer. Using personal experiences, such as dealing with messy washrooms during prayer times, Youssef created stand-up comedy routines that eventually inspired his upcoming television show, “Ramy” which he created with A24 and Hulu. The series is based on his life as an Egyptian-American Muslim and will premiere April 19 on Hulu.

In collaboration with A24, Bruin Film Society and the Cultural Affairs Commission hosted a screening of the first three episodes followed by a Q&A with Youssef on Tuesday. BFS events coordinator Kevin Yang, a fourth-year political science and economics student, said the purpose of screening “Ramy” was to highlight relatable representation. The show presents topics that can be difficult to discuss in Muslim communities, such as the diaspora involved in being a part of two conflicting cultures, Yang said.

“There’s an interplay and conflict between two sides and the search of trying to figure out your identity, while wanting to stay true to your parents and your culture,” he said. “And also knowing that you’re born in the U.S. and you have a different upbringing.”

Throughout the three episodes, “Ramy” explores situations relevant to Arab Muslims and American Muslims, but can also be relatable to individuals from other backgrounds, Yang said. Ramy straddles his Egyptian and Palestinian traditions with his American upbringing. Though he has premarital sex –which can be considered taboo in Islam – he doesn’t drink or do drugs, and he also performs his daily prayers. During the Q&A portion, Youssef said he had seen previous narratives about religion where the main character seemed to completely reject their cultural upbringing – something that did not reflect his experience with Islam.

“I felt like a lot of stories I saw about first-generation kids, or about anyone who comes from a strong cultural or faith background, was them fighting their parents and telling their parents, ‘I don’t want to be this. … I want to be white. I want to be like everyone else,” he said. “And that didn’t really resonate with my life.”

However, Youssef said the intent of his show is not to represent all Muslims. Since there are multiple differing Muslim populations – including black, Arab and South Asian segments – he doesn’t consider there to be one, solidified community. Due to such diversity within the faith, he said it is hard to pin down a universal perspective.

Youssef also spoke about the pressure he sometimes feels as a Muslim artist having to focus his work on his religion. Ultimately, however, he said he’d rather write these stories himself than see them handled by people outside of the faith.

Specific storylines in “Ramy” do rely on an insider’s viewpoint, he said, as they focused on issues within Muslim and Arab communities. In the second episode, Ramy’s Palestinian uncle, a diamond jeweler, is depicted as an anti-Semitic misogynist who also makes homophobic remarks. Though this role could have easily become another Arab caricature, the dynamic between Ramy and his uncle speaks to the contrast of opinions between different generations within the Muslim community, as Youssef said he used his real-life experiences as an Egyptian-American to inform the show.

In response to an audience member citing the poor representation of Muslim women in previous films and shows with Muslim leads including “The Big Sick” and “Master of None,” Youssef said he also wanted to create complex and nuanced characters that went beyond stereotypes.

UCLA extension student Magen Jennings, who attended the event, said she especially appreciated the way Ramy’s sister, Dena, was depicted, particularly in one scene where she is admonished for her clothing. Jennings said Dena provided her with a better understanding of what it is like to be a Muslim woman but was also relatable to her own life as well.

“The simple act of her wearing shorts and people making comments about it, … as a woman, there are people that will comment when you wear shorts. (The scene) felt so universal no matter what your background is,” Jennings said.

Along with providing Dena with agency – she doesn’t allow her parents or uncle to talk down to her – the first episode also includes an Egyptian Muslim woman who, rather than allow others to see her as innocent or oppressed, takes pleasure in her sexuality. When hiring writers for his show, Youssef said he included Muslim women – such as co-writer Minhal Baig – to ensure the characters felt authentic.

Although many attendees spoke highly of the series and its progressive values, some students also expressed discomfort with a few of the sex scenes. Youssef said this reaction was something he expected and also intended for viewers to have.

As the night came to a close, the final question focused on whether Youssef had any backlash in the industry when creating a series that focused on a Muslim family. He said the show actually had offers from multiple platforms since there are so many streaming apps that producers need new content for. The industry is also currently invested in telling new, authentic stories from marginalized communities, he said.

“Hollywood is at a spot where they’re trying to be on the right side and get ahead of things … because people care and want to humanize people who are being dehumanized,” Youssef said. “This is a story that people were excited to tell and it’s an exciting time for (narratives) that haven’t been told.”