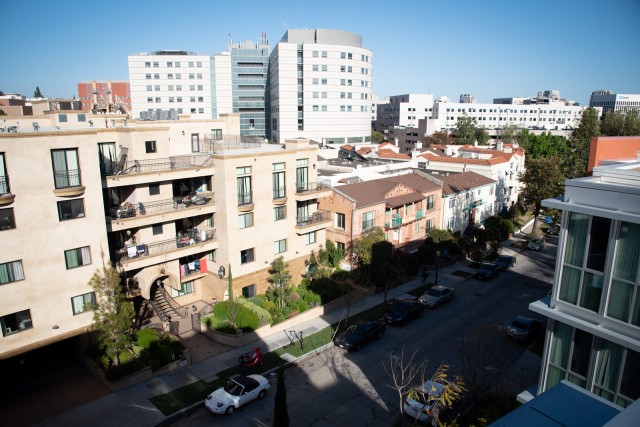 Westwood, like many Los Angeles communities, suffers from lack of housing and sky-high rent. State Senate Bill 50 would address this by incentivizing the development of more high-density housing near job-rich and transit-driven neighborhoods. While homeowners and the city council have opposed the bill, it should be passed. (Daniel Leibowitz/Daily Bruin staff)

Westwood is a tale of two cities: The west side boasts a picturesque campus with rolling hills and glowing bricks, all of which create a place for the world’s sharpest minds to flourish. The east side, on the other hand, has little more than ramshackle, unmanaged apartments and pricey “luxury residences” well out of the price range of most college students.

Westwood’s exorbitant rents, which average an extortionate $3,416 per month, can be attributed largely to the neighborhood’s lack of apartment-style housing. Much of the neighboring residential areas consist of single-family homes instead of buildings that can house multiple residences. While this might make for prettier neighborhoods, it creates an ugly housing process for students living off-campus.

The embattled bill, which will be heard by the state Senate on April 24, would require towns to allow apartment construction within a half-mile of a rail transit station, within a quarter mile of a high-frequency bus stop or within a so-called “job-rich” neighborhood. It’s a reformulated version of last year’s SB 827 and now protects against prior expressed fears, such as gentrification.

Westwood is a neighborhood that meets the bill’s proposed requirements – meaning the housing floodgates in this expensive college town would finally open if the legislation passes.

Westwood’s housing crisis derives largely from the city’s lack of options. Because housing is a renter’s market, landlords and property owners in the status quo are able to escalate costs for students on the hunt for a place to live. SB 50 would create more apartment buildings in high-density areas, which for Westwood, would create competition that would drive rents down to affordable rates.

Paavo Monkkonen, an assistant professor of urban planning, said an increase in apartment buildings could drive apartment pricing down.

“Given that there’s already a ton of demand for housing near campus and the prices for the old stock are quite high, if there was competition for new stock then the prices of the old stock might come down,” Monkkonen said.

The opposite scenario is taking place right now: The lack of housing allows property owners to take advantage of students by skyrocketing rents because students don’t have other options they can turn to.

Courtney Kim, a third-year political science student, said she lived on the Hill her first year and opted to live in a Greek-affiliated house for her second, primarily because she couldn’t figure out the ins and outs of the off-campus housing process.

“I’ve never felt like I can choose where I want to live – I more just had to go wherever was available,” Kim said.

Living in Los Angeles’ star-filled neighborhoods requires a millionaire’s budget, but that’s slowly becoming a reality for all the city’s communities.

“I feel like it’s not affordable for most students to live in Westwood or live close to campus,” Riani said. “There are students that are homeless or, you know, struggling to meet all of their needs, especially given the cost of housing.”

And attempts at affordable housing have seen immense opposition.

Take The Agora, for example, a proposed a 16-story apartment for students on Hilgard Avenue. The Westwood Neighborhood Council voted in opposition to the project, and the homes of the Little Holmby neighborhood have scattered their lawns with “Save Hilgard” signs contesting the housing development.

This kind of opposition is characteristic of city governments too.

The reason, as most SB 50 critics argue, is that it would take away governing autonomy from the cities to determine how best to handle their housing woes. Zev Yaroslavsky, a former LA City Council member, said the bill’s one-size-fits-all approach will not create affordable housing, and community-specific action would be more effective than a state approach.

“This bill goes way too far; it’s an overly simplistic piece of legislation that will not get the job done,” Yaroslavsky said. “We need to use fewer sledgehammers and more scalpels to get this right.”

While Yaroslavsky’s logic makes sense in theory, the reality is that city-specific efforts have been made in the opposite direction. Rather than creating more affordable housing, LA has instead restricted the areas in which multiple-family housing can be built. A city-centered approach doesn’t help solve the problem students are facing and ignores the urgency of the need for affordable housing.

Moreover, the very problem of the lack of affordable housing has been created in large part by the city government’s actions over the past 40 years to reduce the production of apartments, Monkkonen said. This bill, he said, serves as California’s response.

“I think what a lot of cities are mad about is that the power to control land use and to permit (or block) development is a power that city governments have,” Monkkonen said. “No city government wants to give away its power to the state.”

Yet a bill like SB 50 is exactly what Bruins need. And now is the perfect chance for Westwood, LA and California to give students the east side they deserve – and can afford.

Weinerth is an Opinion columnist.