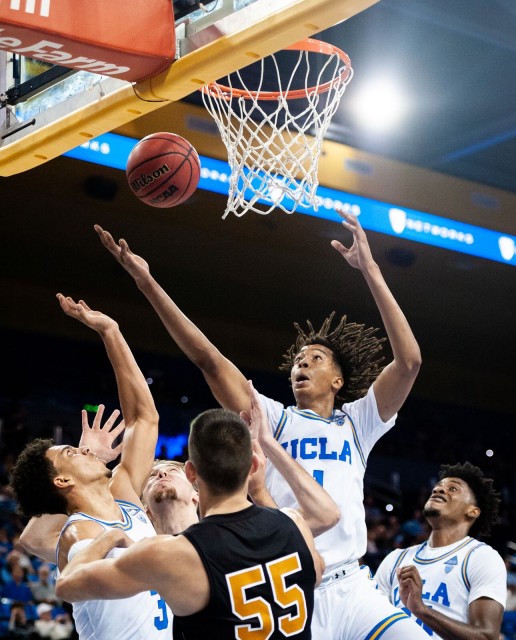 Freshman center Moses Brown put up nine double-doubles for UCLA men’s basketball last season. With Brown going to the NBA Draft, the Bruins will be without their top-three scorers from a year ago. (Liz Ketcham/Assistant Photo editor)

Moses Brown has made it official.

The freshman center’s name was on the official league-released list of underclassmen entering the 2019 NBA Draft. Although Brown has not made a personal statement confirming this, a team spokesman told the Los Angeles Times that Brown would enter the draft pool with no intention of returning to school.

Brown’s departure leaves UCLA men’s basketball without its top three scorers from last season – sophomore guards Kris Wilkes and Jaylen Hands, as well as Brown – despite not having a single graduating player. The three combined to average 41.3 points, 16.8 rebounds and 8.1 assists per game on the season.

In 31 starts, Brown averaged 9.7 points and 8.3 rebounds while playing 23.3 minutes a night and shooting 60.7% from the field. Brown ranked last on the team with a 35.2% mark from the free throw line, helping the Bruins to the No. 342 spot on the national free throw percentage leaderboards.

Hands and Wilkes reportedly played themselves out of first round grades from NBA scouts over the past two seasons, but Brown may still be in the mix. Anonymous scouts told the LA Times that the 7-foot-2-inch center has the physical and defensive tools to slide up into the top 30 if he can “wow” a team in a workout.

The scout also said Brown’s shot was “a joke.”

Brown was suspended from the team during the Pac-12 tournament for breaking university policy, but was later reinstated without further detail. He had also been benched prior to UCLA’s first game against Utah, but made his lone appearance on the court when the Bruins allowed a desperation buzzer-beater to lose at home.

UCLA is now left without a true center on its 2019-2020 roster, with rising redshirt senior Alex Olesinski and rising redshirt sophomore Jalen Hill now tied for the tallest player on the team at 6 feet, 10 inches.

The decision also leaves coach Mick Cronin and the Bruins with one more scholarship available for next season.

Brown has until May 29 to pull out of the draft and retain his amateur status, but he is not expected to do so.