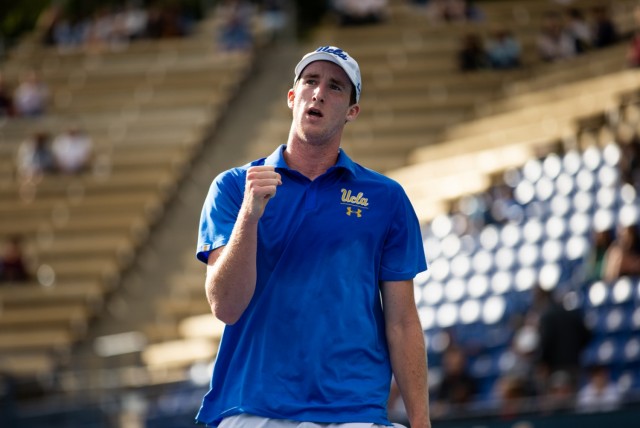 The Bruins have an NCAA champion doubles team for the second consecutive year.

The No. 2 seed duo of senior Maxime Cressy and sophomore Keegan Smith was the only doubles team representing UCLA men’s tennis at the NCAA doubles championships in Orlando, Florida. Beginning play Tuesday, Cressy and Smith won five straight matches to emerge as the 2019 doubles champions – the program’s 14th doubles title.

“I’ve been dreaming (of) winning a national championship for the last three years,” Cressy said. “I’ve dreamt of this moment since becoming a Bruin. To win it with (Smith) is an amazing way to end my (UCLA) career.”

The Bruins’ victory sealed an undefeated season for Cressy and Smith in all doubles competitions.

“I’m still amazed they went undefeated the entire season and didn’t lose one set in the entire NCAA tournament,” said coach Billy Martin. “I don’t know another doubles team at UCLA that has done that in my 36 years here. They may go down in the annals of college doubles as one of the best teams of all time.”

Cressy and Smith did not drop a set over the entirety of the competition and were only forced into a tiebreak once. Through the Bruins’ first four rounds of play, Cressy and Smith claimed straight-set victories over opponents from Old Dominion, Belmont, San Diego and Tennessee, respectively.

“There is pressure going into the tournament, being undefeated,” Smith said. “It’s a good feeling to get the pressure off our backs and finish strong. College tennis is awesome like that – you are a band of brothers and can share memories like this forever.”

Cressy and Smith faced Alabama’s Patrick Kaukovalta and Mazen Osama in the championship match. The Crimson Tide’s duo reached the finals by knocking out Mississippi State’s Niclas Braun and Giovanni Oradini – who had defeated the No. 1 seed from Baylor.

“We served very well today,” Cressy said. “As soon as we get a break, it’s a big mental advantage with respect to our opponents and puts a lot of pressure on them.”

A break chance was not converted in the second set until 4-4. Cressy and Smith completed the break of the Crimson Tide’s serve, pushing the set score to 5-4 and giving the Bruins the chance to serve for the championship.

Smith’s serving put the Bruins up 40-0 in the next game, and an ace from the ad-side of the court sealed the victory for the duo.

“I have no doubt in my mind that (Cressy) will be a top-20 player in the world in doubles,” Martin said. “We’ve had some great doubles players at UCLA – Mark Knowles, Julien Rojer – that have won Grand Slams, and I think (Cressy) is right there with those guys.”

No Bruin was able to advance past the second round.

Three players from UCLA men’s tennis competed in the singles competition of the NCAA championships in Orlando, Florida this week. Cressy, Smith and freshman Govind Nanda were all awarded berths to the competition.

Cressy, who was the highest-seeded Bruin, fell in his first round match to Wake Forest’s Bar Botzer 6-4, 6-2. Nanda was also unable to advance past his opening round. He was defeated by No. 8 seed Oliver Crawford of Florida 7-6, 6-3.

Smith was the only UCLA player to advance past the first round. He defeated Tulsa’s Majed Kilani 6-2, 6-2. Smith was eventually ousted by Tennessee’s Timo Stodder 7-6, 6-2.