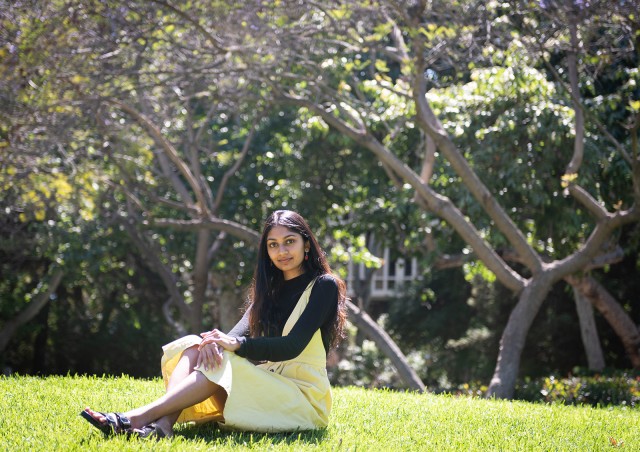 Suchita Kumar, a second-year physiological science student, said her fashion line, "Shaila," was inspired by memories of going through her mother’s closet when she was younger. The pieces showcase repurposed children's clothes mixed with current trends, with outfits spanning from casual wear to evening attire. (Kanishka Mehra/Daily Bruin)

After some tweaking, styles from Gap Kids can also suit adults.

Suchita Kumar, a second-year physiological science student, said she designed a fashion line fusing children’s wear with late 20th-century trends. The six-look collection will be featured Thursday as part of the annual Fashion and Student Trends runway show. Kumar’s line, titled “Shaila,” is inspired by childhood memories of rummaging through her mother’s closet for clothes that she then paired with her own, she said.

“I really like incorporating things from ’90s and ’80s children fashion, and even current children’s fashion and seeing how that can be modified to work for adult fashion,” Kumar said.

“I was going through (old) pictures, and I saw one of her sister wrapped with the blanket going over one shoulder, like a one-shoulder dress,” Shaila Kumar said. “I guess that aspect of creativity was still there back then.”

Growing up in Bangalore, India, Suchita Kumar found herself wearing a school uniform most of the time, limiting her opportunities to experiment with clothing. But going through the vibrant colors and patterns of her mom’s closet piqued her interest in the enjoyable side of fashion, she said. Following her move to Los Angeles, she faced fewer limitations on what she could wear in public, which rapidly grew her inclination toward fashion.

To recreate her childhood fashion experiments, Kumar said she used fabrics and colors similar to those she found in her mother’s closet. Her mother had a wealth of silk and satin garments, as well as a multitude of sheer, chiffon pieces of both Western and traditional Indian wear.

Kumar said her mother often wore brightly colored, heavy fabrics paired with sheer, light fabrics. While she visited Bangalore in the summer, Kumar and her mother shopped for fabric together, picking out bold-colored satin and netted tulle.

“(My mother) helped a lot with the narrative component of it, telling me what she remembers was fashionable when she was buying these clothes,” Kumar said.

Though all her pieces share a white and primary colors scheme, she said each outfit is best suited for a different occasion. The formality of the looks will progress throughout the show, the first outfit being a casual dress and the last an evening gown.

Many sources inspired the collection: some items are western renditions of traditional Indian garments. One of her looks is inspired by an “anarkali” – a long, A-line top traditionally paired with matching bottoms. Though her piece has a similar cut, its sheer material and lack of bottoms reimagines the Indian ensemble in a Western style, she said. Her final two looks are accessorized with a “dupatta,” a scarf that is a staple in Indian dress. Made from white tulle and red satin, the dupattas cover the models’ necks, accompanying a tube top in one outfit and a formal gown in the other.

Amy Fang, a second-year design media arts student and Kumar’s roommate, said Kumar would sew in their room whenever she had free time. Fang said Kumar would often bounce ideas off her during the conception phase of the line, and that she also helped with sewing. Kumar struggled with assembling muslin flowers onto a skirt, and Fang said struggling through these periods of frustration helped her roommate grow as a designer.

The concept for “Shaila” began as fond memories of her playing in her mother’s closet, and Shaila Kumar said Suchita has always dabbled in creative activities, such as knitting and creative writing, and she has enjoyed watching her childhood hobbies lead to the fashion line. Suchita Kumar said it was gratifying to make it all come together over the past year.

“It brings back that sense of nostalgia of rummaging through your mother’s closet and seeing what’s in there,” Suchita Kumar said. “(I’m) creating a novel experience where (the audience) gets to experience what it was like for me, … and how that experience was so foundational in the fashion choices (I made) later on.”