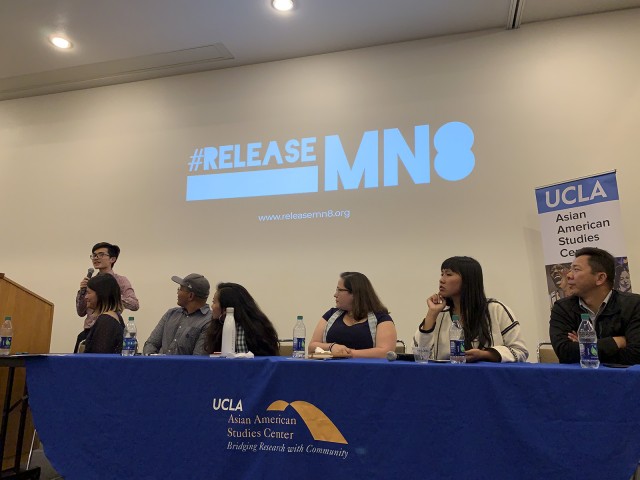 The Asian Pacific Coalition and other Southeast Asian groups in universities across the country advocated last week against deportations of members of the Southeast Asian American community. The week ended with a forum in which speakers discussed how to respond to deportation orders. (Courtesy of Jason Vu)

The Asian Pacific Coalition at UCLA, several of its member organizations and Southeast Asian student groups nationwide held a “week of action” last week to raise awareness about the issue. The week included a photo campaign and a forum. Other universities held film screenings, hosted social media campaigns and published deportation timelines.

Southeast Asian immigrants arrived in large numbers to the United States as refugees after the Vietnam War and Khmer Rouge genocide in Cambodia. They were granted refugee green cards when they arrived, but a green card holder charged with any crime carrying a sentence of a year in prison, including 265 days of probation, can have their green card revoked and be subject to deportation, Nguyen said.

Ngoc Nguyen, president of the Vietnamese Student Union, said it used to be unlikely for Southeast Asian American green card holders to be deported for a crime, but deportation rates increased after Trump became president.

She said she thinks the Trump administration has used criminal charges more frequently to deport immigrants than any previous president.

“If I search for ‘Southeast Asian’ in the … UCLA library, I’m always curious how many books I can find,” she said. “You can probably find one or two, but I’m pretty sure you can find that many even if you were to Google ‘Southeast Asians.’”

“The narrative of Southeast Asians is often being left out from the popular discourse,” Ngoc Nguyen said. “That makes it difficult for the issues of deportation in our community to be known about.”

To raise awareness about this problem, the APC began planning its “week of action” in winter quarter, Ngoc Nguyen said. It also offered a student-taught class in the Asian American Studies department spring quarter.

Johana Guerra Martinez, a third-year political science student and member of APC, said hearing the speakers reminded her of the work she has done to fight recent attempts to deport students’ family members.

“So I think the stories of the speakers, about the kind of efforts I often hear about, but to see it happening across the country in … another state like Minnesota, was really good to see,” she said. “Because we know that, you know, I know, I think for communities of color, it’s good to be part of community effort.”

Ngoc Nguyen said she hoped the event would spark awareness, both in her community and in UCLA as a whole.

“At the end of day, everyone is subject to deportations, and everyone’s in danger in certain ways,” Ngoc Nguyen said. “We just feel like we’re not in danger because we’re just stuck in this bubble and that we’re protected, but we’re not.”

She said the APC hoped to continue holding events to raise awareness and advocate against deportation next year.