How my time at The Bruin helped me flourish, forge friendships -30- 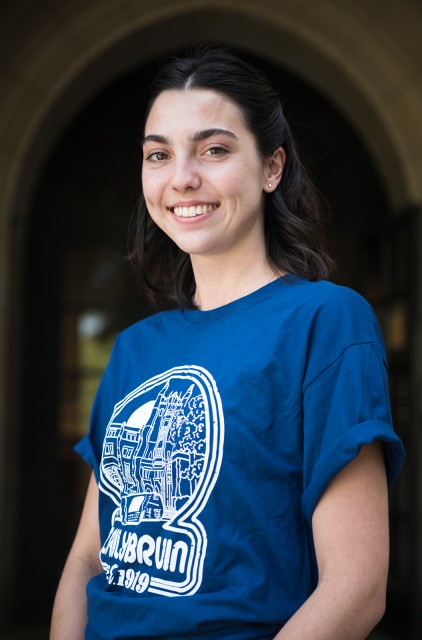 Well, this was rather unanticipated.

Lisa Aubry said she had no idea what to expect when she joined Daily Bruin as an Arts & Entertainment reporter – certainly not that she would conduct a meta-reportage of personal reflections three years later.

Never having written a journalistic article in her life prior to joining, Aubry said she huffed and puffed in dismay over the first round of edits. What a crimp on her style, she remembers thinking.

“I’m trained primarily in art history, (a field) which favors intensive observation, rich visual descriptions and elaborate academic arguments,” Aubry said. “I was not prepared to face the Daily Bruin’s goals of relaying information through informative but concise, snappy terms.”

Yet the more frequently and wholeheartedly she invested in teaching readers about others, the more she learned about herself, Aubry said. She said she recalls a few pivotal stories in her college journalism career that profoundly altered her mindset, sparking major self-discoveries. For one such article, Aubry said she interviewed a Swiss photographer who set up photography workshops in the West Bank. There, Israeli and Palestinian women experimented with photography and connected with one another for the first time.

Some of the women Aubry interviewed said they had never spoken to, much less truly observed, the “other” women. Only upon photographing one another did they notice the color of one another’s eyes, the idiosyncrasies and humanity of people they once perceived as enemies. Reporting the workshop initiative permitted Aubry to experience a concept she was beginning to suspect as myth: that art truly can transcend political, religious and linguistic barriers to change mindsets.

“I was at a time in my life where I began to question the validity of my area of study and whether it was actually applicable,” Aubry said. “This reportage not only mended, but reinvigorated my drive to apply my skills toward something as serviceable, progressive and courageous as the photographer and these women.”

Given this renewed confidence in her potential to make valuable contributions to society via art historical perspectives, Aubry said she launched a column “Art to Heart” in her final quarter at Daily Bruin. One facet of the column explored the crossovers between art and the sciences. Over the course of 10 weeks, conversations with experts in the fields of physics, astronomy, mathematics, biology and ecology nudged Aubry toward what she called a pivotal “aha” moment. She just might want to pursue this exploration of the potential between art-science partnerships all her life.

Existential and career-related epiphanies aside, Aubry said her Daily Bruin experience also profoundly enriched her life in other ways. It also introduced her to close friends and Cheese Club, which are nearly synonymous. Aubry said she set out to write a feature about the newly founded Cheese Club at UCLA. She said her initial reluctance to attend a meeting among total strangers dissolved as quickly as the first bite of honeyed goat cheese. Physical presence permitted Aubry to record observations and witty side-comments she could never have gained in remote interviews, she said. Needless to say, Aubry said she served as proud president to the Cheese Club this year, the discovery of which she ultimately owes to The Bruin.

“Writing about myself in the third-person is fun because I can never go wrong,” she said. “Diddily bop.”

At this point, Aubry said it is crucial to acknowledge that The Bruin is not some abstract journalistic entity, but rather nothing more – or less – than the writers and creatives that make it up. She said the first source she ever interviewed as part of her training, fellow A&E reporter Cam Vernali, has stuck around ever since.

“I just can’t seem to get rid of her,” Aubry said.

Both deeply interested in different art forms, technologies and writing, Aubry said she and Vernali swiftly transformed from acquaintances to close friends to roommates. Not long thereafter Aubry said she met A&E reporter Sidra Rashid, a fashionista with a contagious laugh who would also become her close friend and roommate.

Daily Bruin has always been a game of push and pull, Aubry said. Both quick-paced and in-depth, her interviews with opera and R&B singers, comedians, playwrights, dancers and other creatives kept her informed about the diversity of accomplishments in close proximity. Documenting such indispensable thinkers and creatives made her personal strive toward valuable societal, artistic and academic contribution all the more tangible.

The close friends, fellow reporters and insightful editors she encountered at Daily Bruin helped her track her own progress. Amid the overwhelming flurry of accomplishments, events and discoveries she reported, it was those in Daily Bruin who motivated her to deliver the utmost quality of writing and friendship.

“Thank you, Daily Bruin, for initially crimping my style but ultimately sparking my growth,” Aubry said.