In my time at The Bruin, I learned to value the story, not the storyteller -30- 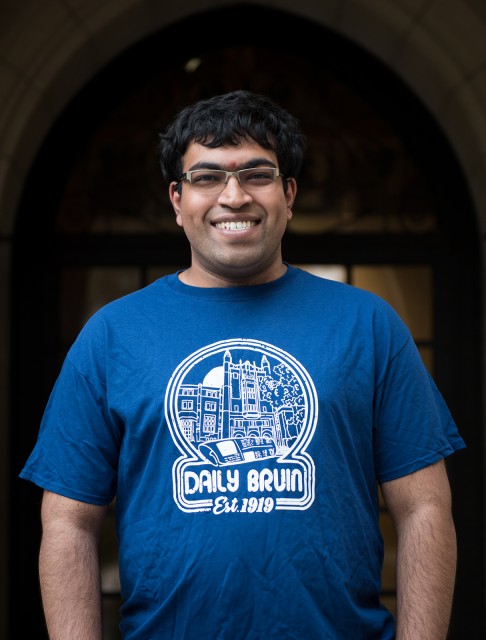 Storytellers have a curse: They’re not their stories.

And I could end my final column for the Daily Bruin right there.

But that would seem absurd, not just because you’d expect someone who’s edited nearly 40 of these farewell pieces to give you some quality words of wisdom, but also because you’d hope one of the most-feared journalists in Westwood can spare more than 12 words.

My sign-off column for the Daily Bruin has been eight years in the making. Back when I was far less a pain in Chancellor Gene Block’s rear end, I volunteered to be a summer campus guide to usher in bright-eyed seventh graders to our middle school. During the training for that too-social-for-Keshav-Tadimeti endeavor, the teacher in charge had some advice.

“There are three kinds of people,” she said. “Those who made it happen, those who saw it happen and those who wondered what happened.”

I don’t remember the context – perhaps she was talking about the dance-off hazing my whack middle school thought was cool in 2011.

Regardless, my mind was set: No way was I dancing to Justin Bieber, but no way was I missing the chance to see a bunch of short kids who think they can break dance.

It didn’t dawn on me until last year, when I was slaving away in Kerckhoff Hall 118 for my third iteration of the Daily Bruin Graduation Issue, that my middle school teacher’s words were the story of my life.

I see things that happen. I write about them for the people who wonder. And for the longest time, I believed being the fly on the wall was a chicken way of living.

But it took me three years at the Daily Bruin to realize that’s the story of every journalist. We observe the world around us and share with the community – be it as straight news reporting or as honest, value-driven opinions.

The Daily Bruin is filled with hundreds of these storytellers. Be it an admissions scandal, a murder-suicide, a blazing fire, a coercion-filled student government election, a botched response to a measles outbreak, allegations of bribery against athletics officials or the chancellor wanting to dip from the quarter system, the many awe-inspiring student-journalists of the windowless bayou that is UCLA’s unofficial journalism school put their heads together and report it to the Westwood community every day.

Not for the glory. And not for the red carpet walk.

That might seem hard to believe coming from me. I’ve been responsible for nearly every opinionated Daily Bruin piece you’ve read in the past three years. I authored 35 Opinion columns, and edited – or rewrote – close to 852 columns, editorials, podcasts, op-eds and letters to the editor. Close to every one of the past 459 issues of the newspaper has been sauteed with my structural edits, whipped with my wording changes or spiced up before served to the information-hungry Westwood populace. Heck, I even beat a special correspondent to the Los Angeles Times in a Twitter fight.

The byline appeal was nice. The name recognition boosted my ego. But I never did it for the glory.

I never won an award for a column I wrote – save for one I pieced together about the tetanus-inducing state of Boelter Hall’s bathrooms. I didn’t even get so much as a response from the Bruin Republicans, despite searing them alive in 919 words of spice. About all the fame I got was from the fact that I scared the living daylights out of the undergraduate student government via scathing columns and a graphic documenting how much they goofed around on social media.

But, to a large degree, none of that really matters. I told stories because they needed to be told, not so I could revel in a viral Twitter moment. Ironically, the most honest stories I edited or wrote without regard for what people thought garnered the most attention.

The projects I organized to shed light on the University of California’s institutionalization of sexual harassment and UCLA’s awkward relationship with equity, diversity and inclusion sent ripples through Murphy Hall. An editorial I drafted during the college admissions scandal about the cynically inaccessible state of higher education caught the eye of National Public Radio. And the editorial board’s rueful take on the UC’s attempts to protect harassers earned us the title of the best college newspaper editorial board in the nation.

Sure, not everyone told stories solely for the sake of them. Some of my colleagues co-opted the Daily Bruin to live out their fantasies while steamrolling others’. Some vilified their peers and courted the public’s support to lambast them.

It wasn’t pretty. Storytellers aren’t meant to be their stories, no matter how much they want to. Journalism is a mirror reflecting the truisms of our world, and the more you decorate it with vanities, the more you distract from its purpose.

I tried living by that ideal. I reflected UCLA and Westwood the best I could these past four years. I didn’t always get it right, and I certainly wasn’t always read.

But I lived the storyteller’s curse. And it was a beautiful one.

Tadimeti was the Daily Bruin's Opinion editor from 2017-2019 and an assistant Opinion editor in the 2016-2017 school year. He tends to write about issues pertaining to the higher education, state politics and the administration, and blogs occasionally about computer science. Tadimeti was also the executive producer of the "No Offense, But" and "In the Know" Daily Bruin Opinion podcasts.