Senior signoffs: Through good times and bad, Alaina Miller thanks UCLA for opportunities to grow 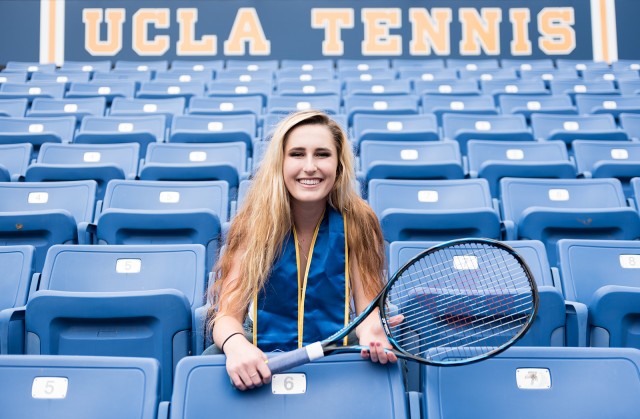 Miller played primarily at the No. 4 singles position and No. 3 doubles this year. Her senior year highlights included a seven-match win streak in singles to start the season, and an honorable mention Pac-12 All-Academic selection. (Liz Ketcham/Photo editor)

Through the many highs and lows of attending a top university over the last four years, UCLA fostered an environment in which I was able to grow and mature.

I first stepped on UCLA’s campus as a student-athlete in January 2016 after having just graduated early from high school in December. I was recruited to the women’s tennis team at the start of the team’s spring season and – being a naive 17-year-old – believed I was ready to conquer the world.

Attending college as a student-athlete seemed like the obvious next step in my quest, but, in the beginning, let’s just say reality kicked in and I got a big slice of humble pie.

I wouldn’t say my first year of school was easy – it was actually one of the hardest years I’ve been through. Although I know saying that as a 20-year-old probably doesn’t seem too powerful, the pressures of being both an athlete and a student were something I had never experienced at such a high level.

Being homeschooled, I hadn’t been in a real classroom for six years – let alone been in an environment with such an insurmountable amount of germs. My first week consisted of the flu, midnight fire alarms and showing up 20 minutes late to my first lecture after getting lost on campus.

Looking back at my freshman year, all I can say is thank you. Thank you UCLA for completely challenging every single aspect of my life, on and off the court. I truly believe that, had my first year not been so hard, I would not be the same person I am today.

I learned how to handle the tougher situations and excel when put under pressure. I grew a tremendous amount during a time when I had just barely learned how to drive. I was young and wide-eyed, but if I had to do it all over again, I 100% would. I learned how to appreciate the positives and grow from the negatives.

Being a student-athlete has been one of the toughest things I have had the pleasure of experiencing. The discipline required showed me what it is like to have a full-time job as an athlete and student, and it will no doubt help me in my future endeavors.

I have created another family in my teammates. Watching them grow beside me has truly been an honor, and I cannot thank them enough for being by my side every day, suffering and thriving as one.

It has been a privilege to represent the No. 1 public university through athletics and academics. I have established lifelong friendships and relationships that have made my time here some of the best years yet.

UCLA has allowed me to grow and expand my thinking in a way that will no doubt enrich my future. If I could say one thing to my freshman self, it would be to enjoy the lows because they lead to some of the greatest highs.

Thank you, UCLA. You will forever be in my heart.