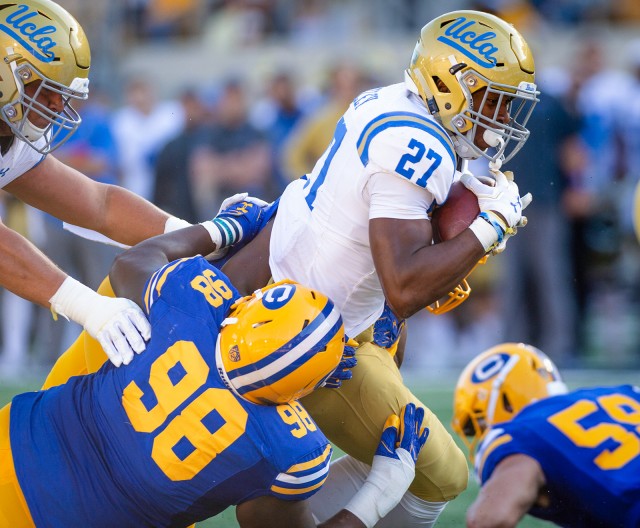 In a rough year for UCLA football, one Bruin stood out in a big way.

Joshua Kelley was a stud. The redshirt junior running back was UCLA’s primary offensive weapon in coach Chip Kelly’s rush-heavy offense and lived up to the task. Kelley averaged 5.5 yards per carry over 225 rushing attempts and amassed 12 rushing touchdowns this year.

No. 27 wasn’t originally UCLA’s workhorse – he was only given 14 total touches in the Bruins’ first two games. But after a stellar performance against Colorado on Sept. 28, when Kelley totaled 124 yards on 12 carries, the running back was solidified as UCLA’s biggest threat on offense.

After an 0-5 start to the season – the Bruins’ worst since 1943 – Kelley delivered a breakout performance to bring home UCLA’s first win. His 157 yards and three touchdowns on 30 attempts carried UCLAto a 37-7 drubbing of California.

However, Kelley’s GOAT – greatest of all time – moment came in UCLA’s biggest game of the year – UCLA-USC at the Rose Bowl.

The Bruins had already been eliminated from postseason contention, but their win versus the Trojans dealt a serious blow to USC’s hopes for a bowl game. Kelley’s 289 yards and two touchdowns in that game earned him the No. 3 spot on the all-time UCLA single-game rushing list.

His 1,243 total rushing yards on the season were tenth in UCLA single-season history. Even with his relatively little usage in the first few games, Kelley finished the season ninth in the FBS in rushing yards per game with 113.

Kelley was a rock for UCLA and came up big when the Bruins needed him, spearheading the Bruins’ attack in two crucial victories and performing among the best in college football.

They call her “Boss” for a reason.

Junior Kyla Ross added to her already decorated career with a record-breaking year for the Bruins. She won the West Region and Pac-12 Gymnast of the Year and was named as a finalist for the Honda Award.

Ross scored 14 perfect 10s over the season – an NCAA record – including 10 straight meets in which she achieved a perfect score in at least one event. She also became the first gymnast to accomplish two Gym Slams in the same season, scoring a perfect 10 on every event twice.

Although the Bruins did not have the same postseason success in 2019 as they did in 2018, Ross won both the vault and floor exercises at the NCAA Championships, becoming just the second person to ever win all four events at the NCAAs in her career. She had previously won the balance beam and uneven bars in 2017.

With one more season left in Westwood, Ross has the chance to break a UCLA record that has stood since 2004. Former UCLA gymnast Jamie Dantzscher currently holds the record for most perfect 10s as a Bruin with 28 during her collegiate career, while Ross sits at 19. If she has another season like this past one, Ross could continue to write herself into the record books.

On a team full of stars, freshman Megan Faraimo stood out.

The pitcher came to UCLA as last year’s high school Gatorade National Softball Player of the Year, and the expectations were high. She matched and surpassed those expectations, winning Pac-12 Freshman of the Year and being named to the NFCA All-West Region First Team.

Faraimo went 16-4 in 26 appearances for the Bruins, with her 1.44 ERA and her 5.5 strikeout-to-walk ratio both good for top 20 in the nation. The highlights of Faraimo’s season, however, were her two no-hitters – coming just eight days apart – versus Fresno State and Colorado State, respectively.

As the Bruins made their run at this season’s NCAA championship, Faraimo played a huge part in the effort, pitching in four postseason games – including a relief appearance in Game 1 of the Women’s College World Series final versus Oklahoma. She went 1-1 in the postseason with a 3.00 ERA, sending the Bruins to Oklahoma City with her series-clinching win against James Madison in the super regional.

And with three years left in her Bruin tenure, one can only guess how far this Rookie of the Year will go.

When Jack Ralston took the mound in the postseason last year, UCLA baseball’s season came to a close.

The then-redshirt sophomore right-hander capped off 2018 – his first season of game action – by allowing four earned runs in 1 1/3 innings of an elimination game against Minnesota, bumping his ERA to 6.44.

But after Jake Bird and Jon Olsen went pro and junior right-hander Ryan Garcia suffered a flexor injury in the offseason, Ralston entered the season as the Saturday starter.

Three and a half months later, Ralston was named an All-American.

The 6-foot-6-inch starter owns a 2.55 ERA and opened the season on an 11-0 tear. Ralston became a legitimate pro prospect, backing up his untapped physical tools by becoming a strikeout specialist and sitting down 41 batters over his last four appearances.

Maybe it was new pitching coach David Berg. Maybe it was a major technical adjustment in the offseason.

But for whatever reason, Ralston made a major leap this year, and Daily Bruin Sports isn’t the only organization that noticed – he got picked in the seventh round of the MLB Draft by the St. Louis Cardinals on Tuesday.

When most people think of UCLA gymnastics, they think of senior Katelyn Ohashi’s viral floor routines.

But beach volleyball senior Sarah Sponcil’s countless videos of her doing handstands around the world can’t be left out of the conversation.

Sponcil has made it a tradition to post videos of her walking on her hands wherever she goes: in front of St. Basil’s Cathedral in Moscow, on the beaches of Hawaii, in the midst of Disneyland’s sparkling attractions or just after practice.

A scroll through the two-time national champion’s Instagram will also reveal videos of her doing flips off cliffs and diving boards, riding a unicycle while spinning a basketball on one finger and pushing herself into a headstand on a paddleboard.

Okay, so maybe those aren’t gymnastics events per se – but it is more than most of us can do.

If Sponcil doesn’t qualify for the 2020 Olympics as a beach volleyball player, she might have gymnastics to fall back on.

Lauren Brzykcy ran the bases for UCLA softball this season.

The redshirt freshman goalkeeper played eight games with UCLA women’s soccer in 2018 before making a special guest appearance for softball in the NCAA regional championship in May.

Brzykcy was added to the softball roster as a pinch runner for just one weekend and ran the bases just once. Her one race around the diamond earned the Bruins a run.

The San Clemente, California, native was not on the softball roster for the super regional the following week and she will make her return to the soccer field this summer.

On the pitch, Brzykcy was named to the Pac-12 women’s soccer All-Freshman Team for her 13 saves and .77 goals allowed per game in 2018.

But she can now also call herself a member of an NCAA champion softball team – and she’ll probably get a championship ring to show for her one game.

Senior Maxime Cressy and sophomore Keegan Smith aren’t actually dating, but the duo is a match made in heaven.

Playing at the No. 1 doubles spot for UCLA men’s tennis, the two went undefeated in the 2019 season and capped off their campaign by bringing home the NCAA doubles championship – the program’s second in a row.

Cressy and Smith are the giants of the men’s tennis program – literally. Both standing at 6 feet, 7 inches, they were able to dominate their opponents with massive serves and quick hands at the net.

Nobody came close to threatening the duo at the NCAA doubles championship in Orlando. The two did not drop a single set in their five-match championship run and were forced into a tiebreak only once.

When there’s a doubles team whose serve can’t be broken, it’s shockingly hard for anybody to take them down.

In UCLA’s NCAA super regional match against Baylor, Cressy and Smith faced off against the No. 1 ranked team of Jimmy Bendeck and Sven Lah. The match remained unfinished, but Cressy and Smith were on serve, leading the Bears 5-4 when the match was called. They were points away from beating a team who held the No. 1 ranking for the previous seven weeks.

It takes a lot of chemistry for a doubles team to be successful, and it’s safe to say a connection like the one shared by Cressy and Smith is found once in a lifetime.

In terms of pure speed, there were some pretty fast athletes at UCLA this year.

Men’s basketball guard, sophomore Jaylen Hands, can probably make it up and down the court faster than any other player in the Pac-12. Freshman running back Kazmeir Allen blazed Cincinnati for a 74-yard touchdown in football’s season opener. Track and Field had its best year in decades, thanks in large part to a wave of new distance runners.

But in terms of who gets from point A to point B the fastest, the easy choice is sophomore Devon Bling.

Bling probably doesn’t have the pure, dynamic athleticism of Hands or Allen, and I don’t even know if he would win a 100-meter dash against his teammates on the men’s golf team. Lucky for Bling, there’s not a lot of running in golf – all you have to do is put the ball in the hole.

And no one does that faster than Bling.

Bling sank a hole-in-one on the final day of the Arizona Intercollegiate on Jan. 29. When he went to Augusta National to play in the 2019 Masters Tournament as an amateur, he sank another ace in the Par 3 Contest.

Technically speaking, Bling isn’t the one moving quickly in these cases – the ball is. But if all Bling has to do is swing his club once before he moves on to the next hole, I’ll give him credit anyways.