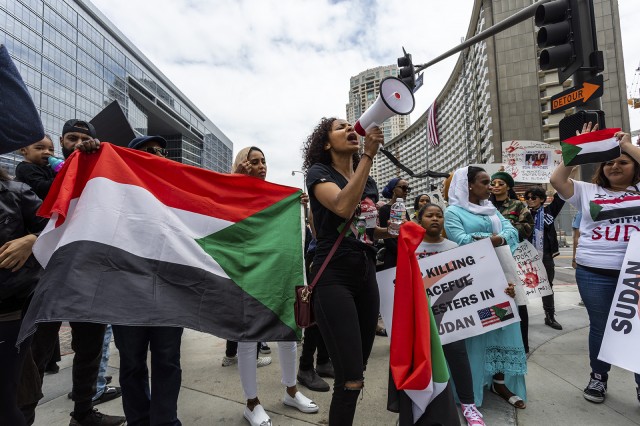 More than 100 people gathered in Sawtelle and Century City on Thursday to protest the military government of Sudan for violently repressing Sudan’s civilian revolution.

Members of the Los Angeles Sudanese community held a demonstration in front of the consulates general of Saudi Arabia and the United Arab Emirates to denounce their involvement in the revolution in Sudan.

The protesters also condemned recent acts committed against civilians by Sudan’s current military government and called for an end to the humanitarian crisis affecting the area.

Earlier in June, the Transitional Military Council, which currently governs Sudan, and the Rapid Support Forces, a government-operated paramilitary, attacked protesters in the capital of Sudan, Khartoum.

Omar al-Bashir, Sudan’s former president, was removed from office by the TMC in a military coup in April. Bashir held the position for almost 30 years and faced continued civilian protests throughout his term.

Instead of passing power on to the people, the TMC refused to cease control of Sudan, which prolonged the conflict between the people of Sudan and their government.

“Right now, the same leader that Bashir has championed to be his right hand, his crony in Darfur, has made himself the new president,” said Muntasir Tony Buori, the president of the Sudanese resource center Al Bait Al Sudani and a former political refugee.

Buori’s father acquired political asylum in the United States in 1994 following Bashir’s rise to power and Buori followed suit in 1996.

In the weeks following the coup, Saudi Arabia and the United Arab Emirates sent $3 billion in aid to the new Sudanese military regime. Protesters said this amounted to the two nations funding the TMC’s military and allowed the TMC to kill its opposition.

Buori said he thinks that, because poverty continues to be an issue in Sudan despite the foreign monetary aid the country has received, the funds have been funneled into the interests of Saudi Arabia and the United Arab Emirates.

“Things have gotten so exuberantly expensive that people couldn’t afford bread,” Buori said. “When you can’t feed your child and you live in one of the most richest and resourced countries in the world, you ask yourself why.”

Several students came to show their support for the Sudanese opposition.

Reel Eltahir, a daughter of Sudanese immigrants and a second-year life sciences student at UCLA, attended the protests as part of the Sudanese American community. She said the people of Sudan are no different from Americans in their desire for liberty.

Saria Abusalih, a Sudanese American and second-year undeclared student from UC Irvine, said the impact of the crisis in Sudan is personal and local because most Sudanese immigrants in America still have relatives in Sudan.

“We’ve been calling them constantly, trying to make sure that they are alive, because every day, you never know what’s going to happen over there,” Abusalih said.

Buori said he thinks the TMC is as complicit in allowing foreign influence by Saudi Arabia and the United Arab Emirates.

“The Sudanese government does not work for the Sudanese people,” Buori said. “It works for all the cronies outside of it.”