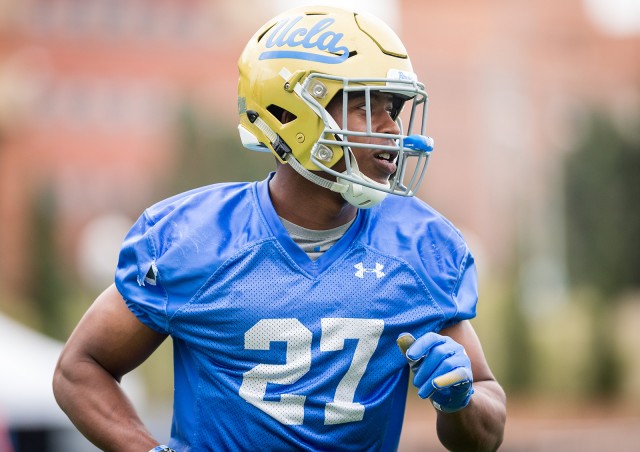 In the final four weeks leading up to the kickoff of UCLA football’s 2019 season, Sports editor Sam Connon and staff writer Jack Perez will be taking a look at the Bruins’ outlook at each position. From award favorites to comeback stories, Daily Bruin Sports will analyze each position’s depth chart and make predictions for how their seasons could unfold. Next up, running backs.

After breaking out last year, one thing is certain – redshirt senior Joshua Kelley will be the starter this year barring injury or suspension.

Last year, Kelley broke out for 1,243 yards and 12 touchdowns in 11 games as the primary back in coach Chip Kelly’s offense, taking the pressure off of then-freshman quarterback Dorian Thompson-Robinson and the often-injured graduate transfer quarterback Wilton Speight.

This season, Kelley should not be expected to carry the same load as last year, which may help him stay fresh and allow him to make more explosive runs. He accounted for almost half of the team’s carries in 2018, and he can hopefully prove to be nearly as good as LaMichael James was in his career under Kelly at Oregon. Kelley can be the Bruins’ version of James – the primary back who can always be relied upon while surrounded by specialists in the backfield.

If Kelley is James, then sophomore Kazmeir Allen could be the Bruins’ version of De’Anthony Thomas. Allen flashed his potential last season with a 74-yard touchdown carry against Cincinnati in his Bruin debut, but injuries limited him to nine games and 30 carries.

Fellow sophomore Martell Irby is the power to Allen’s speed. The San Diego native carried the ball 45 times for a total of 187 yards, and he may serve as the Bruins’ power back and main pass blocker in the backfield.

Both Irby and Allen – while they don’t come near the star potential of Kelley – are poised to take some of the load off their teammate’s shoulders this fall. After a full year in Westwood, the duo will likely contribute more than the 375 yards they did last season in order to keep Kelley fresh and injury-free.

Kelly brought in a few freshmen to help out if any of his top three go down. The two standouts are Jahmon McClendon from San Diego, California, and Keegan Jones from Cleveland, Tennessee. McClendon is expected to follow Irby’s path and become Kelly’s power back, while Jones is a star track athlete like Allen and will look to his speed to carry him.

Kelly likes his team to have the option to run the ball a lot.

Last year, they did not have that option in most of their games.

The Bruins were 85th in the nation in rushing yards per game behind teams such as Oregon State – which went 2-10 in 2018 – and California – which the Bruins beat 37-7. As the Bruins consistently fell behind early in games to start the year, the running game stalled and Thompson-Robinson or Speight were forced to throw the ball more often.

The Bruins had a simplified playbook to start the year, but they got more advanced as the year progressed and the players started to get more comfortable under Kelly. If they start out the year on the same page instead of adapting as the year goes on, Kelley, Allen and Irby should be more productive right out of the gate.

The Bruins’ best outlook with its running backs is to take some inspiration from Kelly’s Oregon and Philadelphia Eagles teams. Those squads usually had a primary back – James or former Eagle LeSean McCoy – complemented by specialty backs – Thomas or former Eagle Darren Sproles – that could serve as third-down backs.

The offensive line and Thompson-Robinson’s play should open space for each of the running backs if they both continue to improve. If the quarterback can force the defense out of the box with a few long throws or quick passes to the outside, the Bruins’ backs should be able to take advantage.

Kelley and Irby have both been working on pass-catching and pass-blocking, giving the offense more layers and deception to work with. By spreading the workload and the field, Kelly and the Bruins should be able to be much more creative in the backfield this fall.

Kelley is ready to take the next step in his final year with program.

He has now had two whole summers to learn Kelly’s offense, and he can be one of the conference’s best running backs if he is given the opportunity to get consistent meaningful carries.

For that to happen, everyone – including Allen and Irby – must help and improve. If Allen develops into a reliable receiving back, he can outrun almost anyone on the field and turn into a big presence on third down. Irby can give Thompson-Robinson more time in the passing game and convert short-yardage situations to keep Kelley fresh.

If those three combine to rush for 2,000 yards, the Bruins should be in a much better position than they were a year ago. UCLA has to establish a running game early and ride it to victory, or else the pressure will be on Thompson-Robinson, who – while he will likely improve – should not be asked to carry that load alone.

If the team takes a big step forward from top to bottom, the Bruins could hit 2,500 rushing yards, moving into at least the top 30 in rushing yards per game.

Kelley and his two sidekicks have had their time to settle in, and with familiarity finally on their side, they should have a field day breaking through opposing defenses.