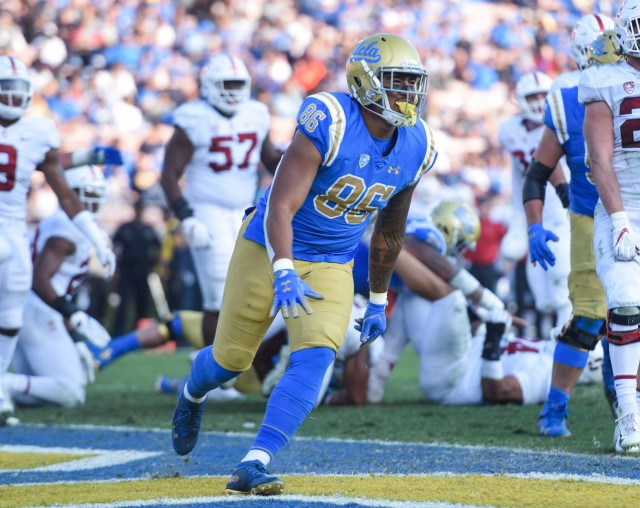 In the final four weeks leading up to the kickoff of UCLA football’s 2019 season, Sports editor Sam Connon and staff writer Jack Perez will be taking a look at the Bruins’ outlook at each position. From award favorites to comeback stories, Daily Bruin Sports will analyze each position’s depth chart and make predictions for how their seasons could unfold. Next up – tight ends.

The Bruins will have an opening at tight end following the departure of Caleb Wilson.

The top candidate for the job is redshirt junior Devin Asiasi. Last year, Asiasi was the Bruins’ primary backup at the tight end position, catching six passes for 130 yards and a touchdown in nine games.

Asiasi will be expected to play a bigger role in coach Chip Kelly’s offense this season. If the team is more focused on the running game, Asiasi will be a major part of the run-blocking, making way for redshirt senior Joshua Kelley – whenever he returns from injury – and company.

The Bruins have a committee behind Asiasi ready to step up and help carry the burden. Redshirt junior Jordan Wilson played in 10 games last season and should be the primary backup. After starting six games in 2017 with Caleb Wilson hurt, he should be seeing his playing time go back up in 2019.

An interesting X-factor could be redshirt junior Matt Lynch, who switched from quarterback to tight end during spring practices. While he may not play right away, his experience in identifying defensive schemes could help his teammates in the film room and on game day.

Kelly brought in two freshmen to the group of tight ends. Mike Martinez from Long Beach, California, played at Mater Dei – one of the top football programs in the nation. Michael Churich is from Burlingame, California, and comes from a football family, as his uncle and father both played for California.

Whether out of necessity or as part of the game plan, Caleb Wilson saw the ball thrown to him early and often during his final year as a Bruin.

Wilson led NCAA tight ends in receiving yards in 2018 with 965 yards, 133 more than the next player on the list. He did that while undergoing a coaching change and getting passes from two often-injured quarterbacks.

The Bruins’ playbook should be more advanced than last year, when Kelly was trying to make then-freshman Dorian Thompson-Robinson feel comfortable while being thrown into the starting role. The Las Vegas native threw to Wilson on the regular, with the tight end being both the Bruins’ primary check-down option and the team’s go-to target on deep crosses and seams.

With the running backs improving as pass catchers and the receiving corps having had a year to learn Kelly’s system, it would be a surprise to see the tight ends account for the same percentage of the team’s offense. Losing an NFL-caliber player causes a positional group to take a step back in productivity for every team in the country.

Thompson-Robinson’s improved play, along with an improved offensive line, should allow the Bruins’ wide receivers time to get open. However, with Kelly showing his willingness to lean on tight ends and running backs in the passing game, there is no doubt that Asiasi, Jordan Wilson and company will see their fair share of the ball in the fall.

Asiasi and Jordan Wilson performed well even behind Caleb Wilson. This year, they need to make the Bruin fans forget the past and get excited for the present.

Both have shown that they can catch the ball when asked. Doing it consistently while also helping out in the running game as part of a team that needs to revamp that area could be the difference in whether the Bruins go bowling or not.

While they are not expected to match Caleb Wilson’s production, the tight end group will need to at least pick up part of the slack. If this group of tight ends catches 50 passes for over 700 yards, they will relieve pressure from Kelley and the running backs and open things up for Thompson-Robinson in the passing game.

With a steady level of production from the tight ends in the Y-receiver role, the pain of losing Wilson should be relieved just enough to keep the position relevant in Kelly’s offense.

The Bruins’ tight ends will catch those 50 passes, while also being an integral part of a running game that eclipses 2500 yards and brings the Bruins back to a bowl game.