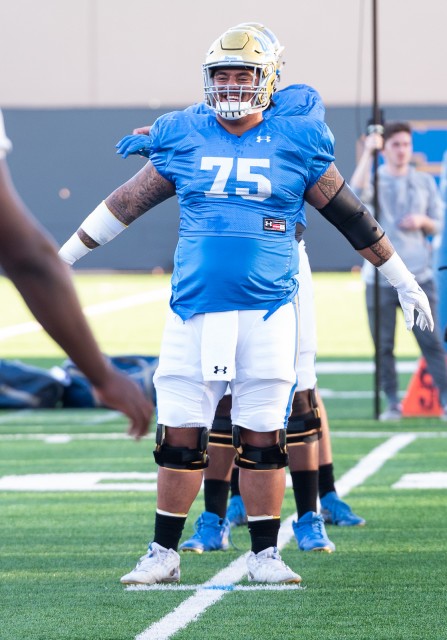 Senior center Boss Tagaloa made the switch from defensive line to offensive line last fall. Tagaloa was added to the Rimington Trophy watchlist for the nation’s best center in July. (Daanish Bhatti/Daily Bruin)

In the final four weeks leading up to the kickoff of UCLA football’s 2019 season, Sports editor Sam Connon and staff writer Jack Perez will be taking a look at the Bruins’ outlook at each position. From award favorites to comeback stories, Daily Bruin Sports will analyze each position’s depth chart and make predictions for how their seasons could unfold. Next up – the offensive line.

After starting last year with suspensions and uncertainty, the unit will start this year with more experience and depth across most of the line.

Senior center Boss Tagaloa is expected to play his first full season at the center position. After making the switch from defensive lineman following his sophomore season, Tagaloa stabilized the position and figures to lead the line during his final year in Westwood.

To Tagaloa’s left will be redshirt junior offensive lineman Michael Alves. Alves has been a mainstay on the line for two seasons and has experience at both guard positions if he needs to switch to the right side.

There is an open competition for sophomore quarterback Dorian Thompson-Robinson’s blind side protector with Andre James now on the Oakland Raiders. One of the most intriguing contenders is freshman Sean Rhyan, a top-150 recruit from Ladera Ranch, California.

On the right side, sophomore Christaphany Murray and redshirt junior Jake Burton will each return for their second seasons as the No. 1 options at right guard and right tackle, respectively. Although the two made some mistakes, they improved as the season went along and go into 2019 on an upward trajectory.

The Bruins almost completely overhauled their line last season, as coach Chip Kelly tried to switch things from a pro-style offense to more of a spread offense when he replaced former coach Jim Mora.

However, the change did not come easily, as the Bruins’ offensive line did not gel quickly and the Bruins’ running and passing games were stalled as a result.

The offensive line allowed 32 sacks in 12 games last season for 216 total yards lost. The 2.67 sacks per game average ranked 97th in the nation, and it showed as both Thompson-Robinson and former Bruin Wilton Speight were injured last year due to constant pressure.

Additionally, the running game struggled at the beginning of the year. Against Oklahoma – a team which ranked 59th in the nation with 159.8 running yards allowed per game – the Bruins put up only 129 rushing yards on 50 carries.

This year should be different, though. Both Thompson-Robinson and the running backs have spent a full year under Kelly now, and with both positions settled regarding who the definitive starters are, there should be improvement across the whole offense.

But even more crucially, the offensive line returns four starters and a fifth who was a top recruit, meaning the line should quickly gel and allow the skill positions time to run the offense the right way.

Thompson-Robinson is a very talented quarterback. But like every other quarterback, he can not throw from his back.

This should be the offensive line’s No. 1 priority: Keep Thompson-Robinson upright and give him enough time to make the plays we have seen he can make.

In the running game, the offensive line has learned all of Kelly’s schemes and should be able to provide the running backs the holes they need to break big runs consistently, just as they did against USC last year.

The final main priority should be staying healthy. Lines that build trust and understanding with each other over time are key in successful teams and lead to breakout moments from the players in the backfield.

The offensive line will take a huge step forward this year, and could likely allow two sacks per game after allowing 2.67 per game last year. They will also help Thompson-Robinson stay healthy while starting at least nine games together as a unit and help the Bruins go to their first bowl game under Kelly.