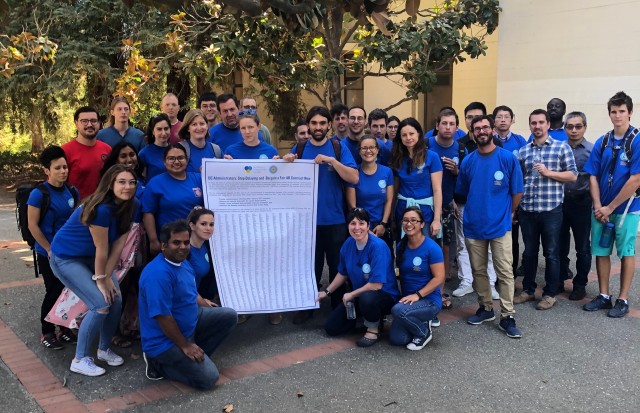 Over 2,000 academic researchers at the University of California signed a petition urging the UC to stop stalling negotiations, according to a press release.

Academic Researchers United/United Auto Workers Local 5810, the union representing over 4,000 UC academic researchers, has been bargaining with the UC since May for its first-ever contract.

Academic researchers delivered the petition to every UC chancellor’s office and spoke with each campus’ chancellor or other high-level administrators about issues that affect them, including a lack of job security, low compensation and inequities in the workplace.

Neal Sweeney, who is the vice president of UAW Local 5810, said the union made proposals on over 40 articles in the prospective contract by early June. However, he said he thinks the UC has not been responsive to the union’s proposals.

For instance, Sweeney said the UC has not agreed to the same nondiscrimination protections and sexual harassment protections that unionized academic student employees and postdoctoral researchers have in their contract.

UC spokesperson Elisa Smith said the University has already reached a tentative agreement on 15 articles in the proposed contract and is continuing to work hard to provide ARU with a fair agreement as quickly as possible.

“Since this is a brand new contract, it takes some time to reach agreement as we do not have a prior bargaining agreement to work from, and considerable thought and discussion are required in chartering new territory with unique issues,” Smith said.

Christina Priest, who is an assistant project scientist for UCLA and a member of the ARU bargaining team, said academic researchers want negotiations to go more quickly to improve their working conditions and make their jobs more secure.

“We don’t have any job security, and we have a really uncertain career path,” Priest said. “There’s some people that (are) worried about whether they’re going to have a job next month, so it’s obviously a very pressing thing for them.”

Sweeney said the University hires academic researchers under a contract that must be renewed every year or in some cases, every month.

“It’s kind of a permanent state of precarity,” Sweeney said. “We never feel that we’re secure in our jobs.”

ARU requested in its ninth bargaining session Friday that the UC hire academic researchers under a minimum appointment of several years at a time, varying by researcher title, since it usually takes two to four years to complete a research project, Sweeney said.

He also said international researchers, in particular, need longer appointments to avoid problems with their visas.

The UC’s proposals do not include a minimum appointment length, according to ARU’s website.

Priest said academic researchers are also negotiating for higher salaries that take into account the high cost of living in California and any discrepancies in pay between the UC and peer institutions.

“We just want to make sure that people are being compensated fairly for the level of experience that they have and to be able to do their job without having to worry about how they’re going to pay their rent,” Priest said.

Sweeney said ARU proposed a specific salary scale Friday detailing salary increases for the different research titles. The UC’s current proposal provides 2% to 3% salary increases per year, which falls short of matching the 3.1% to 3.4% predicted inflation in California over the next four years.

Women are underrepresented in STEM fields, making up just 22% of the STEM workforce in the United States in 2016.

“This is kind of a long-told story that women feel that they are not welcome, and then they get pushed out,” Sweeney said.

Sweeney said women should not have to choose between their careers and starting a family. The UC’s proposal on leaves of absence does not provide paid parental leave.

Priest said she thinks the UC should reach an agreement with ARU to create a more equitable and inclusive workplace.