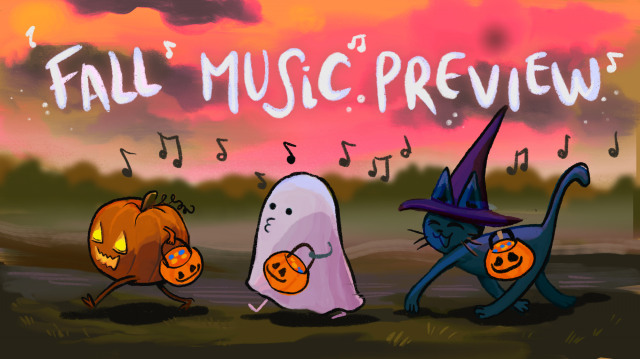 There’s no need to dread days getting shorter and the weather cooling as the seasons change – the hope and warmth of new music for fall is close in sight. The upbeat positivity of Lizzo’s “Truth Hurts” and the tender softness of Taylor Swift’s “Lover” have dominated the airwaves for the first half of 2019. But as the leaves drift to the ground, listeners can look forward to releases from new and old favorites alike.

Laid-back autumn nights pair well with the minimalistic sound of a new Cigarettes After Sex album.

The band’s sophomore release “Cry” is set to be available Oct. 25, following its first record, “Cigarettes After Sex.” Easing into its new album drop, its single “Heavenly” debuted in late August with a similar soft rock sound, akin to its 2017 self-titled collection.

Frontman Greg Gonzalez said the location where they recorded their new album had a high impact on its signature sound. Gonzalez said he saw the album, which was recorded at a mansion on the Balearic Island of Mallorca, as a film with interconnecting characters and settings – all eventually falling into place to create the album fans will hear this fall.

Based on the sound of “Heavenly,” listeners can expect a similar stripped-back tone as the band’s debut release but will have to wait until the album drops in its entirety to see if Cigarettes After Sex has any new tricks up its sleeve.

[RELATED: Fall movies will be filled with Oscar contenders and hopeful holiday classics]

Over two years after the release of “LA DIVINE,” Cold War Kids is set to release its first of three volumes of albums Nov. 1.

Vocalist, pianist and guitarist Nathan Willet said the band was inspired by artists such as Kids See Ghosts and Pusha T to make an eight-track album; Willet said their songs felt more effortless in terms of writing, like they were written the night before. They decided to release three eight-track volumes so each music release is spread out and casual.

The indie rock band accompanied the announcement of the upcoming album with the release of two singles, “4th of July” and “Complainer” – the latter including a music video. The song “4th of July” features jazzy piano riffs and harmonic vocals, while “Complainer” centers on a catchy bassline and danceable groove. The band’s third sentimental single, “Waiting for Your Love,” followed close in suit, when the album’s title was officially announced.

With three albums, 24 songs and at least one tour, the bandmates of Cold War Kids seem to be truly embracing a “new age” in their musical career.

Genre bending is nothing new for Waterparks, and with its upcoming record close on the horizon, it cannot simply be deemed a pop punk band.

Its third album, “FANDOM,” is slated to release Oct. 11 following its 2018 LP, “Entertainment.” With the band’s shift from Equal Vision Records to Hopeless Records earlier this year, it has gained more freedom over its sound and release schedule. With this newfound control, lead singer and lyricist Awsten Knight scrapped the band’s would-be third album, “Friendly Reminder,” in exchange for the overtly honest and sonically jarring “FANDOM.”

Since late spring, Knight has spilled songs for the upcoming album via Instagram Live and has hinted at lyrics through cryptic tweets. The aggressive tones of lead single “Turbulent” and poppiness of “Dream Boy” demonstrate the band’s evolution from its emo punk beginnings into a new cinematic and groundbreaking sound.

Rumored to be 15 tracks in length, “FANDOM” will certainly draw mixed reviews from those fans rooted in the past who are scared to hear the band’s sound change.

City and Colour “A Pill for Loneliness”

City and Colour – also known as solo artist Dallas Green – will release album “A Pill for Loneliness” on Oct. 4, four years since its last solo album.

Green has been busy since September 2018, having formed his own record label, Still Records, which will release his sixth studio record. Based on three released singles, “A Pill for Loneliness” seems to feature less acoustic guitar than his previous albums. Other than live performance compilation album, “Guide Me Back Home,” City and Colour has not released new music since the 2015 LP “If I Should Go Before You.”

Green announced the album and released its opener, “Living in Lightning,” following the debut singles “Astronaut” and “Strangers.” Green dabbles in the punk rock genre with gritty electric guitar and synthesized sounds in “Strangers,” which became the No. 2 single on Billboard’s Canada Rock chart.

Per the album title, the profound lyrics and diverse musical sounds of Green’s songs may help listeners feel a little less lonely.

The Who is jumping back into the music game with its new close but not quite self-titled album.

The band is returning with “WHO,” its first full-length release in 13 years. Fans have been satiated throughout the years with four albums – each featuring live recordings of a sporadic handful of The Who’s concerts since its last original release, “Endless Wire.”

Leading the band into a new era is its first single, “Ball and Chain.” The Who’s guitarist and primary lyricist, Pete Townshend, said the songwriting process for the band was new for this release. The band paid little attention to crafting storyline and a cohesive feel for “WHO,” Townshend said. Rather, it will just be a collection of songs that he and the band have been recording since March.

Listeners have a taste of the album with its lead single, but with the full record releasing Nov. 22, it will be telling to see if the classic band still has a place in the hearts of nostalgic and new listeners alike.