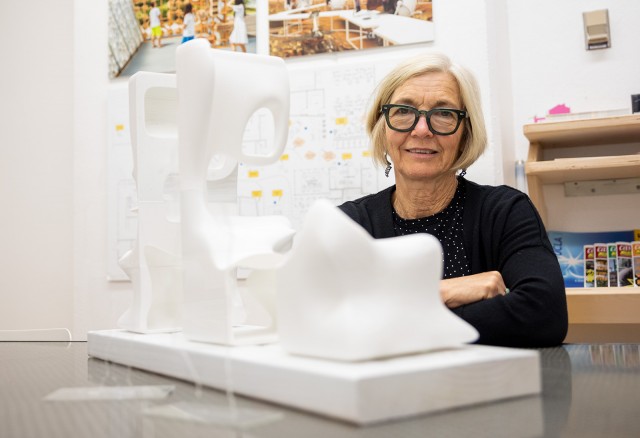 Dana Cuff, a professor in the School of Arts and Architecture, received the Women in Architecture Award for advocacy in September. She received the distinction for her work as director of cityLAB, a UCLA think tank that develops design projects to tackle urban housing problems. (Ashley Kenney/Daily Bruin)

In Dana Cuff’s vision for the future of Los Angeles, architecture is the solution to the housing crisis.

Cuff, a professor in the department of architecture and urban design, was honored by professional journal Architectural Record on Sept. 6 for her architectural design research to make housing more accessible. Cuff was one of five women to receive the journal’s annual Women in Architecture Award.

CityLAB develops its own projects focusing on the future of urban design and the concept of “spatial justice,” Cuff said.

“(Spatial justice) is probably the kind of watchword in everything we do — thinking about inclusive, equitable, urban architecture,” she said.

Cuff said she thinks the award is representative of a transitional era in which the architectural community has realized the importance of recognizing women, given that architectural awards have historically been dominated by white men.

“If you look at the women that are in the group of five that I’m part of, they’re really stunning practitioners that don’t need to be singled out by their gender,” Cuff said. “But, it’s because of structural circumstances that the journal decided to try and elevate the status of women in the field.”

Cuff has researched public housing and segregation for 30 years. After working on issues of affordable housing, segregation and discrimination embedded into national public housing programs, she said she wanted to put theory into practice.

Thirteen years ago, she co-founded cityLAB at UCLA with adjunct professor Roger Sherman. Her aim was to apply her research in a way that would benefit the public, Cuff said.

Since its founding, cityLAB has advocated for legislation to allow legal backyard homes, researched Westwood’s revitalization efforts and designed solutions for commuter students.

Its Backyard Homes project successfully advocated in 2017 to allow for additional housing units on plots for single-family homes. This produced 8.1 million sites available for housing in people’s backyards in Los Angeles, Cuff said.

“We wouldn’t have known how to write the policy if we hadn’t done all the architectural research,” Cuff said. “So the word for that is ‘architecture as a form of activism.’”

Most architectural researchers don’t like to work in the overlap between politics and architecture like Cuff does, said Kenny Wong, a graduate student and former cityLAB fellow.

“Her activism comes out of this willingness to engage with confidence and with enthusiasm, and with a real strategic mind about how to go about addressing very political issues that these fields should be involved in,” Wong said. “And so that leadership is inspiring.”

CityLAB has also done research specific to UCLA. In 2012, a cityLAB study found Westwood had the highest housing rental rates in Los Angeles. This was the starting point for cityLAB to create partnerships with legislators and university administrators who want to solve the student housing crisis, Cuff said.

“(Students) have some of the same housing problems of other people in Los Angeles, even more so because you can’t have a full time job, or if you do, your schoolwork really suffers,” Cuff said.

In collaboration with UCLA Transportation, cityLAB’s Next Gen Dorms project is developing dorm designs to accommodate the needs of nontraditional students and “super commuters,” or students who travel more than 90 minutes to campus every day, Cuff said.

The classic design of dorms has not changed in nearly 300 years, Cuff said. University residence halls were designed for the traditional middle-class student between the ages of 17 and 21 who goes home for a summer, lives alone and has somebody paying for them. Some studies show the traditional student accounts for less than 25% of all students, she said.

Next Gen Dorms would include on-campus spaces for cooking, storage and napping, according to cityLAB’s website.

Gus Wendel, assistant director of cityLAB and Cuff’s former student, said Cuff makes change by bringing in different perspectives from other departments in the university.

“(Cuff) is constantly bringing in students and faculty from across different disciplines in order to see what kinds of new thinking can happen around some of the most pressing issues facing the city,” Wendel said.

Situating cityLAB at UCLA was a unique opportunity for Cuff to research issues such as affordable housing because architecture is typically guided by client-based commissions, Cuff said.

“There’s an element of public good to it,” Cuff said. “This is exactly where we should be doing this. And the work that we do should be benefiting the public, which is why affordable housing is such a natural focus.”

Cuff added she couldn’t have created cityLAB anywhere except UCLA and Los Angeles.

“Los Angeles is a city that’s so emergent and uncodified,” she said. “So if you think about New York, right? You have a total image of it, it’s on a grid, it’s a 19th-century city. And when you think about Los Angeles, … it’s a suburban sprawl. It doesn’t seem to have any form. And so people don’t have a fixed image of what it is or should be.”

She said because of this, she found Los Angeles to be much more experimental.

“For someone who does kind of innovative architectural research, that’s perfect,” Cuff said. “Because then you can make propositions and people don’t say, ‘Oh, that doesn’t belong here.’ Anything can belong here.”