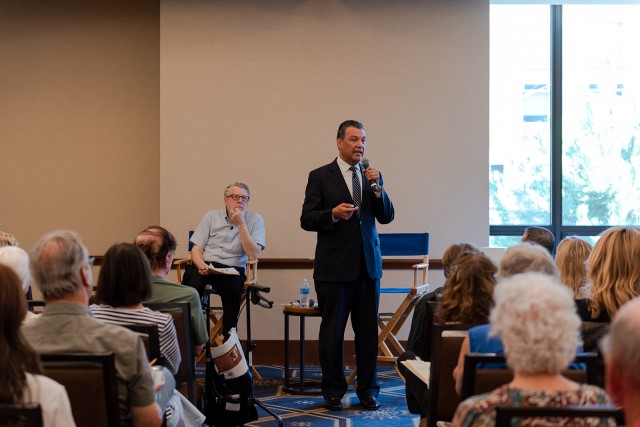 Alex Padilla, the California secretary of state, spoke at an event for the Osher Lifelong Learning Institute on Thursday. He said his office is currently working on increasing voter participation and enforcing voter security. (Daanish Bhatti/Daily Bruin)

The California secretary of state said his office is working on increasing voter participation and enforcing voter security at a university event Thursday.

Alex Padilla spoke at an event for the Osher Lifelong Learning Institute on Thursday about the upcoming 2020 elections. As secretary of state, Padilla is responsible for organizing and coordinating California elections. He said election security has been put under a particular spotlight after the 2016 election.

“When I was first running for secretary, there were many questions about ‘what are you going to do to get more people to register to vote or to encourage people to vote,’ (and) very few questions were about the election cybersecurity, no questions about potential foreign interference in our elections,” Padilla said. “But then 2016 happened, and now our way of looking at things has fundamentally changed.”

Major concerns were raised in regards to the potential of voter fraud and voter suppression, said Robert Stern, the host of the event and the former president of the Los Angeles-based Center for Governmental Studies.

However, Padilla said voter fraud has proven to be rare by documentations and research.

Unlike voter fraud, voter suppression has been quantified and demonstrated in various states, Padilla said. Through the false pretext of preventing voter fraud, lawmakers are disenfranchising eligible voters, particularly voters from low-income communities and communities of color.

Carl Singerman, a student at OLLI, said he came to the event because he wanted to understand more about issues surrounding the 2020 election and solutions to some of these challenges.

Singerman said he was most concerned about voter suppression because of its enormous consequences.

“It’s very scary to see how voter suppression is being implemented throughout the nation, and I wanted to hear what things are being done to counter that,” he said.

Padilla also addressed the issues of misinformation on social media and the undermining of election infrastructures.

To address the possibility of compromised election infrastructures, California has conducted agencywide audits and has updated its servers and firewalls on its voting system. California has also led cybersecurity training in every county, Padilla said.

Beverly Sheldon, another student of OLLI, said she is most interested in voter participation in the coming election.

“I’m impressed with some of the changes that they are making to voter accessibility,” Sheldon said. “They are making voting more accessible to the population.”

As secretary of state, Padilla sponsored the California Voters’ Choice Act, which aims to make elections more secure and convenient for voters.

Under the Voters’ Choice Act, voters will automatically receive their ballot in the mail one month prior to election day, Padilla said. Voters will have options to either mail the ballot back or to drop it off at ballot boxes across the county at any given time in the weeks prior to the election.

New polling stations will have the entire county’s voter information instead of just the neighborhood, which means that voters will have access to every polling station in the county and are able to vote in the weeks leading up to the election, Padilla said.

Qu is the 2020-2021 Assistant News editor for the Campus Politics beat. He was previously a reporter for the National News and Higher Education beat. Qu is a third-year statistics and political science student at UCLA.