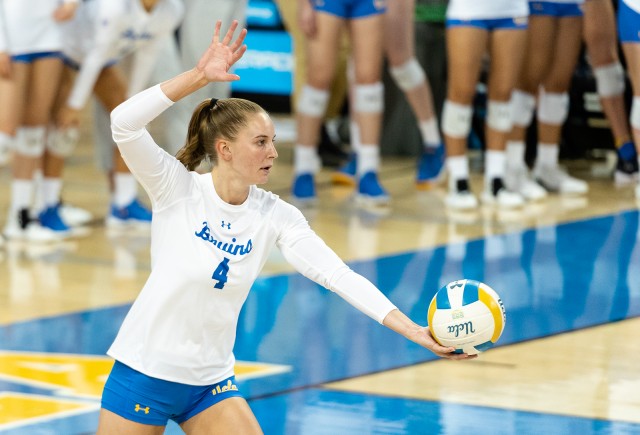 The Bruins are back in action against two ranked conference foes.

The Bruins had a successful first weekend of conference play, first taking down then-No. 25 USC in five sets for their first victory over a ranked team this season. UCLA followed that up with a sweep over Arizona State.

As a result, the Bruins are coming into the weekend tied for first place in the Pac-12 with another unranked team, despite there being six other teams in the conference ranked in the top 25 nationally.

“I think the (Pac-12) is going to be crazier this year than any other year,” said coach Michael Sealy. “It’s not about top of the conference, bottom of the conference – everyone’s talented. I think even the top teams have had off nights, so you’re going to see a lot of parity.”

In the Huskies’ opening match of Pac-12 play, they were defeated by in-state rival Washington State in four sets.

Washington recovered and pulled off an upset of its own over then-No. 1 Stanford four days later, defeating the defending national champion in four sets to hand the Cardinal their first Pac-12 loss since November 2017.

After Washington State pulled off its upset over Washington, the Cougars were defeated by then-No. 21 California in five sets later that weekend to also drop from first place in the conference.

During nonconference play, Washington State suffered only one loss, which came in its second game of the season, when unranked Iowa swept the then-No. 22 Cougars. Washington State bounced back from the loss to ride an 11-game winning streak up until its loss to the Golden Bears.

“It just goes to show that you can’t take any team lightly. … It’s not like you’re walking in saying, ‘Oh, this is going to be an easy win.’ You’ve got to take everyone seriously,” said junior outside hitter Jenny Mosser. “It’s cool we’ve got two wins, but that doesn’t mean anything, we still have to be prepared for both Washingtons.”

Washington is led on offense by outside hitter Kara Bajema, who ranks third in the Pac-12 with 4.37 kills per set, just ahead of UCLA’s junior outside hitter Mac May, who has 4.34.

The Huskies are also the second-best blocking team in the conference, averaging 2.73 blocks per set, while the Bruins are in second-to-last place in that category.

“We know that they’re a really big team, they play the ball really fast, so we need to be really efficient with our systems and our blocking,” said redshirt sophomore middle blocker Sabrina Smith. “And we need to use it to our advantage, their hands being up, (thinking) of other things, like tipping, instead of trying to beat them with force.”

Washington State ranks right behind UCLA in conference standings in kills per set and digs per set, but where the Cougars excel is at the service line. They have 89 aces and average 1.93 aces per set – both top in the conference – while the Bruins have just 50 aces, led by May, who has 13 on the year.