Throwback Thursday: Roommate contracts have been solving disputes for decades 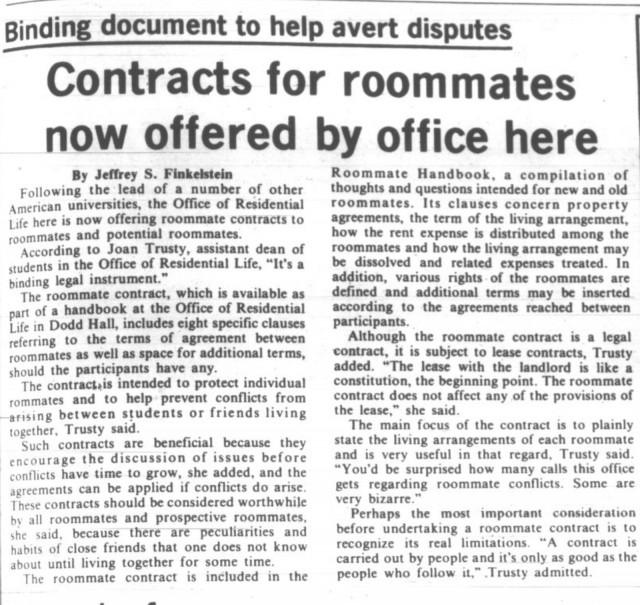 Throwback Thursdays are our chance to reflect on past events on or near campus and relate them to the present day. Each week, we showcase and analyze an old article from the Daily Bruin archives in an effort to chronicle the campus’ history.

It’s the beginning of the year, and getting into a conflict with a brand-new roommate can seem like unnavigable territory.

However, the path to building a trusting relationship became easier in October 1978, when the UCLA Office of Residential Life made roommate contracts available to students living in university housing for the first time.

These days, roommate contracts have become a norm at UCLA. Each and every student must meet with their roommates and resident assistant within the first few weeks of fall quarter, without exception. However, this wasn’t always the case.

The roommate contract was introduced in 1978 to open a proactive discussion about potential issues between roommates before they arose, according to Joan Trusty, the assistant dean of students in the Office of Residential Life at the time.

She said roommate contracts are worthwhile because even when living with friends, disagreements can arise that are impossible to foresee.

While the roommate agreement is a legal document, Trusty said it would only be as good as the people who follow it.

[Related: The Quad: Tips to prevent, resolve conflict with roommates on the Hill]

Over 40 years later, the roommate contract is still going strong. The contracts have evolved into discussing less logistics and more small details involved in sharing a space, from having guests over to sharing belongings.

Some disagreements, however, are too big for even the most comprehensive contract to solve.

If roommates happen to have irreconcilable differences, they are able to change their living situations by swapping rooms with another student. This was not an option in 1978, where roommate contracts were only starting to emerge at universities nationwide with basic guidelines.

Roommate swap events take place every quarter, but they are still not a magical solution. Room swaps depend on availability, and a student is not guaranteed to be swapped. UCLA Housing will only make swaps early in the year before the official event if it is an emergency.

The contract serves as a binding agreement at the start of the year that outlines rules for if conflicts arise.

Students often find themselves in difficult roommate situations that they are unable to get out of, but the issues may be alleviated by the aforementioned roommate contract, which all parties agree to at the start of the academic year.

The roommate contract has become much more detailed and relevant since 1978, and it is a useful resource when it comes to mediating issues that were previously discussed and agreed upon. RAs and roommates alike can only hope the contracts will continue to mediate quarrels for the next 40 years as they have done for the past 40.