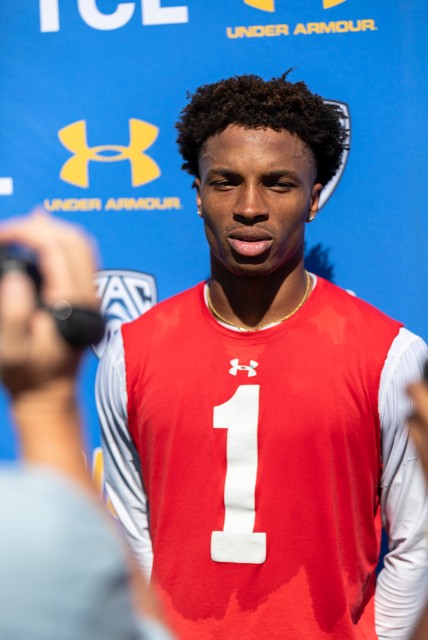 Sophomore quarterback Dorian Thompson-Robinson tallied season-high rushing yards against Stanford after missing UCLA's previous game against Oregon State because of a leg injury. Thompson-Robinson has three rushing touchdowns this season, with one of them coming against the Cardinal on Thursday. (Tanmay Shankar/Assistant Photo editor)

Dorian Thompson-Robinson has yet to see through a full win at the Rose Bowl.

The sophomore quarterback started in three home games during the 2018 season for UCLA football (2-5, 2-2 Pac-12) where the Bruins managed to pull only one home win with Thompson-Robinson at the helm. That win came against Arizona, but it was former quarterback Wilton Speight who finished out the game after Thompson-Robinson left the field in the first half due to injury.

This season, the Bruins have yet to win at home – with or without Thompson-Robinson, who has started in six of UCLA’s last seven games.

“This is going to be my first game with all of the students back,” Thompson-Robinson said. “I’m excited to get back out there and play in front of everybody. I’m more so excited to try and get the win and prove to everybody what we can do as an offense.”

Thompson-Robinson has missed one game this season – UCLA’s Oct. 5 home matchup against Oregon State – after he departed the Bruins’ previous game against the Arizona because of a leg injury.

In his return against Stanford, the sophomore quarterback had a season-best outing in rushing yards with 66, his longest rush going for 39 yards in the first quarter.

Thompson-Robinson also added a rushing touchdown in the second quarter to put the Bruins up 21-10 on the night. Thompson-Robinson said he was given more read-option opportunities against the Cardinal in order to hurt their defense with his legs.

“I think coach (Chip) Kelly really wanted me to implement my legs a little more,” Thompson-Robinson said. “Just giving me that option to go through my reads a little bit more, he gave me that freedom.”

Thompson-Robinson said his ability to use his legs will allow the Bruins’ running game to do more damage to opposing defenses as well – just as how redshirt senior running back Joshua Kelley rushed for a season-high 176 yards versus the Cardinal.

“When you don’t have me as an option, they’re zeroing in on (Kelley), or (redshirt junior running back Demetric) Felton or whoever is in at running back,” Thompson-Robinson said. “So it gives us another advantage going into the game when the defense has to worry about me and (Kelley).”

Thompson-Robinson and the UCLA offense will take on No. 24 Arizona State at the Rose Bowl on Saturday. The Sun Devils come into Saturday’s matchup ranked No. 18 in rushing defense and No. 93 in passing yards allowed, having given up 342 offensive yards in their last game with No. 12 Utah.

Consistency on both sides of the ball

The UCLA defense had a season-best outing against Stanford on Thursday, and redshirt junior defensive lineman Osa Odighizuwa said the win showed the team’s ability to make impacts on both offense and defense.

“There’s been games where we’re on, they’re off and they’re on, we’re off,” Odighizuwa said. “It was great to be on the same page and just everybody eats.”

Odighizuwa said the Bruins’ ability to make plays in the Cardinal backfield early allowed the entire defensive unit to apply pressure throughout the game. But against Arizona State and quarterback Jayden Daniels, Odighizuwa said UCLA will need to focus on containing the quarterback on the pass rush.

“We know he likes to scramble,” Odighizuwa said. “So it’s just being aware of that and containing him, and not letting him run up and down the field.”